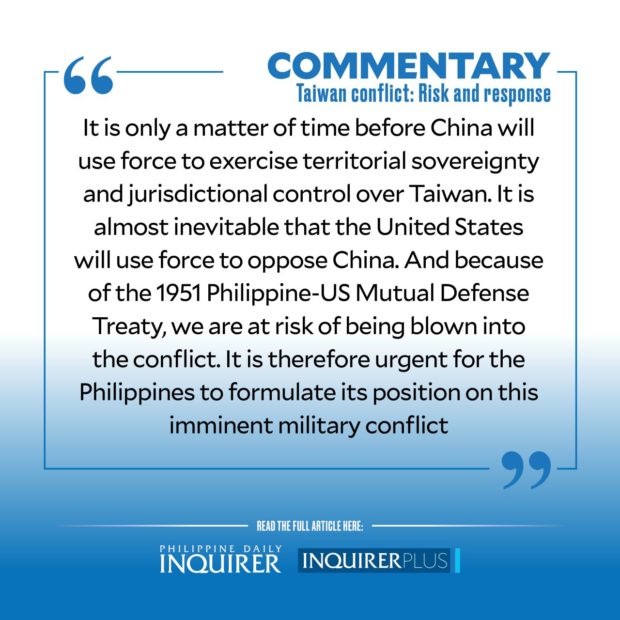 It is only a matter of time before China will use force to exercise territorial sovereignty and jurisdictional control over Taiwan. It is almost inevitable that the United States will use force to oppose China. And because of the 1951 Philippine-US Mutual Defense Treaty (MDT), we are at risk of being blown into the conflict. Therefore, the Philippines must formulate its position on this imminent military conflict.

At the core of the MDT is Article IV, stating that each party recognizes that “an armed attack in the Pacific area on either of the Parties would be dangerous to its own peace and safety and declares that it would act to meet the common dangers in accordance with its constitutional processes.”

Yet its proper interpretation requires references to the preambular clauses and Articles I, III, V, and VI, and alignment with the Philippine Constitution, existing laws, and treaty obligations.

The MDT covers military conflicts arising from: 1) an external armed attack on a “metropolitan territory or an island territory in the Pacific” under the jurisdiction of either party; and 2) an armed attack on the “armed forces, public vessels or aircraft in the Pacific” of either party. It does not include conflicts arising from an aggressive attack by the US or the Philippines against another county. The foreign affairs departments of the parties are to jointly determine the nature of any attack.

The MDT recognizes several responses. The default response is peaceful settlement through the United Nations Security Council (UNSC). An alternative is to “act to meet the common dangers”; that is to say, join the military conflict. Recourse to the latter must comply with constitutional requirements and with deference to any future UNSC measure. Another alternative response is noninvolvement.

Thus, would a US involvement in a military conflict over Taiwan trigger the MDT? What response should the Philippines adopt?

US involvement in a military conflict with China over Taiwan will not engage the MDT. Such conflict would not arise from an external armed attack on the US main territory or an island territory in the Pacific. Taiwan is clearly not US territory. Moreover, in 1952, the US published a map depicting the coverage of the MDT, and Taiwan, its waters and airspace, are not part of the treaty area.

Too, given recent statements and actions of the US, the conflict would not be one from an aggressive attack by China on a US force, vessel, or aircraft. This last statement may be controversial but it is firmly rooted in Philippine constitutional, statutory, and treaty instruments.

The Philippines recognizes that the land mass, internal waters, and territorial sea of Taiwan as well as their supervening airspace are part of the territory of and subject to the full sovereignty and jurisdiction of China. Although the Philippines voted against UN General Assembly Resolution No. 2758 (1971) removing Taiwan from the UN while restoring China to its seat in the UNGA and granting it a seat in the UNSC, the Philippines signed in 1975 a joint communiqué with China whereby it recognized the Government of the People’s Republic of China “as the sole legal government of China” and acknowledged that “there is but one China and that Taiwan is an integral part of Chinese territory.” This bilateral instrument is binding under the Philippine Constitution. It has been applied by the Supreme Court in at least four cases and enforced by the executive and legislative departments of the Philippine government.

Thus, any military involvement of the US in Taiwan, which is premised on the independence of Taiwan, would not qualify as defensive. The MDT itself proscribes a response from the Philippines that would violate its own national laws and international obligations affirming China’s territorial sovereignty over Taiwan. The only legitimate response on the matter by the Philippines is active noninvolvement.