Poverty seen from below | Inquirer Opinion

Poverty seen from below 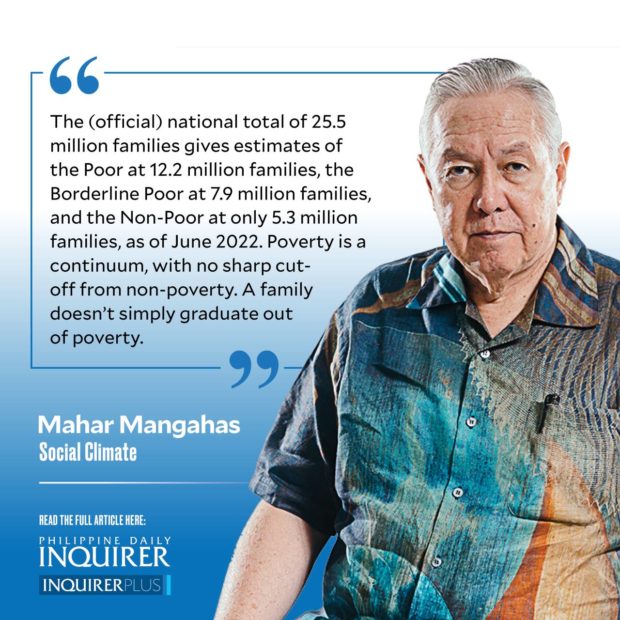 The scale of poverty as seen from below, by the people, is very much larger than as seen from above, by the bureaucracy. Nearly half of household heads in the nation rate their families as Mahirap (Poor), only one-fifth rate themselves as Hindi Mahirap (Not Poor), and nearly one-third feel on the border (“Second Quarter 2022 Social Weather Survey: 48% of Filipino families feel Poor; 31% feel Borderline Poor, 21% feel Not Poor,” www.sws.org.ph, 8/2/22).

The proportion of Self-Rated Poor (SRP) households varies widely across the country. In June 2022, SRP-households made up 41 percent in the National Capital Region (NCR), 36 percent in the Balance of Luzon, 64 percent in the Visayas, and 62 percent in Mindanao. This is one of the rare times that NCR is not the least poor of the four areas. But Visayas and Mindanao are always the two most poor.

Poor people have reasonable needs. In June 2022, the national Poor said they needed at least P15,000 for monthly Home Expenses in order not to feel poor, and that they lacked P6,000 to reach their minimum. These are called the Self-Rated Poverty Threshold (SRPT) and the Self-Rated Poverty Gap (SRPG) respectively. The numbers are medians, i.e., the mid-points of the answers of the Self-Rated Poor. They specifically exclude transportation, smartphone load, and other work-related expenses.

The poverty thresholds vary by area, in relation to the cost of living. In June 2022, their medians were P15,000 in both NCR and Balance Luzon, a new record-high P20,000 in the Visayas, and P10,000 in Mindanao. There appears to be a special need to contain price inflation of home consumption items in the Visayas.

Poverty is dynamic. There have now been 134 national surveys of Self-Rated Poverty in the Philippines, ever since 1983, with question-wordings unchanged. The SRP rate of 48 percent last June is a statistically significant 5-point increase from 43 percent last April (the national error margin is plus/minus 3 points). The estimated number of poor families rose from 10.9 million in April to 12.2 million in June.

The latest quarterly rise in poverty stemmed from a 16-point surge in the Visayas and a 9-point surge in NCR; these are significant since the error margin for an area percentage is plus/minus 6 points. The point changes in Mindanao (+2) and Balance Luzon (+1) were insignificant.

Poverty under the last three administrations. I would relate the poverty data for 2001-10 with the time of Gloria Macapagal Arroyo, 2011-16 with that of Benigno S. Aquino III, and 2017-22 with that of Rodrigo Duterte. These are calendar years, on the assumption that the first six months of a new administration are too early to reflect changes in policy.

In the first three years under Duterte, the quarterly averages were: 46 in 2017, 48 in 2018, and 45 in 2019; the annual average was 46.3. In pandemic year 2020, SRP was only surveyed once, in November (at 48 percent), due to the transportation lockdown earlier that year; it probably zoomed in the earlier quarters, as hunger and joblessness both did. In 2021, the quarterly SRP percentages were 49, 48, 45, and 43, averaging 46; thus, national poverty this June is a reversal to early 2021. Poverty has not yet recovered to pre-pandemic times.

The data on poverty and other conditions as seen from below are real, plentiful, and practical to use. The quarterly SWS surveys also cover Food Poverty, Food Poverty Thresholds, and Food Poverty Gaps; the length of time the family has been Poor or Not Poor; the family’s suffering from involuntary hunger, mild or severe; and many other indicators.

The analysis of human well-being is too important to be limited by data as seen from above.