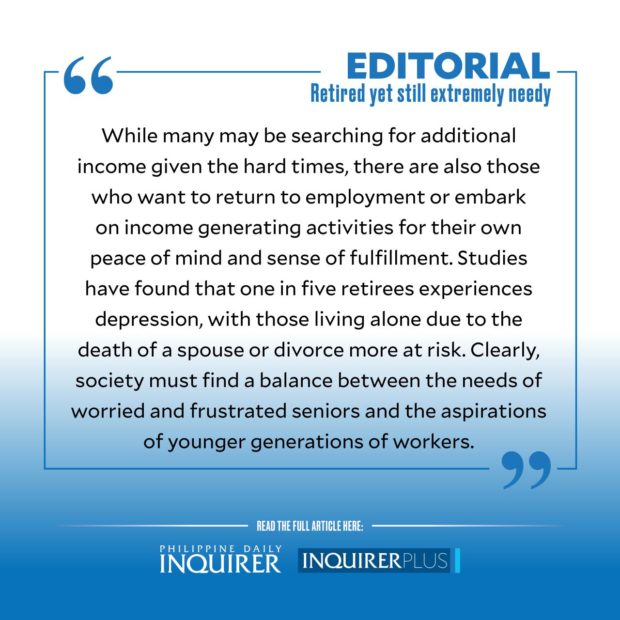 In 2010, a Hollywood movie was released with the intriguing title “RED.” The term stands for “Retired, Extremely Dangerous,” which perfectly describes the main characters, a team of once-deadly CIA assassins who emerge from retirement to help their leader Frank Moses (Bruce Willis) survive several murder attempts as part of a political plot.

The makers of the movie seem to have enjoyed fielding the cinematic irony of a group of aging characters upstaging—and outgunning, outfighting, outwitting—operatives much younger, stronger, more limber, and better armed than they.

This is because, in the eyes of society these days, once folks reach a certain age (around 60-65 years in most industrialized economies) they are deemed “over the hill” or past their prime, thus necessitating that they be “put out to pasture.” The justification is that, having put in almost 40 years of daily toil, workers deserved some rest and recreation, receiving some financial support in exchange for stepping out of the labor force.

But there is another motive underpinning the mostly mandatory retirement of workers of a certain age. This is the need to replace aging, less efficient, less energetic employees with younger, fresher blood, youthful workers who can bring fresh ideas and enthusiasm to their work. On a national scale, mandatory retirement also serves to clear the way for younger workers, forestalling restiveness among the youthful, productive segment of the population.

Lately, however, proposals have been made to open up the employment field to folks who have reached retirement age, with National Economic and Development Authority (Neda) head Arsenio Balisacan observing that “our institutions, our practices, our regulations have to evolve and respond with the changing times.” The country’s socioeconomic planning secretary noted that life expectancy has been rising in many societies, including in the Philippines, and where the number of senior citizens has risen, “society has opened up opportunities for the age-old members of their population.”

But it’s not only the aging demographic that is instigating a rethink of retirement policies. Given the harsh economic times, Filipinos now confront, more seniors are venturing back to the labor market, finding that their savings and retirement funds are falling short in meeting their and their family’s needs for essentials like food, utilities, health care, transportation, housing.

Balisacan also observed that given the nature of today’s employment, employers “could tap seniors’ competencies and offer jobs attuned to their educational attainment.”

The Neda chief’s concern was triggered by the latest labor force survey of the Philippine Statistics Authority that showed that while 570,000 Filipinos joined the labor market in June alone, most of them in the age bracket 25-34, it also found “an increasing number of labor force entrants from higher age groups or those above 35 years old.” National Statistician Dennis Mapa also revealed that labor force participation for those age 65 and above—or the number of senior citizens either working or actively looking for a job—increased to 38.2 percent from 34.9 percent last May.

But not all employers, including government policymakers, are sanguine about opening up the labor market to those who have already retired.

Labor Secretary Bienvenido Laguesma, for one, said a “thorough study” must first be made before removing the mandatory retirement age. “That is not a simple matter that should be decided immediately,” he said. “We need [a] careful study,” including if existing laws that run contrary to the proposal may need revising. There is also the thorny problem of recalibrating the budgets of social security agencies like the Social Security System and the Government Service Insurance System if there is a sudden influx of already retired workers returning to the workforce.

And what of the retirees themselves? While many may be searching for additional income given the hard times, there are also those who want to return to employment or embark on income-generating activities for their own peace of mind and a sense of fulfillment. Studies have found that one in five retirees experiences depression, with those living alone due to the death of a spouse or divorce more at risk. “Retirement increases the chances of suffering from clinical depression by around 40 percent, and of having at least one diagnosed physical illness by 60 percent,” said the UK think tank Institute of Economic Affairs.

Clearly, society must find a balance between the needs of worried and frustrated seniors and the aspirations of younger generations of workers.