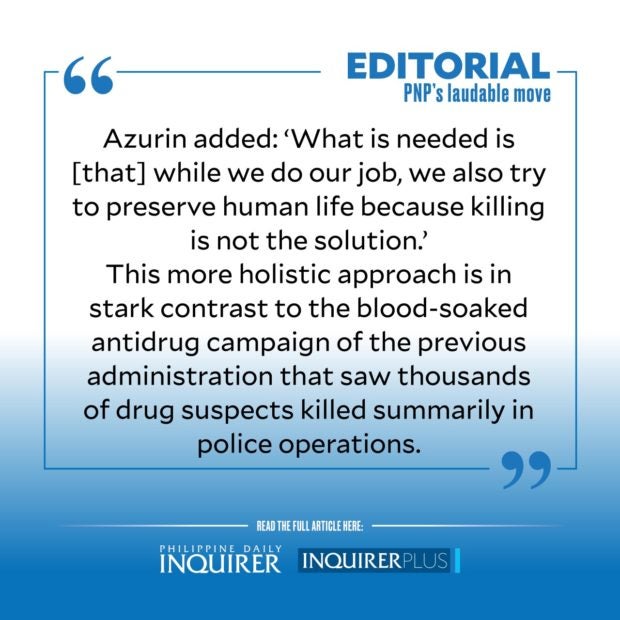 Some welcome news at last!

After a stream of bad news—the continuing rise in COVID-19 cases, the worsening public transport problem, runaway food prices, the inevitable floods and landslides after heavy rains—there’s at least room for optimism on some issues: the war on drugs and police abuses.

On Sunday, Philippine National Police Chief Gen. Rodolfo Azurin Jr. said that while the PNP would continue to clamp down on drugs, it would also study “the root” of the problem. “I think that is the very basic approach we could take,” he said.

Azurin added: “What is needed is [that] while we do our job, we also try to preserve human life because killing is not the solution.”

This more holistic approach is in stark contrast to the blood-soaked antidrug campaign of the previous administration that saw thousands of drug suspects killed summarily in police operations. Former president Rodrigo Duterte, whose campaign promise of eliminating the scourge of drugs in “three to six months” led to extrajudicial killings, is facing an investigation from the International Criminal Court (ICC) for crimes against humanity. Despite the brutality, Duterte himself admitted just weeks before his term ended, that he was unable to end the country’s drug problem, describing as “hubris” his self-imposed deadline on doing the job.

Under the new administration, Azurin said he will make an accounting of the drug problem and involve the community in dealing with it. “We will ask the barangay captain and the leaders there, so we will know the drug situation,” he said. “We will find out what intervention we have to do.”

Unlike Duterte, who lambasted the Catholic Church for calling him out on the drug-related killings, Azurin said he plans to enlist the help of the Church and other spiritual leaders to serve as counselors and life coaches to reform the police.

In his speech after he assumed his post, the PNP chief said his peace and security framework—dubbed “MKKK” for “malasakit, kaayusan, kapayaan, at kaunlaran” (concern, order, peace, and progress)—would be complemented by the “Kasimbayan” program, which stands for “kapulisan, simbahan, at pamayanan” (police, church, and citizenry).

Under the program, volunteer church leaders, regardless of religious affiliation, will be tapped to help the police “nurture relations” with members of the community who, in turn, will be organized as peace advocates.

Said Azurin: “Regardless of whether it’s a rumor, we need to know which police officers are prone to misconduct. We should immediately address even the smallest problems with our personnel by getting feedback from our communities.”

While his words are reassuring, the police chief should put muscle to his lofty aim. For a start, he can publicly disavow and discard the previous government’s “Oplan Double Barrel,” the template that governs police operations against drug suspects. It consists of “Oplan High-Value Target” to come after big time drug sellers, and “Oplan Tokhang,” which zeroes in on small time drug pushers.

Similarly holding the police to a higher standard also appears to be President Marcos Jr.’s tack in handling these law enforcers who, previously were assured of Duterte’s protection for “doing their job,” have become notorious for abusing their authority amid a culture of impunity.

During Monday’s celebration of the PNP’s 121st anniversary, Mr. Marcos reminded the police that the use of force in their operations must be “reasonable, justifiable, and only undertaken when necessary.” He added: “Execution of authority must be fair, it must be impartial.”

The President also reminded the PNP to conduct its business with utmost integrity and accountability. “Let us not allow even a hint of dishonesty and abuse to enter into that narrative. You are the vanguards of peace. You set the example of the kind of leaders that we need to overcome the hindrances of today,” Mr. Marcos said.

The President’s nonmention of the drug war at all in his first State of the Nation Address might be an encouraging sign as well. Could this mean that in contrast to his predecessor who made the drug issue the narrow centerpiece of his administration, Mr. Marcos would view with a wider perspective the country’s more pressing problems, its economic recovery, for one?

Sen. Ronald dela Rosa, the first implementer of Duterte’s Oplan Double Barrel, warned that there should be no letup in the offensive against drug syndicates, as a softer stance might lead to the return of narcopoliticians and ninja cops. Dela Rosa is not the right person to give advice on how the new administration should pursue the problem of illegal drugs, considering that he has blood on his hands and also stands accused in the ICC with his former boss.

The fact is that the Duterte drug war only led to corruption and abuses in the police ranks on top of a horrific death toll. Isn’t it time to try something different?