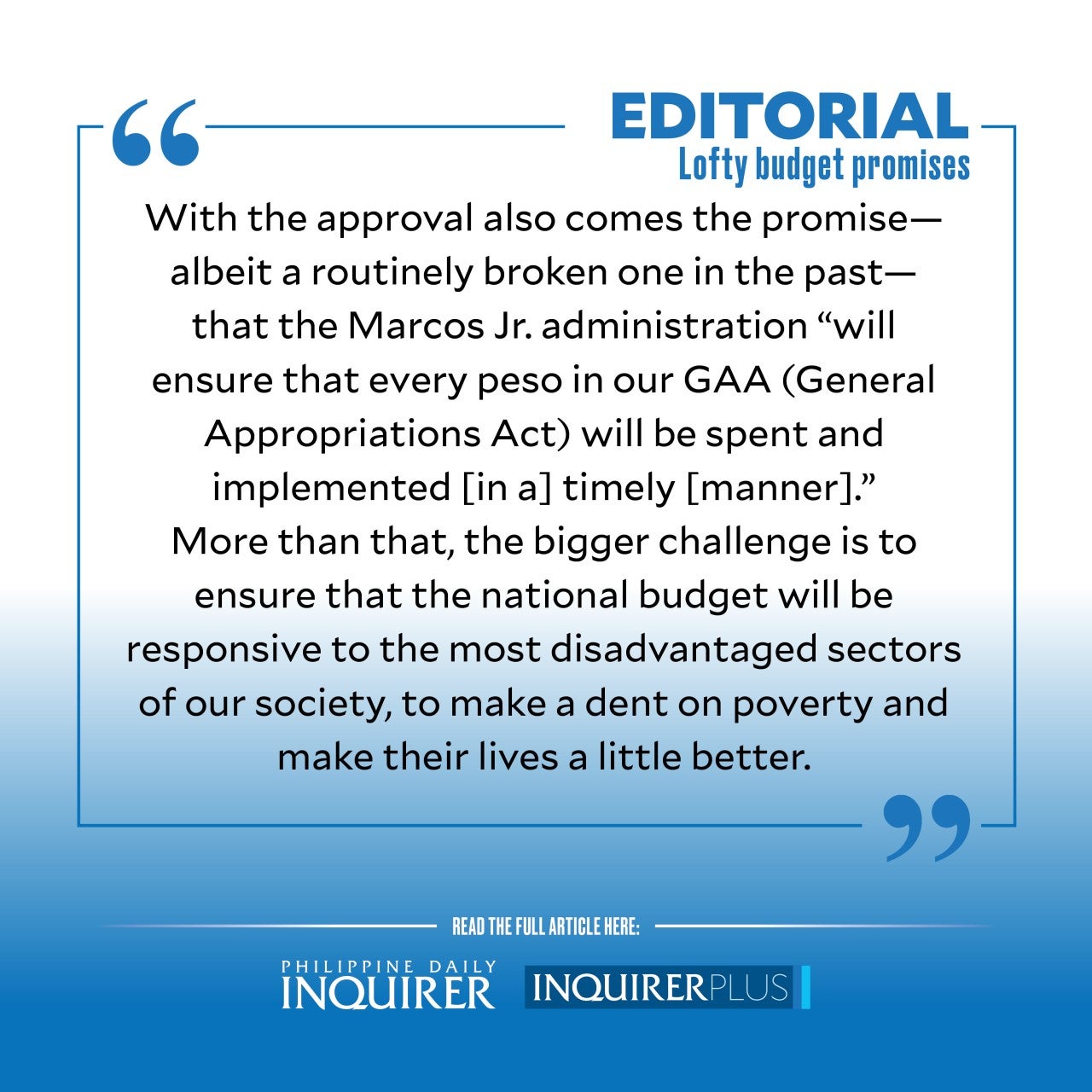 The Marcos Jr. administration is set to submit to Congress on Aug. 22 its National Expenditure Program for 2023 that will detail its priority projects and programs meant to “promote a broad-based and inclusive recovery and growth” following setbacks caused by the pandemic.

While Filipino taxpayers eagerly await the concrete expression of President Marcos Jr.’s general policy thrusts as expressed in his first State of the Nation Address, their optimism is tinged with trepidation: Where would the needed funds come from?

Indeed, the previous Duterte administration’s economic managers had proposed a fiscal consolidation program that includes the possible imposition of new or additional taxes. It’s a terrifying prospect, given that the burden of the lingering pandemic has been worsened by the staggering cost of fuel and the resulting runaway prices of basic commodities.

The Duterte administration had pegged the 2023 budget ceiling at a record P5.268 trillion, an increase of 11.5 percent from last year’s P4.51 trillion, but a modest 4.9 percent increase over the 2022 appropriations of P5.02 trillion. This was in consideration of the country’s already high debt burden and depressed revenue sources since recovery remains a work in progress.

But Pangandaman had been directed to work out the numbers to see if there was room to pitch a “slightly” bigger budget as the Marcos Jr. administration attempts to continue investing in the country’s economy and “outgrow” the debt burden that’s seen to hit a record P13.42 trillion by the end of the year.

So far, the broad policy directions discussed over recent Cabinet meetings have been encouraging, with no mention of disproportionately increasing the budget for anti-insurgency activities, as well as bloated intelligence funds, which had been among the widely criticized and defining features of the previous administration’s spending programs.

Instead, Marcos Jr. officials have been making it a point to assure Filipinos that despite the narrower fiscal space in 2023, the government will start off on the right foot by, among others, continuing to support the vulnerable and disadvantaged. This includes the jobless, whose ranks increased to 2.93 million in May from the April level, which is equivalent to an unemployment rate of 6 percent.

Then there is the promise to pay attention (and money) to agriculture, to uplift the lives of toiling farmers and achieve food security amid global disruptions. And how about the education sector or the health care system, both of which have suffered immensely from the pandemic lockdowns?

The Marcos Jr. administration also wants to take the Duterte government’s ambitious “Build, Build, Build” infrastructure program up a notch and “build better more” by spending 5 to 6 percent of gross domestic product (GDP) on it over the next six years.

If this comes to fruition, infrastructure spending would reach P2.38 trillion in 2028, equivalent to a record high 6.3 percent of GDP. This would contribute to accelerating the country’s economic growth to up to 8 percent next year until 2028, and reducing the country’s poverty level.

The Duterte administration had said that its aim was to make the Philippines an upper middle-income country as early as this year, but that the unexpected pandemic ruined those plans. Mr. Marcos wants to pick up where the past administration left off and achieve this goal by 2024, bringing down poverty levels to a low 9 percent by 2028 from the current 23.7 percent.

How the present administration intends to do just that will be spelled out in the detailed budget plan that Pangandaman hopes would pass the scrutiny of both houses of Congress and be approved by the end of the year, so it can start 2023 right.

With the approval also comes the promise—albeit a routinely broken one in the past—that the Marcos Jr. administration “will ensure that every peso in our GAA (General Appropriations Act) will be spent and implemented [in a] timely [manner].”

More than that, the bigger challenge is to ensure that the national budget will be responsive to the most disadvantaged sectors of our society, to make a dent on poverty and make their lives a little better.

For overburdened Filipinos who will foot the bulk of the spending bill and have been generous enough to give the Marcos Jr. administration a chance to make good on its lofty promises, it is the least of what they deserve from their government.

Read Next
Mother tongue as medium of instruction
EDITORS' PICK
Powered by style, innovation and passion
House energy committee chair Arroyo bats for cheap electricity
PH may import sugar around October if supply runs out
Why Tagle is a leading papal contender
PH resumes talks with China on Chinese-funded transport projects
A laptop that maximizes your WiFi so you can maximize your productivity
MOST READ
U.S. actor Anne Heche is taken off life support 9 days after car crash and dies
PVL: Celine Domingo gets big surprise as Creamline’s Finals MVP
Imee Marcos bares illegal importation of white onions
John Arcilla cries foul over death threats for his ‘Ang Probinsyano’ role: ‘Serye lang, walang personalan’
Don't miss out on the latest news and information.