Yes, there’s a bully in the West Philippine Sea. No, it’s not America 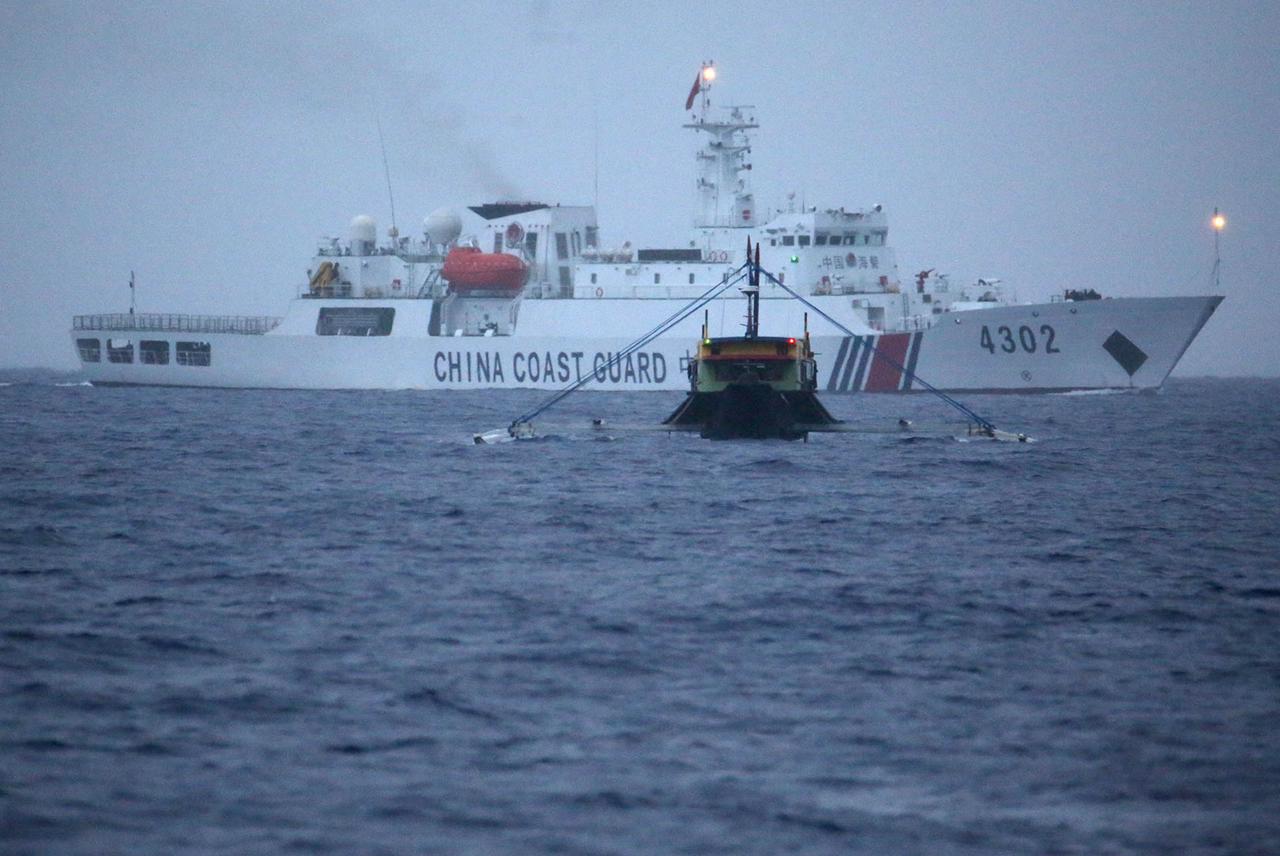 China Coast Guard ship with bow No. 4302 shadows one of two Philippine Navy boats on a resupply mission to the BRP Sierra Madre at Ayungin Shoal in the West Philippine Sea on June 21, later radioing troops on the rusting warship that they face consequences if they “insist on making trouble.” MARIANNE BERMUDEZ / Philippine Daily Inquirer

Last week, in response to US Navy Secretary Carlos del Toro’s reaffirmation of America’s treaty commitment to the Philippines, China’s embassy in Manila issued a statement in which it made up a new slogan. It accused the United States of something called “navigation bullying”.

Put very simply, this is a preposterous notion—one which deserves only ridicule in response.

After all, Beijing has had over 40 years to get accustomed to America’s freedom-of-navigation operations (FONOPS) program, and to realize that it has not substantially changed in that time. Its application has always been worldwide and even-handed, and its objectives transparent.

If there is still confusion about this, China’s diplomats are invited to read the annual public releases of FONOPS activities, in which the US government clearly enunciates the purpose of the program, which is “to reinforce international law peacefully and in a principled, unbiased manner.”

Do these other countries enjoy having an American warship occasionally pass by to remind them that their claims are excessive? I’m quite sure they do not. Yet they generally endure it with little protest, because they recognize that this is nothing new.

The United States has established through long practice its commitment to upholding freedom of the seas under international law, and the overwhelming majority of countries accept that, even if their own claims are demonstrated to be more than the law allows, the rules-based order ultimately benefits them as well.

In fact, China’s own rise as an economic power was fueled by decades of open sea lanes, stability and free trade this fair and equitable international regime has helped ensure. Now, having squeezed what it wanted out of this order, Beijing wants to write a new one in which it gets much more than its share, and its neighbors are left begging for leftovers.

So clearly FONOPS are not “bullying”, and they are not some provocatively new tactic. Nor is America’s mutual defense treaty with the Philippines something novel. The only new thing to see here is the extreme aggressiveness of the real bully on the playground—the maritime forces of the People’s Republic of China.

The Chinese embassy’s press release laughably referred to the South China Sea as “our common home”. What a wonderful sentiment! If only China’s practices matched this rhetoric, America’s senior officials would not need to constantly reassure its allies of its commitment to its treaty obligations.

In fact, we should all encourage China to embrace this idyllic common-home vision. Yet what we see instead is rank hypocrisy in the form of a large and increasingly bellicose nation, making and enforcing absurdly vast maritime claims that encroach right up across its neighbors’ legal property and almost to their front doors.

No country experiences this aggression as painfully as the Philippines, whose fishermen are daily intimidated and restricted from their traditional waters, and whose resupply missions to its own troops aboard its own ship are warned, inspected, blocked and even water-cannoned as Beijing waits for the BRP Sierra Madre to rust away beneath the feet of its lonely defenders.

Is this what China’s embassy means when it says they have “kept their differences and disputes in a proper place”? Or do they mean that the Philippines’ proper place is wherever their Emperor in Beijing allows it to exist?

Does the Sierra Madre pose a threat to China’s security? Of course not. It merely has the audacity to exist within China’s preposterously expansive nine-dash-line claim—a claim the United Nations Arbitral Tribunal correctly found to be illegal in a ruling so sweeping that one might almost say it was laughed out of court.

Unfortunately nobody’s laughing, because China has abandoned all pretense of respect for law, rules or norms, and has adopted its own standard—one which effectively says, “Everything I claim is mine.”

So who exactly is the bully?

(Raymond Powell is a fellow at Stanford University’s Distinguished Careers Institute in Palo Alto, California. He recently concluded a 35-year career in the U.S. Air Force, during which he served as his country’s air attaché in Vietnam and as the senior defense official/defense attaché in Australia.)

Read Next
Lofty budget promises
EDITORS' PICK
House energy committee chair Arroyo bats for cheap electricity
Look Through: The fate of impounded stray dogs
Unleash the photographer in you this World Photography Day with vivo smartphones
What to watch out for when selecting a video surveillance solution
Palace warns sugar hoarders after raid on Pampanga warehouse
Metro Manila’s COVID-19 cases on downward trend, but surge not over — OCTA
MOST READ
LOOK: Miel Pangilinan dazzles in glittery pre-debut shoot
Remains of two children found in suitcases auctioned in New Zealand
Palace warns sugar hoarders after raid on Pampanga warehouse
Alice Dixson to critics of her yellow gown at GMA Gala: ‘’Wag masyadong judgmental’
Don't miss out on the latest news and information.