Mother tongue as medium of instruction 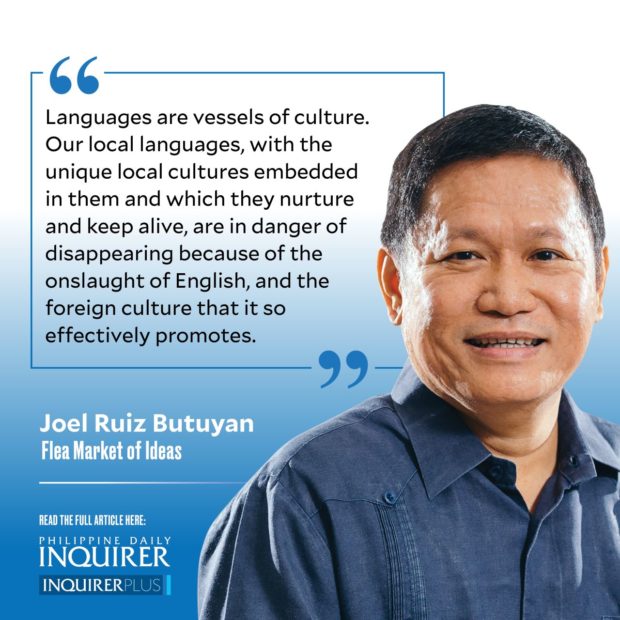 My wife and I are among the many parents who are very concerned about the long-term effect on kids of the prolonged isolation caused by the lockdowns. For more than two years now, kids have been prevented from playing with other kids. They’ve also been deprived of socialization, inherent in physical attendance in schools.

We have a little boy, Gabriel, who will turn four years old next month. He was only one-and-a-half years old when the COVID lockdowns started in 2020. He has spent more than half of his life largely isolated from other kids. Kids’ early years are important formative years, and we’re concerned that the prolonged isolation may cause him to grow up with social skills handicap.

Our boy is eligible to enroll in a nursery school this school year, and we’re eager for him to physically attend school mainly because he will finally be able to enjoy the company of other kids.

When we inquired at our local Catholic Church, which operates a nursery school, the principal informed us that they will be holding three days of face-to-face and two days of online classes per week. That’s so much better compared to the past two years for our son.

We were, then, told that the language of instruction is English. The school head added that the kids who attend their nursery classes, from middle-class families, are trained to speak English at home. They’re also exposed daily to the English language because of the video games and cartoon programs they watch extensively.

This got me worried because we speak to our son purely in Ilocano. My wife and I resolved that, like us, he should be versed in our mother tongue so that he will grow up identifying with and be more appreciative of our local culture. We are also horrified at the thought that he won’t be able to communicate with our townmates in our dialect if we converse to him in English.

When I inquired with the barangay daycare center, one teacher shared that she has observed a growing number of nursery kids who speak English as their first language, for the past few years. These are kids not from wealthy families, mind you, but from underprivileged families in the barrios. This is the consequence of mobile phones becoming the default nannies of kids. So many of our children now, rich and poor alike, spend so much time on mobile phones watching games, cartoons, and programs that use English. I was told that these kids have a hard time when they go to public schools where the medium of instruction is the local dialect for kindergarten, and Grades 1, 2, and 3. English becomes the instruction medium in Grade 4 onward.

I think that the use of the local language as means of instruction for the first four years of schooling is an outstanding policy. The complaints that are being raised against it are implementation shortcomings and not policy problems. The use of local language as medium of instruction has become even more important now, given what has been happening to our children as described earlier.

Languages are vessels of culture. Our local languages, with the unique local cultures embedded in them and which they nurture and keep alive, are in danger of disappearing because of the onslaught of English, and the foreign culture that it so effectively promotes.

Recently, President Marcos Jr. announced that he will consider bringing back English as medium of instruction in our schools. This means removing the local dialects as instruction mediums in all grade levels. Mr. Marcos cites our declining advantage in foreign employment as reason.

If our kids have deteriorating ability in English, the solution is to strengthen the quality of English instruction for Grade 4 onward. It is not to extend our shabby English teachings in the lower grades.

Our leaders must realize that the way to progress is not to compete for menial jobs abroad by having the advantage of the English language over other Third World countries like Bangladesh, Sri Lanka, and Indonesia. The path to real progress is to emulate wealthy nations like European countries, Japan, South Korea, and China. These prosperous but non-English speaking countries bestow to their kids an education legacy steeped in critical thinking, creativity, and entrepreneurship.

Read Next
My year of ROTC
EDITORS' PICK
House starts inquiry into sugar import mess
Pimentel: Gov’t buyers knew of cheaper laptops but still got expensive ones
House energy committee chair Arroyo bats for cheap electricity
‘Opportunity’: PH senior population on the rise
A laptop that maximizes your WiFi so you can maximize your productivity
Powered by style, innovation and passion
MOST READ
Imee Marcos bares illegal importation of white onions
U.S. actor Anne Heche is taken off life support 9 days after car crash and dies
PVL: Celine Domingo gets big surprise as Creamline’s Finals MVP
Pimentel: PS-DBM knew of cheaper laptops but still got expensive ones
Don't miss out on the latest news and information.