Duterte legacy: A bonfire of institutions? 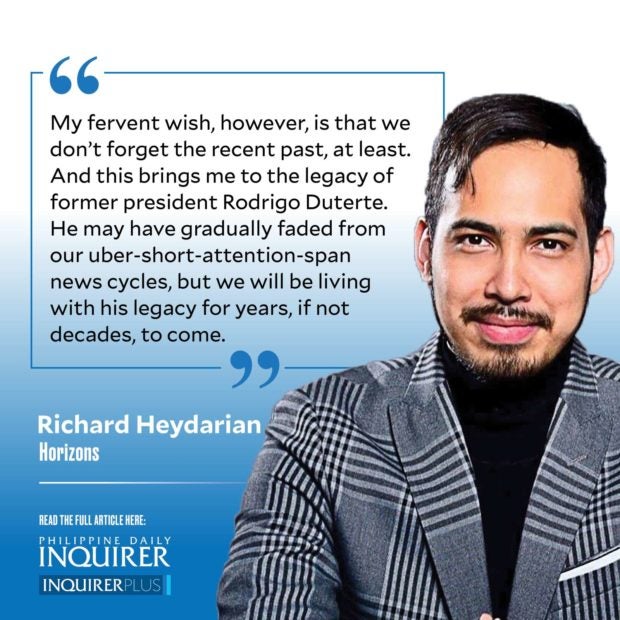 The return of the Marcoses to Malacañang has, quite understandably, dominated the political headlines. Not only at home, but all across the world, many are wondering how the scions of a former strongman managed to claw their way back to the pinnacle of power in Asia’s oldest democracy. Dear reader, you can just imagine the headlines in major dailies and on global news platforms.

History—as in meta-narratives based on verified data and peer-reviewed studies—is clearly not our national forte; otherwise, how did we arrive at the current situation, whereby some even dare to dismiss history as nothing but “gossip” (tsismis)!? Imagine what the victims of the darkest years in modern Philippine history are feeling now amid the denialist-revisionist spiral, which is steadily colonizing our public discourse?

My fervent wish, however, is that we don’t forget the recent past, at least. And this brings me to the legacy of former president Rodrigo Duterte, who skipped the inauguration of his successor altogether in order to swiftly return to his hometown. He may have gradually faded from our uber-short-attention-span news cycles, but we will be living with his legacy for years, if not decades, to come.

FEATURED STORIES
OPINION
Education and the state of the Filipino family
OPINION
Go for the ‘big circle’!
OPINION
The need for a Philippine CDC

The 2016 elections represent one of the most seismic events in Philippine history. It produced a presidency unlike anything before, both at home and, arguably, even internationally. Despite winning just under 40 percent of the votes on the heels of a bizarrely polarizing campaign, Duterte swiftly became the most popular Filipino president since the introduction of authoritative surveys.

His trust rating climbed to as high as 90 percent early in his presidency, a mind-boggling rating that resurfaced in recent years. At one point, he even had the highest trust rating of any democratically elected leader in the world. He was unique in every sense of the word. Though hailing from an established political family in the country’s “Deep South,” he was the ultimate outsider as far as the “Imperial Manila” establishment is concerned.

And to be fair, Duterte deployed his unprecedented political capital for a number of consequential and even commendable initiatives. Think of his courageous advocacy for Bangsamoro autonomy, as well as the doubling of infrastructure spending (above 5 percent of gross domestic product) under his watch.

And to be honest, I also initially supported, as any patriot should, his call for greater independence from our traditional partners in favor of a more “independent” foreign policy. What I have always opposed, however, is exchanging an established strategic patron for predatory alternatives.

I have already extensively written, including in these august pages, on the human rights catastrophe and illiberal practices under the previous president. So I won’t repeat them here. On a more macro level, however, let me emphasize that the greatest shortcoming of Duterte was his inexplicable inability to translate massive political capital into effective state-building.

In many ways, Duterte’s reign can be summarized as a bonfire of institutions (I’m indebted to fellow columnist Randy David for coining the term, and to sociologist Nicole Curato for pointing this out). Let me briefly discuss three key elements, which have undermined state institutions under the former president.

First of all, Duterte’s ascent to power reinforced the myth of what historian Julia Lovell has described as “political volunteerism,” namely the fantastical idea that a decisive, authoritarian leader can single-handedly address complex social problems in the 21st century. This largely explains, for instance, why Duterte’s drug war was based less on modern public policy and evidence-based science than penal populist antics.

Second, his reign and unprecedented popularity were more driven by performativity rather than actual performance. Impression-management and headline-grabbing pronouncements often trumped careful policy deliberation. The great scholar of populism Ernesto Laclau described this phenomenon as the “empty signifier”: think of the “dolomite beach” in Manila Bay, which offended the sensibilities of every sound expert.

And lastly, a major problem under the previous president was the rare combination of arbitrariness and absenteeism, which amused too many at the expense of our emaciated institutions. To build a strong state, which is essential to long-term national development, a leader must invest in the rule of law, value long-term planning, and, above all, rely on evidence-based policymaking. Consummate populists, however, often rely on optics and myths. Duterte raised many good questions. Can’t say the same about his answers.

Read Next
S&T please
EDITORS' PICK
Why Tagle is a leading papal contender
Powered by style, innovation and passion
KWF has no power to ban, censor written works – Lagman
In Borongan, nuns play hoops (not mahjong)
A laptop that maximizes your WiFi so you can maximize your productivity
House energy committee chair Arroyo bats for cheap electricity
MOST READ
Why Tagle is a leading papal contender
Zubiri on SRA mess: Shameful, disgusting
My neighbor FVR: From soldier to president
Arjo Atayde reveals proposal to Maine Mendoza was ‘more than a year’ in the making
Don't miss out on the latest news and information.