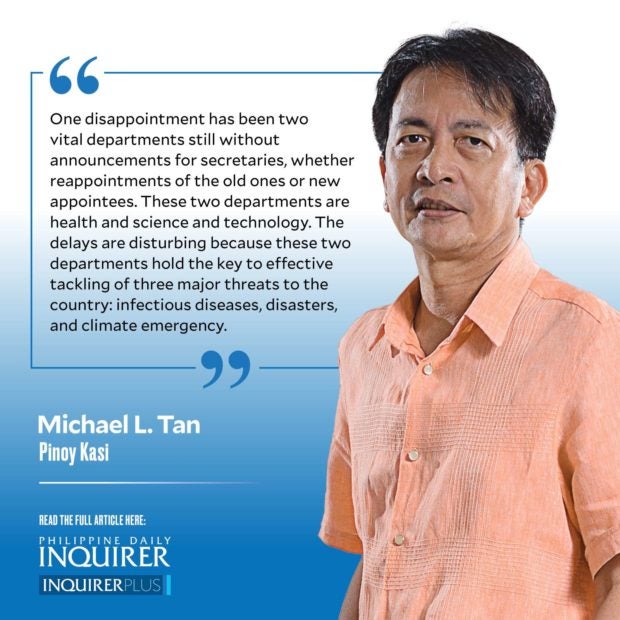 Whenever a new administration takes over in a country—whether through elections, coups, or revolutions—the attention shifts, after the dust settles, to the new ministers or secretaries. The appointments are usually a good gauge of the new administration’s priorities, as well as internal dynamics that shape those priorities.

The very first Cabinet appointee after the May elections was Vice President Sara Duterte, who was appointed education secretary, a kind of consolation prize, commentators observe, for the new vice president, who would have preferred the defense portfolio.

The next appointments were clearly intended to calm the nerves of the financial sector, and it seems the business people were pleased with the appointments to the National Economic and Development Authority, Department of Finance, and the Bangko Sentral ng Pilipinas.

The appointments continued, and are continuing, but one disappointment has been two vital departments still without announcements for secretaries, whether reappointments of the old ones, or new appointees. These two departments are health and science and technology.

The delays are disturbing because these two departments hold the key to effective tackling of three major threats to the country: infectious diseases, disasters, and climate emergency.

I want to focus on the need to have appointments for secretaries and undersecretaries to the Department of Science and Technology (DOST) because this agency has traditionally been underrated, and the country can’t afford more of that neglect.

I’d like to think that maybe the new government is seriously thinking of keeping the incumbent secretary, Dr. Fortunato de la Peña, as well as his undersecretaries, which would be a good move with all their bold and innovative programs.

Don’t think of R&D being conducted by women and men in white coats in air-conditioned laboratories. The bulk of the army of researchers is everywhere and I mean everywhere. Many Filipinos are unaware that we already have a Philippine Space Agency. No astronauts yet but our scientists have deployed micro-satellites (Diwata, Maya) that monitor climate, land, and aquatic resources, and how they are used with a slew of applications, from food production to national defense.

DOST’s projects provide training grounds for scientists. Many Filipino families have benefited as well from the Science Education Institute (SEI) scholarships for college students pursuing science degrees, currently still limited to the natural sciences although it’s encouraging to see social sciences starting to make the list of eligible degree programs, geography for example. Under De la Peña, degree programs in industrial design have also been included in the SEI list and they actually fall under Fine Arts.

If we have National Artists being honored and supported to continue research and providing advice to the government, DOST has its National Academy of Science and Technology with a host of activities involving National Scientists and National Academicians, making sure they (we) don’t lapse into passive retirement—I can assure you they make us work hard, including mapping out directions for very specific concerns (e.g., food security). I also see the beginnings of what could be a citizens’ science, getting lay people, as well as students still in high school and college, to get involved in science-based projects. The needs are especially pressing in what I mentioned earlier—infectious diseases, disasters, and climate emergency—which are actually interrelated.

The needs are so terribly urgent. For example, because of COVID-19, the Duterte administration rushed legislation to set up a Virology Science and Technology Institute of the Philippines, which should speed up our responses to future public health threats, whether new diseases or re-emerging ones (which COVID-19 will become). This institute, which is supposed to be built in New Clark City in Capas, Tarlac, is not confined to laboratory research. It will, for example, involve veterinarians and wildlife biologists on the lookout for new viruses jumping from animal species into human populations.

Name the science, from aerospace to clothing technology, from food science to veterinary medicine, and you’re bound to have them working with or benefiting from DOST.

Read Next
Father and son; like mother, like son
EDITORS' PICK
House starts inquiry into sugar import mess
Pimentel: Gov’t buyers knew of cheaper laptops but still got expensive ones
House energy committee chair Arroyo bats for cheap electricity
‘Opportunity’: PH senior population on the rise
A laptop that maximizes your WiFi so you can maximize your productivity
Powered by style, innovation and passion
MOST READ
Imee Marcos bares illegal importation of white onions
Pimentel: PS-DBM knew of cheaper laptops but still got expensive ones
U.S. actor Anne Heche is taken off life support 9 days after car crash and dies
Is appointment of Comelec chair constitutional?
Don't miss out on the latest news and information.