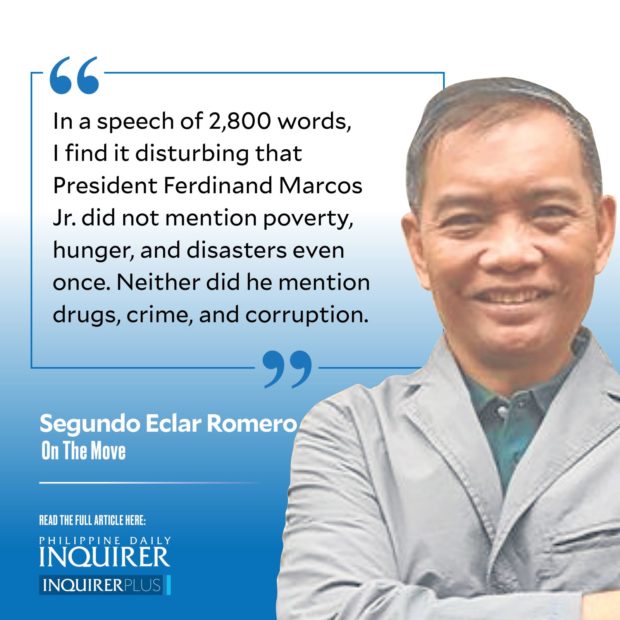 President Ferdinand Marcos Jr.’s inaugural speech was like a feast of bombastic words, as one would expect in a high school declamation contest. But there must be a way of seeing past the words and gleaning the national trajectory that has been sketched.

The most hair-raising statement is Mr. Marcos saying, “rest assured, I do not predicate success on the wide cooperation that’s needed. I will get it done. You will not get any excuses from me.” These ideas, evocative of the martial law “revolution from the center,” are diametrically opposed to the participatory democracy ideas espoused in the classic Gaebler and Osborne’s “Reinventing Government: How the Entrepreneurial Spirit is Transforming the Public Sector,” arguably a compilation of lessons learned from the debacles of authoritarian governments.

Mr. Marcos lauds former president Rodrigo Duterte. “You [he tells the people] got by, getting some of what you need with massive government help. And for this, I thank my predecessor for the courage of his hard decisions.”

FEATURED STORIES
OPINION
Education and the state of the Filipino family
OPINION
Go for the ‘big circle’!
OPINION
Retired yet still extremely needy

And this is where I get confused. Mr. Marcos then says, “Imagine how much more you’d achieve if government backstops instead of dictating your decisions. Always there to pick up when you fall, giving what you need to get past a problem. Imagine if it invested in your self-empowerment to bring it closer to taking on whatever challenges come.”

That is right on the money, if only Mr. Marcos focuses on developing resilience among the people so they do not fall and expect the government to bail them out.

But quickly, he shifts back to the idea that the government must serve the people. “But again, I will not predicate my promise to you on your cooperation. You have your own lives to live, your work to do—and there too I will help. The government will get as much done alone without requiring more from you. That is what government and public officials are for. No excuses, just deliver. It was like that, once upon a time.”

This equivocation of empowering the people or serving them prevents an appreciation of his attempt to identify the challenges ahead—the pandemic, public health food self-sufficiency, science-based education, oil and gas reserves, and the national language. In a speech of 2,800 words, I find it disturbing that Mr. Marcos did not mention poverty, hunger, and disasters even once. Neither did he mention drugs, crime, and corruption.

In one part of the speech, he awkwardly repeats the word “pangarap” nine times, using repetition as a rhetorical device a la Martin Luther King.

Then, Mr. Marcos says, “And if you ask me why I am so confident of the future, I will answer you, simply, that I have 110 million reasons to start with.” Did he mean that these 110 million people will be so empowered as to carry their weight through self-help and mutual help, or that they will be waiting for the illusory “ayuda” that the government is dangling?

Mr. Marcos can turn this country around, but only if he has the courage to introduce a disruptive transformation that will stop the rapacious elites from cornering all the opportunities and dividends of progress in the country.

The default situation is that Mr. Marcos will coast along until June 30, 2028, making dramatic decisions in the government that are all sound and fury, signifying nothing. Will Mr. Marcos end up like Duterte, ending his term, popular to high heavens, but an abject failure in all those things he promised to deliver in three to six months in 2016?

The dilemma of Mr. Marcos is that he nominally has the support of up to 70 percent of the electorate according to overly generous estimates, but he does not have the trust of the people who are creative, decisive, entrepreneurial problem solvers of the nation.

The 1987 Constitution needs a deep overhaul, to release the energies of the people for their own welfare, give the private sector a boost, and empower the people all across the archipelago. Can Mr. Marcos engineer this? Otherwise, he will simply be passing the presidential baton in 2028, and I shudder to visualize who will be receiving it.

Read Next
Duterte legacy: A bonfire of institutions?
EDITORS' PICK
KWF has no power to ban, censor written works – Lagman
House energy committee chair Arroyo bats for cheap electricity
Why Tagle is a leading papal contender
In Borongan, nuns play hoops (not mahjong)
A laptop that maximizes your WiFi so you can maximize your productivity
Powered by style, innovation and passion
MOST READ
Zubiri on SRA mess: Shameful, disgusting
Why Tagle is a leading papal contender
Arjo Atayde reveals proposal to Maine Mendoza was ‘more than a year’ in the making
My neighbor FVR: From soldier to president
Don't miss out on the latest news and information.