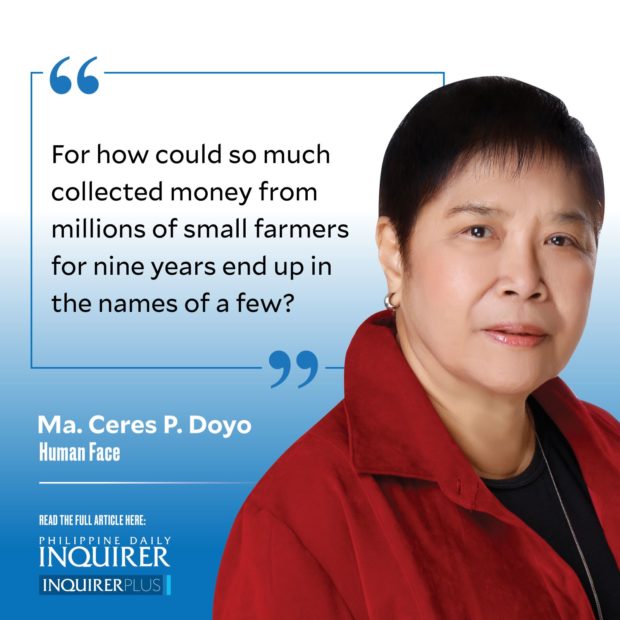 In the news recently was former president Duterte’s Executive Order No. 172 that will allow the government to tap the P75-billion coco levy fund to revive and modernize the coconut industry. The EO is also known as the Coconut Farmers and Industry Development Plan.

Much has been written about the billions in coconut levy collected from coco farmers during the Marcos Sr. regime that ended disgracefully in 1986. For decades after that, the farmers had clamored to get the issue settled once and for all—in the true owners’ favor, they had hoped. Layers upon layers of corporate and legal schemes had all but suffocated the farmers’ claims. Well, there is no scam so big that it cannot not be unraveled.

A woke farmer might tell you that only an evil genius could have crafted the biggest money collecting operation in Philippine history, that is, outside of taxation. For how could so much collected money from millions of small farmers for nine years end up in the names of a few? For one, there were no official receipts issued. Saan ang resibo?The coconut levy collected from 1971 to 1982 was supposed to boost coconut research and other programs that would benefit the industry. Alas, the money was diverted into the pockets of Marcos cronies to finance their own business interests.

FEATURED STORIES
OPINION
Education and the state of the Filipino family
OPINION
Go for the ‘big circle’!
OPINION
Retired yet still extremely needy

A 2012 Supreme Court ruling gave the government the ownership of the funds. It also overturned President Benigno Aquino III’s EO for its privatization.

I recently went over my long 1998 interview with coconut farmers that now reads like a primer on how the monumental sin against them was committed. I wrote:

Behold this tree of life. As of last count, there are more than 100 things that could be made from this wonder tree, the coconut. From laundry soap and coconut oil to acoustic boards and medicines, from heady brews and computer parts to culinary delights. And yet, many who live and work in its shadow have suffered penury.

How had they come to this? The very ones from whom money was extracted to fund what was purportedly for their own benefit ended up even poorer, with nary a claim to what was set up in their name.

David’s excoriating exposé gives Eduardo Cojuangco Jr., one of the main actors in the coco levy scheme, some pages to explain what it was and what it was not. And then David goes ahead to list the roles institutions played in the anomaly. “With the United Coconut Planters Bank, Cocofed, and PCA backstopping each other, the monopoly of the industry was a foregone conclusion. With billions of levy money deposited at UCPB at his fingertips courtesy of ‘virtual insider arrangements,’ Cojuangco and his clique could reconfigure the industry and its supply and demand patterns according to their whims, needs, or both. They could likewise bleed it dry, condemning in the process some 20 million small coconut farmers to depths of poverty…”

Wrote Royandoyan: “The path to fund recovery and utilization had always been fraught with danger. Prior to the decisions of the Supreme Court (December 2001) and the Sandiganbayan (2003-2004), the contentious issue confronting coconut farmers, government, legislature and NGO advocates was whether the character (public or private) of the coconut levy funds had to be resolved first by the court before any recovery and utilization of funds can be made by the coconut farmers. Now that the public character of the fund has been established, the contention is over the total recovery of the coconut levy funds through the judicial process as against an out-of-court settlement or compromise.”

After I posted on Facebook the cover of David’s book, former party list representative Patricia Sarenas wrote: “My late father, after working for years in a bank, retired to our small coconut farm. At first, income from copra sales was enough for expenses and for the medical school fees of my sister. Then the copra sales income dropped as he became a victim of the syndicate that milked dry thousands of coconut farmers all over the country…”

How now, carabao? Ferdinand Marcos Jr., who took his oath as President yesterday, besides being Commander in Chief, has designated himself Secretary of Agriculture.

Read Next
America’s boy?
EDITORS' PICK
KWF has no power to ban, censor written works – Lagman
House energy committee chair Arroyo bats for cheap electricity
Why Tagle is a leading papal contender
In Borongan, nuns play hoops (not mahjong)
A laptop that maximizes your WiFi so you can maximize your productivity
Powered by style, innovation and passion
MOST READ
Zubiri on SRA mess: Shameful, disgusting
Why Tagle is a leading papal contender
Arjo Atayde reveals proposal to Maine Mendoza was ‘more than a year’ in the making
SRA officials should resign after ‘illegal sugar order’ – Zubiri
Don't miss out on the latest news and information.