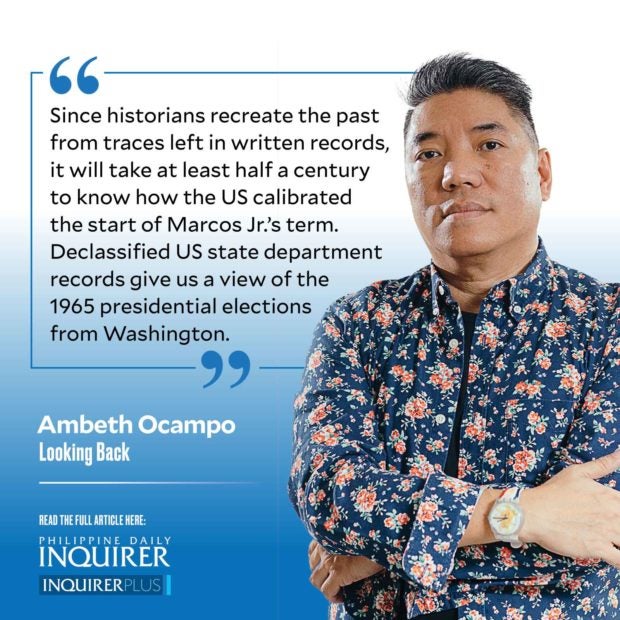 US President Joe Biden may have been the first foreign leader to congratulate Ferdinand Marcos Jr. on his landslide election victory, but the seven-man delegation sent to represent him at the Marcos Jr. inaugural caused speculation on the current state of US-Philippine relations. Biden was represented by Douglas Emhoff, second gentleman of the US, husband of US Vice President Kamala Harris. Sitting US vice presidents were in attendance at three Marcos Sr. inaugurals: Hubert Humphrey represented Lyndon B. Johnson (1965), Spiro Agnew represented Richard Nixon (1969), and George Bush represented Ronald Reagan (1981). The last was particularly memorable for toasting Marcos with the immortal words: “We love your adherence to democratic principles and to the democratic processes.”

Since historians recreate the past from traces left in written records, it will take at least half a century to know how the US calibrated the start of Marcos Jr.’s term. Declassified US state department records give us a view of the 1965 presidential elections from Washington.

Top contenders in the 1965 presidential elections were incumbent President Diosdado Macapagal, Sen. Ferdinand Marcos Sr., and Sen. Raul Manglapus. A month before the elections, the US Central Intelligence Agency (CIA) reported that Marcos Sr., with an estimated 43 percent of the votes, had a slim lead over Macapagal’s 39 percent. Manglapus didn’t have a chance and it was not clear how his votes harmed or helped the leading candidates. A significant admission on the 1965 elections said it was “the first time the Filipinos have conducted an election without the direct and, at least to some extent, steadying influence of United States involvement; they are on their own and they may be expected to indulge in many more manipulatory tactics than in previous elections since 1949.”

The CIA reported that “given past experience, both sides will undoubtedly engage in widespread manipulation tactics, including vote frauds, subversion of election officials, stuffing of ballot boxes, votes lost through managed counting, etc. In addition, both sides will use every other means at their disposal to improve their own position,” adding that incumbent Macapagal had the upper hand in “hanky panky.” In the end, the CIA memo of Oct. 27, 1965 bet on the wrong horse. The post-election analysis of Nov. 26, 1965 said of Ferdinand Marcos Sr:

“Both Macapagal and Marcos prize power, former sometimes appeared inept in its use and unsure what he wished to do with it. Marcos appears to measure it carefully and to be very sure of uses to which he puts it. Up to now, basic objective of his harnessing power has of course been to gain the Presidency.

“… What Marcos really believes in, what his goals are, and how he proposes to go about achieving them, are largely matters of conjecture. To some degree, he has been a guerrilla both in war and during the campaign, placing great emphasis on careful planning, systematic intelligence, secrecy, element of surprise and final massive surfacing of his forces at right time.

“… Marcos has very considerable potentialities, and that coming years will show whether these potentialities will be exerted for high or sinister purposes. Pres. Macapagal recently observed, as earlier reported, that Marcos was brilliant but unscrupulous, but that great responsibility might sober him.

“… Marcos is realist with high awareness of pragmatic and empirical considerations. He weighs and sifts facts carefully, considers numerous angles and acts only after searching consideration and assessment. Once decisions are reached, however, he displays generalship of high order in implementing them.

“… there is some evidence that Marcos is more keenly attuned to needs of country than his critics give him credit for. Woeful conditions throughout nation seem to have had considerable impact on him in his extensive travels in past year. His speeches reflected increasing bitterness, in a manner that seemed to be more than merely campaign oratory, at Macapagal administration’s largely ineffectual attempts to improve people’s welfare. If theory is correct that Marcos has high absorptive capacity and is greatly influenced by things he is exposed to, then his nationwide observations may serve valuable purpose. “

In between, the promise of his first term in 1965 to the time he fled Malacañang in 1986, do US state department documents paint Marcos Sr. as “America’s Boy”?