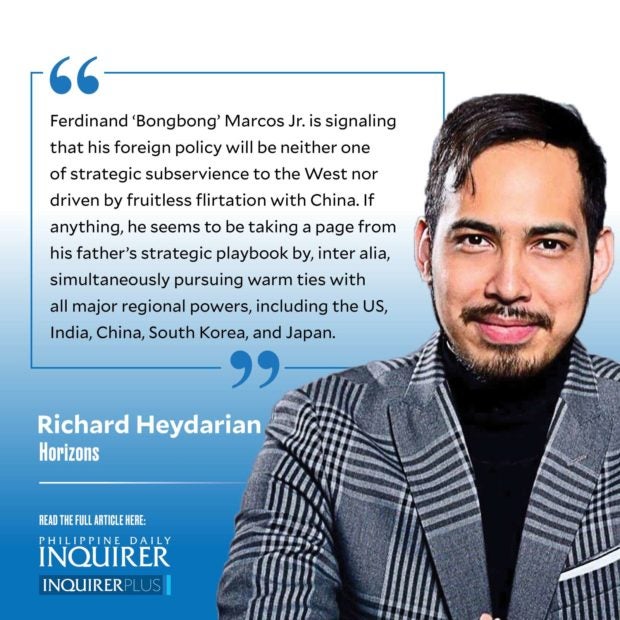 “American occupation of the Philippines was the highest blessing that ever befell the Filipinos similar in a way to the advent of Spain,” declared Elpidio Quirino, during his Rizal Day speech in 1947. Years earlier, our first postwar president Manuel Roxas was equally effusive about our former colonizers. Amid growing social awareness of colonial injustices, he described America as “our mother, our protector, our liberator and now our benefactor” and reassured Washington that “[o]ur feeling toward America is not represented by the loud complaints of an articulate few in our midst.”

The words of our former presidents are particularly shocking since the Philippines is the home to Asia’s first anticolonial revolt. It also came on the heels of Manuel Quezon’s years-long quest to end American colonization; in fact, the Commonwealth-era president was so committed to our independence that, perhaps in a moment of exalted frustration, he declared, “I would rather have a government run like hell by Filipinos than a government run like heaven by Americans.”

Former senator Claro M. Recto had a term for our long tradition of strategic subservience to former colonizers: a “mendicant” foreign policy. In a particularly eloquent speech before the Nacionalista Party, Recto lamented how, “the weaklings, the sycophants, and the mendicants, who, to extricate the nation from misery they have brought about, have surrendered [the] political sovereignty and economic independence [of the Philippines to] exploiters and oppressors.”

Benigno Aquino Jr. another fiery senator of his era, was equally distraught. In a heartfelt essay for the Foreign Affairs magazine, he lamented how “Filipinos are bewildered about their identity.” Aquino fretted at how Filipinos ended up as “Asian people not Asian in the eyes of their fellow Asians and not Western in the eyes of the West.”

FEATURED STORIES
OPINION
Education and the state of the Filipino family
OPINION
Go for the ‘big circle’!
OPINION
‘Maid in Malacañang’: A biased review

In short, we were not only overly dependent on a former colonizer, effectively outsourcing our national security to Washington, but also struggled with fundamental identity issues decades into our formal independence. Half a century later, as America’s imperial power peaked, longtime provincial mayor Rodrigo Duterte tried to transform the Philippines’ strategic culture by consciously embracing an “independent” foreign policy.

Yet, his brazenly pro-Beijing predilections, combined with personal resentments toward the West, ended up weakening our traditional alliances without necessarily strengthening our position in the West Philippine Sea. A geopolitical novice, Mr. Duterte easily fell for China’s “pledge trap,” namely all those unfulfilled pledges of big ticket infrastructure investments. For some, the populist president was simply changing one strategic patron for the other.

If there is one Filipino president who came closest to achieving a semblance of strategic “independence” for the Philippines, it was no less than former dictator Ferdinand Marcos Sr. To be clear, his regime was deeply corrupt and brutal, overseeing a destructive war in Mindanao. And his economic policies ended up catastrophically for the whole nation.

Yet, Marcos’ foreign policy closely resembled what political scientists describe as “subaltern realism,” whereby weaker postcolonial nations can maximize their strategic room for maneuver by adopting robust and interlocking ties with rival powers for the purpose of national development. While maintaining a strong military alliance with Washington, Marcos also pursued economic relations with the Soviet Union and was also among the first US allies to normalize diplomatic ties with Maoist China. Not to mention, Marcos also oversaw the Philippines’ proactive occupation of disputed land features in the West Philippine Sea, including the establishment of an airstrip on Pag-asa Island.

Just weeks following his election victory, Ferdinand “Bongbong” Marcos Jr. is signaling that his foreign policy will be neither one of strategic subservience to the West nor driven by fruitless flirtation with China. If anything, he seems to be taking a page from his father’s strategic playbook by, inter alia, simultaneously pursuing warm ties with all major regional powers, including the US, India, China, South Korea, and Japan.

In fact, his appointment of Dr. Clarita Carlos, who is deeply familiar with the strategic culture and foreign policy bureaucracy of the Marcos era, as his national security adviser is quite telling. If we want to be respected as a truly independent nation, we need to dispense with both a “mendicant” strategic mindset as well as “amateur hour” antics in our foreign policy. Let’s see what the Marcos Jr. administration has to offer once in office.

Marcosnomics: The ‘best and brightest’ Cabinet?

Can Marcos Jr. ‘unify’ the Philippines?