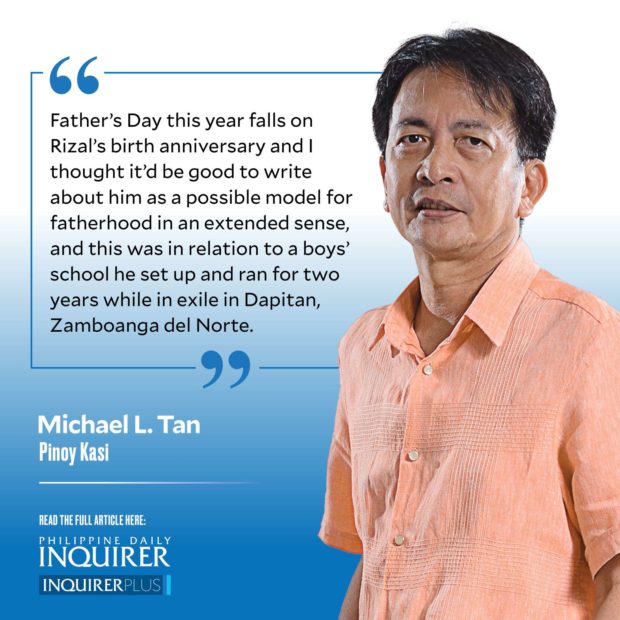 There’s a gossipy side to history which, unfortunately, interests the public more than the more scholarly, facts-based aspects of historiography. Enter social media, which favors the spread of the more sensational and salacious gossip, and you have it quickly accepted as history.

This is particularly the case when it comes to gossip around parenthood, and Jose Rizal seems to be a favorite among the chismis-as-history circuit, with history teachers scratching their heads trying to counter stories that Rizal fathered, among others, Adolf Hitler, Mao Zedong, and a daughter Yuriko with a Japanese woman. Look up “Did Jose Rizal have a son (or children)?” for a fairly balanced article refuting these rumors.

Rizal’s alleged multiple paternities come out of the way historians have associated him with several women, suggesting he had a woman in several countries he visited. He never married, which makes people want to think he was a palikero (womanizer) and, by extension, sowing wild oats. He did have a son, more on this later.

Father’s Day this year falls on Rizal’s birth anniversary and I thought it’d be good to write about him as a possible model for fatherhood in an extended sense, and this was in relation to a boys’ school he set up and ran for two years while in exile in Dapitan, Zamboanga del Norte.

A document, “Prospectus of Colegio Moderno,” describes that the school was put up “to form and educate young men of good family and means in accordance with the demands of modern times and circumstances.” Yes, a finishing school in the middle of the hinterlands of Zamboanga.

The students’ day started at six every morning with Swedish gymnastics, then a long day of study periods and classes (two hours in the morning, two in the afternoon) with lots of sports and recreation in between, meals and tea (so European). Bedtime was 9:30 p.m.

Home schools should look to Rizal’s school as a model!

At one time he had as many as 28 students, aged 12 to 16, all boarders. Most of them were from Mindanao but a few were from Luzon as well, including some nephews. The students came to be known as “chicos de Rizal,” Rizal’s young boys. He seemed to be the only teacher, assisted by a “prefect of boarding students,” watchers, a wardrobe keeper, and a nurse. The prospectus says the prefect’s role could be assumed by the director (Rizal), so you can imagine he pretty much had to be a father to all.

His teaching methods were likely creative. One story from his students is that he would send new boarders out into the forest to retrieve an item Rizal supposedly left behind. Out in the forest, the student — sent out alone — would hear all kinds of hoots and calls. Upon his return back to the school, he would be told the strange sounds of the forests actually came from his own classmates. More than an initiation ritual, it was supposed to instill courage. I suspect, too, that Rizal the scientist wanted his young wards to develop reason and overcome irrational fears.

Dark clouds were building up through the years as he ran the school. He was living in with Josephine Bracken and had tried to marry her and at that time the only way he could do that was in church. But the priests would not let him, because of his alleged heretical ideas. Bracken became pregnant and delivered a premature stillborn, said to be named Francisco (Pedro in other accounts).

Rizal buried his stillborn son in an unmarked grave.

In July 1896, he had to close the school and left Dapitan with Josephine and several companions, including three nephews and six of his chicos from his school. He was supposed to go to Cuba to serve as a physician and reached Barcelona, where he was ordered back to the Philippines to be tried on charges of “rebellion, sedition, and conspiracy.” He was found guilty and executed on Dec. 30, 1896. At least one of his students witnessed his teacher’s execution in Bagumbayan, now Luneta.

When a parent has cancer