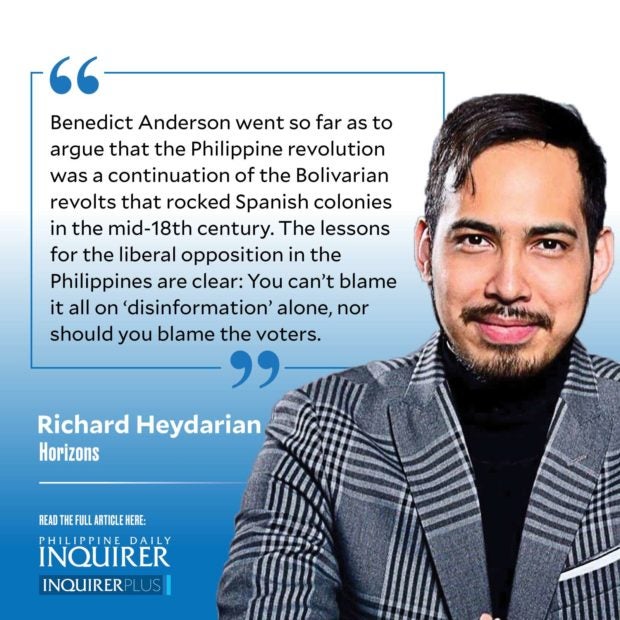 Election Day was likely my busiest day since the 2016 elections. That fateful day began at 7 a.m. for my first interview with international media and ended at 5 a.m. the following day, as I practically toured local television studios round the clock and accommodated whatever online interviews I could squeeze in.

Naturally, threw a few hours of polyphasic naps in between so that I could keep a semblance of coherence on the screen. The rest of the week, meanwhile, was dedicated to explaining the election outcome to the world, which simply wondered: “You elected another Marcos!?”

What I found even more challenging in the succeeding weeks, however, was explaining the election result to the countless despondent folks across various demographics. Many sincerely believed that Vice President Leonor “Leni” Robredo could pull off an 11th-hour victory.

One thing that I found particularly frustrating was the torrent of denialism among some opposition supporters, who vaguely blamed it all on “disinformation,” if not directly the voters themselves. Many expressed their wish to migrate, while others dismissed the results altogether as pure “fraud.”

So, I ended up more like a group therapist rather than a political analyst. And yes, absorbing all that agony and grief brought its own sleepless nights. The good news, however, is that proper political understanding, anchored in comparative analysis, is not only therapeutic but also potentially transformative.

And this brings me to Latin America, a region that shares many of our social ills, as well as lofty aspirations. Over the past two decades, the region has produced, against all odds, a wave of progressive-charismatic leaders, who collectively belong to the so-called “Pink Tide.”

In the past year, voters in both Peru (Pedro Castillo) and Chile (Gabriel Boric) voted for former activists, who managed to defeat either the scions (Keiko Fujimori) or partisans (José Antonio Kast) of former dictators.

Most recently, Gustavo Petro, a former guerilla fighter, dominated the first round of presidential elections in Colombia with more than 40 percent of the votes, comfortably beating traditional politicians, such as Federico Gutiérrez. In Brazil, former president Luiz Inácio Lula da Silva, a longtime labor union leader, is a favorite to beat the incumbent far-right populist, Jair Bolsonaro, in elections this year.

And, yes, disinformation is a big problem in Latin America too.

According to the 2017 Ipsos Perils of Perception report, which measures levels of public misinformation about key social issues, the Philippines ranked between Peru and Brazil at the bottom, with Mexico and Colombia not too far away. Meanwhile, the only country that ranked lower than the Philippines in the 2018 Programme for International Student Assessment’s mathematics and science category is actually Latin America.

In many ways, we are collectively more similar to Latin America and other former Spanish colonies than neighboring Asian states. As writer Anthony Ocampo put it, we are “Latinos of Asia.” In fact, Benedict Anderson went so far as to argue that the Philippine revolution was a continuation of the Bolivarian revolts that rocked Spanish colonies in the mid-18th century. The lessons for the liberal opposition in the Philippines are clear: You can’t blame it all on “disinformation” alone, nor should you blame the voters.

These charismatic leaders, to use the words of Mouffe, displayed true leadership by effectively mobilizing popular “passions toward promotion of democratic designs,” and kept “democratic contestation alive” by sustained and full-scale mobilization of the civil society beyond election cycles alone. None of them settled for half-hearted reforms or tired liberal clichés. They succeeded because they offered nothing short of transformational reform in a broken political system.

Marcosnomics: The ‘best and brightest’ Cabinet?

Can Marcos Jr. ‘unify’ the Philippines?

Leni and the future of the Pink Movement