Leni and the future of the Pink Movement 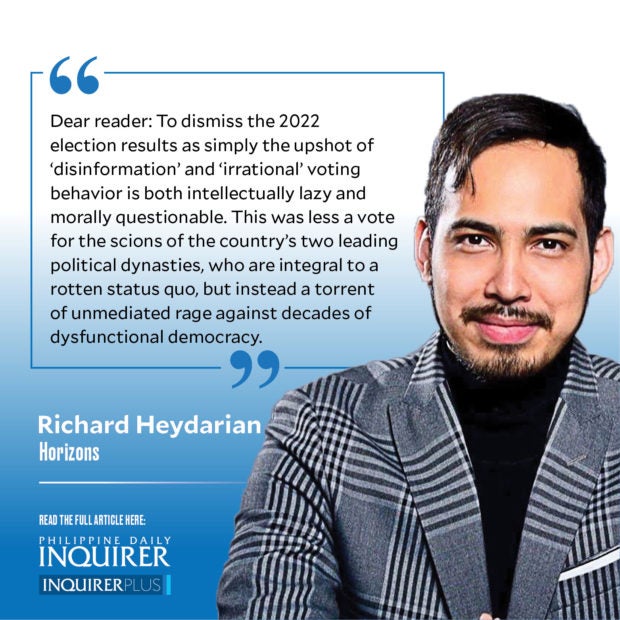 “You never really understand a person until you consider things from his point of view,” advised Atticus, the main hero of the tragic novel “To Kill a Mockingbird.” He gently advised his attentive children, Jean and Jem to seek genuine compassion by trying to “climb into [someone’s] skin and walk around in it.”

On the final day of campaign, the miting de avance, I decided to do something that never crossed my mind in the past. With an international media appointment in Makati that day, observing the Pink Movement’s final hurrah for presidential candidate Ma. Leonor “Leni” Robredo was a no-brainer.

Throughout the afternoon, as words bled onto my keyboard ahead of my interview, I couldn’t help but notice a torrent of pink washing over Ayala Avenue, gradually turning the business district into the beating heart of democratic struggle. Folks of all ages, but mostly from middle-to-upper class backgrounds, seamlessly claimed the gorgeous streets and posh shopping areas as their own — eagerly partaking in a clear show of force by the nation’s beleaguered liberal-progressive forces.

Following Robredo’s speech that evening, as smoldering daylight succumbed to the gentle breeze of summer nights, I decided to immediately head to the other major miting de avance. After navigating impossible traffic and anxiously wondering if I have missed the boat, the “UniTeam” rally dawned upon our dark horizons.

Apparently, I was actually early for the penultimate speeches by the administration bets, who spared no fireworks to celebrate their impending victory. And it was here amid an undulating crowd of mostly working-class folks, clad in their humble attires or “UniTeam” shirts, where a whole different world opened before my eyes.

Hailing from the country’s northern city of Baguio, the nostalgic zeitgeist was no stranger to me. I have been drenched in revisionist discourse since childhood, thanks to distant relatives singing praises of the former overlords of this tragically misruled nation.

Largely thanks to my sensible parents, who helped me separate obvious fact from mind-boggling fiction, I didn’t have to wait until my days in Diliman to know the horrors of an inimitably tragic past.

What I found particularly overwhelming, however, was the sheer desperation of our common folks, the dominant demographic on the grounds, who struggled to hold back tears amid the whole nostalgic jazz that enveloped the miting de avance in Solaire. At once, you could sense folks’ surreal yearning for historic redemption and overnight transformation in as much as their “ressentiment” against decades of unfulfilled promises by democratically elected leaders.

Dear reader: To dismiss the 2022 election results as simply the upshot of “disinformation” and “irrational” voting behavior is both intellectually lazy and morally questionable. This was less a vote for the scions of the country’s two leading political dynasties, who are integral to a rotten status quo, but instead a torrent of unmediated rage against decades of dysfunctional democracy.

Here are the brutal facts: Our “democracy” is one where more than 80 percent of elected legislative offices have been hijacked by a narrow elite, while the country’s 40 richest business families swallowed up to 76 percent of newly created growth in the early 2010s.

According to a 2020 Pew Research Center survey, almost half of Filipino respondents said “most elected officials do not care” about ordinary folks, while an earlier authoritative survey (also by Pew) showed that only 15 percent of Filipinos are fully committed to liberal democratic politics based on institutional checks and balances. “Democratic ambivalence” is the lay of the land. No wonder then, not only the masses but also the majority of middle-class Filipinos have voted for illiberal forces, who skillfully presented themselves as “decisive” alternatives to supine liberalism.

Leni, who increased her number of votes from 2016 and got more than 50 percent votes than the chief liberal candidate in 2016, as well as the broader Pink Movement, an energetic toddler with vast potential, have a bright future — if they humbly appreciate and properly channel the widespread yearning for transformative change among the vast majority of Filipinos.

Our folks have had enough of half-baked reforms and half-hearted liberal slogans. They want decisive leadership. Fiery progressives such as Risa Hontiveros, who managed to win re-election in an impossibly tough race, perhaps show the way forward for the Pink Movement.