A narrowing window for democracy? 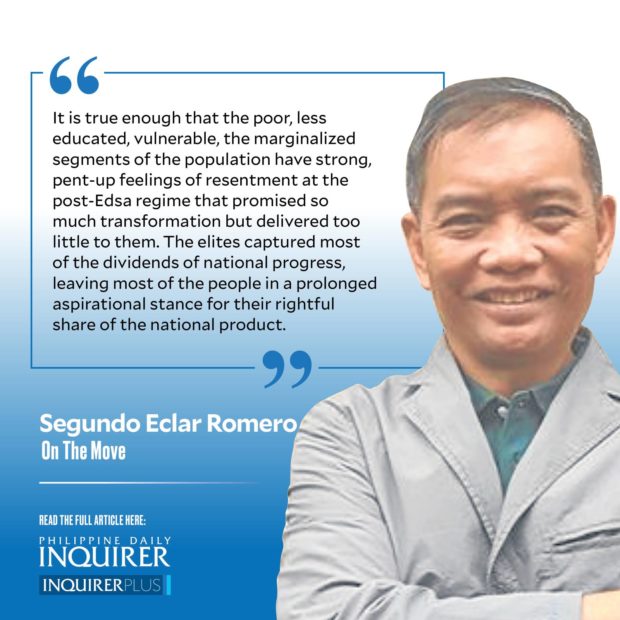 Department of Health spokesperson Undersecretary Maria Rosario Vergeire says that it is not the proper time to lift the state of calamity due to COVID-19, and that is that. Spoken with authority, putting to sleep various proposals that argue it is time to declare the COVID-19 emergency over.

It is at these times that we realize the value of career civil servants who exude professional confidence and competence in the way they go about their routine work. They appear reassuring and respectable compared to civil servants who have risen to their level of incompetence, becoming modern-day minotaurs — half-technocrats and half-politicians.

In the same breath, we cite the contribution of Dr. Guido David — the face of OCTA on mainstream and social media who, being a nongovernment data analysis specialist, gave the public the sense of depth and validation of government data that comes from an autonomous triangulating source.

It is here that we get an appreciation of a different type of “dynasty” — the academic or intellectual dynasties, an insufficiently heralded Filipino tradition. Who is Guido David to declare the COVID-19 situation, the ordinary Filipino might ask? The doctorate in mathematics under his belt, of course, is only a basic signal. But weightier to me was to know that he is the son of the well-respected Dr. Fredegusto David, my former faculty colleague at the College of Arts and Sciences at the University of the Philippines.

There are legions of others, the Mahar Lagmays, the CP Davids, the Leloy Claudios, emerging from university towns all over the country, imbued with the passion of patriotism that seemed so abundant in the past but now seems so difficult to nudge in the right direction.

Lately, I have grasped for confident experiential familiarity with what I know about the Philippines and its key institutional nurseries of patriotism I have been associated with in my 50-year career. I feel uncomfortable being “OK” with the surge and pervasiveness of varnished truths and blatant lies that have swirled in Philippine cyberspace and have now gelled into the “voice of the people.”

It is true enough that the poor, less educated, vulnerable, the marginalized segments of the population have strong, pent-up feelings of resentment at the post-Edsa regime that promised so much transformation but delivered too little to them. The elites captured most of the dividends of national progress, leaving most of the people in a prolonged aspirational stance for their rightful share of the national product. Indeed, shame on the post-Edsa elites, despite an elite segment heroically trying to shift directions but have failed to impress the masses.

Nevertheless, it is not clear to me that the numerical results of the elections put to rest the various concerns about the soundness of the Philippine electoral system in the light of the massive vote-buying, misuse and abuse of social media, and the failure of institutions to promptly decide on the challenges to the qualification of candidates and properly steward the electoral process.

Where do we go from here? The fait accompli of the electoral results in the Philippines has been like a switch, dissipating feelings of loss in the election, taking comfort in the “reality” that the people have spoken. But what about the feelings of victimization, of the deceit that was foisted not in the recording and counting of votes but in the way votes had been purchased wholesale or procured through false pretenses and elegant lies couched in golden illusions?

The American author Jason Stanley warns that “America is now in fascism’s legal phase.” This refers to how legal action is being taken in various states ostensibly to ensure future electoral integrity but actually to advance the fascist agenda — Make America Great Again — that will, among others, ensure the return of Donald Trump to the US presidency.

Similar moves to consolidate the strands of populism and fascism in the post-election period may not be far off in the Philippines. The window for timely eternal vigilance is now, not before the midterm elections in 2025. Already, the electoral trends of 2016, 2019, and 2022 have critically narrowed the window for democracy.

MORE ‘ON THE MOVE’ COLUMNS

Choosing a Cabinet: ‘Langis at tubig’?

A new life for Angat Buhay