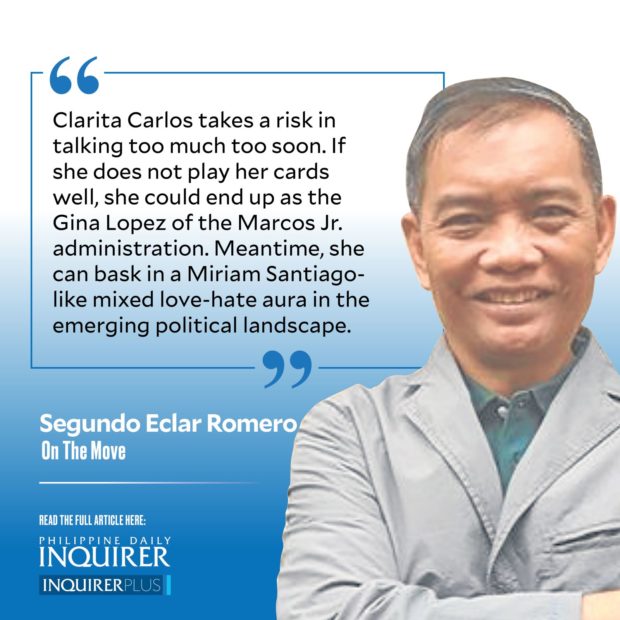 Incoming President Ferdinand Marcos Jr. has asked retired professor Clarita R. Carlos to be his national security adviser (NSA), and she has accepted. Carlos caught the attention and admiration of hundreds of thousands of Marcos Jr. supporters when she was perceived to have given him an intellectual profile-raising opening in the only presidential debate forum he attended. In the debate, Carlos asked Marcos Jr. if he had a “Machiavellian” leadership style. Marcos gave a spontaneous and articulate burst of ideas about how he would do what needs to be done as required by a situation, guided by a full understanding of the total context and the people involved, etc.

As sound bites go, it was an excellent recitation, and apparently, Carlos was pleased with the answer. She smilingly invited Marcos Jr. to the University of the Philippines campus sometime, so they could discuss her operational code constructs — the focus of her Ph.D. dissertation. His supporters must have heaved a sigh of relief as Carlos, of the intimidating reputation, could embarrass Marcos Jr. big time. Quickly thereafter, the Carlos legend as a champion of Marcos Jr. skyrocketed. Myriad Marcos Jr. supporters smarting from perceived scorn and insults by the creative, entrepreneurial, professional, and economic elites, flocked to Carlos’ Facebook page seeking the protection of her acerbic tongue on social media.

But Carlos is already forcing many people to check their preconceived notions about her and how she will do her job. That she is the first woman and only the third civilian to hold that position since 1986 already augurs that the NSA role will be performed in radical ways. Carlos brings to her post an academic background and irascible attitude that will create waves in the national security and foreign policy establishment.

Give Carlos the power and authority to shake things up and she will. She was never a chairman of the Department of Political Science nor a dean in UP, but she was plucked out of the academe to become president of the National Defense College of the Philippines (NDCP) in 1999. At the NDCP, Carlos immediately saw the weaknesses of its organizational architecture. It was a Department of National Defense bureau on the same level as the Armed Forces of the Philippines (AFP), but it only had the narrow function of a graduate school to graduate 40 or so military officers, government officials, and captains of industry per year on a budget of P40 million in 1999. In no time, Carlos decided to do the impossible: run two simultaneous batches of 40 students each, effectively reducing the per capita cost of educating a Master in National Security Administration (MNSA) graduate from P1 million to 0.5 million. She looked at the MNSA curriculum and immediately saw its gaping hole. National security was conceived to have political, military, sociocultural, economic, and techno-scientific dimensions. She asked, where is the environmental dimension? And so a new module materialized.

So, when Carlos drops ideas like “Red-tagging is lazy thinking,” “enough of peace talks with the insurgents,” and “national security should be defined in terms of human security,” these policy postures are deeply ingrained frameworks in Carlos’ mind, a product of countless multiagency and multistakeholder policy analyses and advocacy processes undertaken within and outside the NDCP.

Ironically, these policy positions are comforting to the opposition and alarming to the political operators in the Marcos Jr. camp who may need to stoke fear and hate as tools for regime protection and promotion by keeping the opposition in disarray and running for cover.

Carlos takes a risk in talking too much too soon. If she does not play her cards well, she could end up as the Gina Lopez of the Marcos Jr. administration. Meantime, she can bask in a Miriam Santiago-like mixed love-hate aura in the emerging political landscape.

MORE ‘ON THE MOVE’ COLUMNS

A narrowing window for democracy?

Choosing a Cabinet: ‘Langis at tubig’?

TAGS: Clarita Carlos, On The Move