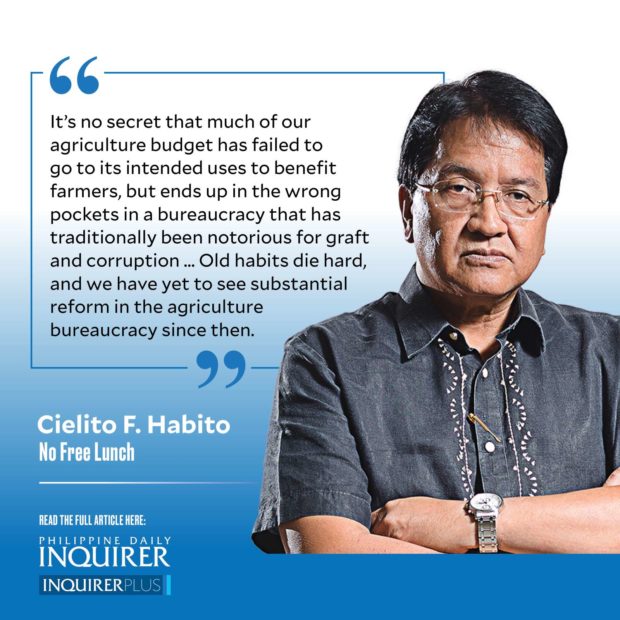 I’ve long asserted that agriculture is far too important to be left to the Department of Agriculture (DA) alone. Our farm and fisheries sector is the concern of every Filipino, because on it hinges our ability to feed our people, while also providing important products other than food. Last week, I suggested that getting back to the two basics — our people and our land — should be top priority in planning the nation’s way forward. Having discussed the first, especially in terms of addressing our serious education crisis, I now turn to our land, particularly in maximizing the value and benefits we get from our farms, and coastal and inland waters.

Of the three major economic sectors, agriculture is the most evenly spread across the country’s regions. In stark contrast, Metro Manila and Calabarzon alone already account for more than half of our services gross domestic product, while for our industry GDP, more than half comes just from Calabarzon, Metro Manila, and Central Luzon. Agriculture is truly our most inclusive economic sector, and our best bet to achieving inclusive economic development.

That the incoming president has been taking his time to name his agriculture secretary suggests that he sees the success of his presidency hinging crucially on the sector’s performance. A reliable source tells me that he would like to see a thorough overhaul and restructuring of the agriculture bureaucracy if Philippine agriculture were to stop lagging far behind those of our neighbors, whose agriculture experts we once mentored. He, thus, needs an agriculture secretary who can effectively preside over such a major house cleaning and renovation. Having studied the sector for decades, I had concluded long ago that what Philippine agriculture most critically needs is fundamental bureaucratic and institutional reform, without which it would simply continue being the drag on our overall economic progress.

It’s not a problem of lack of knowledge or technology to raise productivity; we’ve long had that in the University of the Philippines Los Baños and our other agricultural knowledge centers, where we’ve even taught our neighbors since the 1960s. Rather, it’s our persistent inability to have our farmers properly and widely apply and benefit from that knowledge in farms all over the country, because of what I’d call the “seven deadly sins” of our DA. The DA (1) persisted with a largely top-down centralized approach to managing the sector, in spite of the devolution mandated by the Local Government Code of 1991; (2) was unduly obsessed with rice self-sufficiency, to the relative neglect of other crops, both in terms of attention and budgets; (3) inordinately focused on farm production and neglected the rest of the agricultural value chain for a holistic systems perspective; (4) was largely structured and organized according to commodities rather than according to key central functions it must fulfill under the mandated devolved setup; (5) relied primarily on protecting our farmers by closing our domestic markets to foreign competition, to the neglect of nurturing them to shape up so they can well compete and thrive in both our internal and export markets; (6) failed to respond to the fragmentation of our farms from agrarian reform and generational partition, via effective consolidation and clustering schemes that our neighbors had used to good advantage; and (7) neglected to work with public and private financial institutions to ensure farmers ample access to working capital, so they could maximize use of superior technologies and inputs, profit from improved productivity, and thereby raise their families’ incomes and welfare.

Furthermore, it’s no secret that much of our agriculture budget has failed to go to its intended uses to benefit farmers, but ends up in the wrong pockets in a bureaucracy that has traditionally been notorious for graft and corruption. I’ve written about suggested solutions to all these “sins” over the last 20 years. But old habits die hard, and we have yet to see substantial reform in the agriculture bureaucracy since then. Meanwhile, Filipino farmers and food consumers continue to suffer from it.