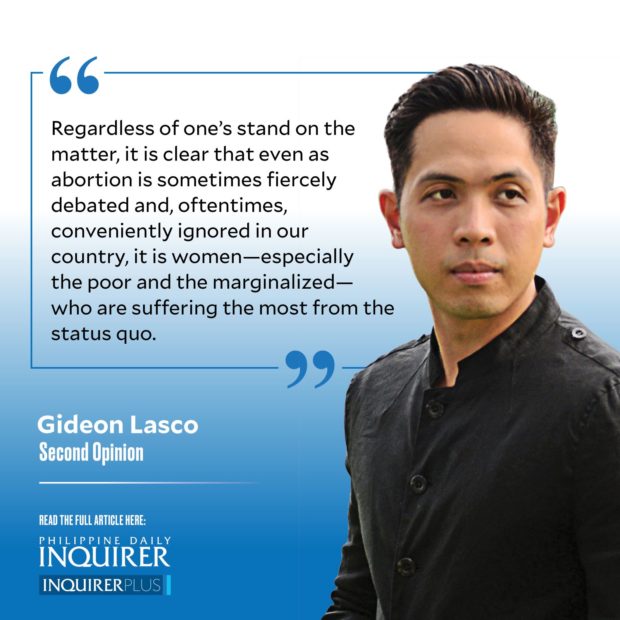 We hardly talked about abortion when I was in medical school, but its reality could not be denied in our OB-GYN rotation, when women came to the emergency room, distraught and pale, with the complications of unsafe abortion practices, leading them to sepsis and, oftentimes, death. Alas, I have seen how these women rarely received an iota of sympathy, not even from physicians themselves.

I would learn more about these “unsafe abortion practices” in medical anthropology, where our professor and my eventual mentor, Michael Tan, would always include abortifacients in his discussion of “Quiapo Medical Center” or the range of substances that one can buy in Quiapo, right in front of the church, reflective of our syncretic medical culture. The fact that abortifacients are euphemistically called “pampa-regla” speaks of their being taboo, but the mere fact that they exist speaks of the popular demand for them. Over the years, Professor Tan and I have followed how these abortifacients have gone online; even today, one can easily find Facebook pages that offer them.

All of the above point to abortion as a common practice in the Philippines, with a technical report by the University of the Philippines Population Institute estimating that in 2020 alone, there were over 1.2 million abortions in the country. The same report adds that the COVID-19 pandemic has significantly contributed to this burden, estimating 200,000 additional abortions for every 12 months of the pandemic, owing to various factors including unwanted and/or underage pregnancies.

This is not a new phenomenon: A study conducted in Laguna during the late 1960s showed that 30 percent of women had had at least one abortion in their reproductive history, and a 1975 study in Cavite showed a rate of 17 percent (Flavier and Chen, 1980). If we go even farther back in history, we have accounts of abortion during precolonial times, reminding us of the cultural contingency of societal conceptions of life. Anthropologists also remind us that while Catholic doctrine views human life as beginning at conception, local notions of personhood are “processual” (Bulloch, 2016; see also Tan, 2008).

Despite its age-old popularity, abortion has been considered a crime in the Philippines for over a century, and it continues to be shunned in public and policy reform discourse. The Philippine Constitution itself is invoked by those who support a total abortion ban, citing its call for the protection of “the life of the unborn from conception.” Perhaps more significantly, the Revised Penal Code makes no exceptions; doctors and midwives who perform abortions can be jailed for up to six years and the women themselves for two to six years.

As is to be expected, the result is not that people stopped abortion—but that it has been unsafe and dangerous, whether in underground clinics or people resorting to anything from pills to catheters and other “barbaric” methods. In fact, global surveys suggest that the rates of abortion in various countries are similar regardless of legality.

There are no two sides in the abortion debate, but a spectrum. Some aver that pregnancy is a gift from God; it is a blessing regardless of the circumstances and, in any case, life begins at conception, which is why abortion is tantamount to murder. Others are opposed to the idea of abortion in general but are open to allowing it in certain cases, like rape, incest, or for medical reasons. Finally, there are those who favor full abortion rights, citing it is a matter of choice and that the state should not interfere.

It must be emphasized that proponents of “decriminalization” and “safe abortion” may fall within any part of this spectrum; they may not be endorsing abortion itself, only that women should not be punished for doing so—nor should they have to risk dying in the process. Likewise, most of those advocating for the above may likewise be also advocating for better economic opportunities, concerted efforts to prevent rape, as well as access to birth control and reproductive health services, so that women will not have to resort to abortion in the first place.

Regardless of one’s stand on the matter, it is clear that even as abortion is sometimes fiercely debated and, oftentimes, conveniently ignored in our country, it is women—especially the poor and the marginalized—who are suffering the most from the status quo.