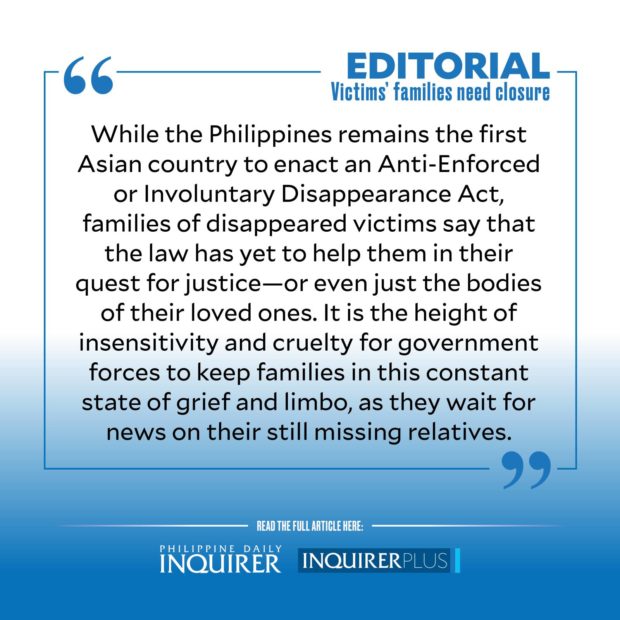 With the Court of Appeals (CA) upholding the conviction of retired general Jovito Palparan and two Army officers for the 2006 kidnapping and disappearance of two student activists, it is fair to say that justice has been served a second time.

On Sept. 18, 2018, the Malolos Regional Trial Court convicted Palparan and his coaccused, Lt. Col. Felipe Anotado and Staff Sgt. Edgardo Osorio, of the kidnapping and serious illegal detention of University of the Philippines students Karen Empeño and Sherlyn Cadapan.

While affirming the lower court’s previous sentence of reclusion perpetua or up to 40 years in prison for the three men, the CA also modified the penalty to reflect the seriousness of the crime. After “considering the aggravating circumstances” of the kidnapping, the CA ruled that “the penalty must be reclusion perpetua without eligibility for parole.” The court also added a 6 percent interest per year until fully paid to the P100,000 in civil indemnity and P200,000 in moral damages that the three convicts were ordered to pay the families of the victims.

In their appeal, Palparan and his coaccused questioned the testimonies against them, but the CA found the accounts of witnesses Raymond Manalo and Wilfredo Ramos Jr., to be “credible, clear and categorical.”

Both witnesses, who were also kidnapped and detained on suspicions of being communist rebels, testified seeing Cadapan and Empeño inside a military cell, and said they saw military men torture and sexually molest the two students who were then 29 and 22 years old, respectively.

The victims were seized in 2006 by gunmen from their rented house in Hagonoy town, Bulacan province. Empeño was then a sociology student doing research on the plight of Bulacan farmers, while Cadapan was a human kinetics student and community organizer for a farmers’ group, and was reportedly two months pregnant when abducted. They have yet to be found.

Dubbed “The Butcher” by rights activists for the ruthless killings that followed his trail, Palparan went into hiding for three years after being charged in 2011 with torture and rape, serious physical injuries, arbitrary detention, maltreatment of prisoners, grave threats, and coercion by the mothers of his victims. He was finally found and arrested in 2014 and was last in the news for an unauthorized interview in March over SMNI, the media outfit owned by controversial Pastor Apollo Quiboloy, who is on the Most Wanted list of the Federal Bureau of Investigation for alleged human trafficking activities.

Though Palparan and his coaccused can still appeal their conviction with the Supreme Court, the CA ruling has been hailed as a “rare victory” for justice and accountability in a country afflicted with a culture of impunity.

Still, a gray cloud hovers over this heartening development. With the two women still missing, will their families ever find closure? It’s been 16 years since these students disappeared, and there has been no information on what happened to them and where they, or their bodies, are. For the families, the best they can hope for is that their kin may be languishing in a dank cell somewhere and might yet find their way home. But more likely, the grim question they keep pushing away is: Have their captors finished them off to dispose of evidence that state-sponsored killings happen as a default response to vocal critics and militants?

The question has been asked often enough, but remains unanswered in previous cases of individuals similarly disappeared by state forces. There’s the case of farmer-activist Jonas Burgos who was abducted in a Quezon City mall on April 28, 2007, by four armed men and a woman. Despite protest rallies on his behalf, media petitions, and international attention, his body has not been found.

While the Philippines remains the first Asian country to enact an Anti-Enforced or Involuntary Disappearance Act, families of disappeared victims say that the law has yet to help them in their quest for justice—or even just the bodies of their loved ones. It is the height of insensitivity and cruelty for government forces to keep families in this constant state of grief and limbo, as they wait for news on their still missing relatives. After so many years of oppressive silence, their only wish now is to give their kin—or their remains—a decent burial.

With the CA ruling striking off the possibility of parole and stoking hopes that The Butcher will spend the rest of his days behind bars, will other witnesses now find the courage to surface and reveal what they know of the women’s fate? While justice has been served, it should come with closure as well to ease the anxiety of the grieving families and enable them to lay this grim chapter to rest, so they can finally move on with their lives.