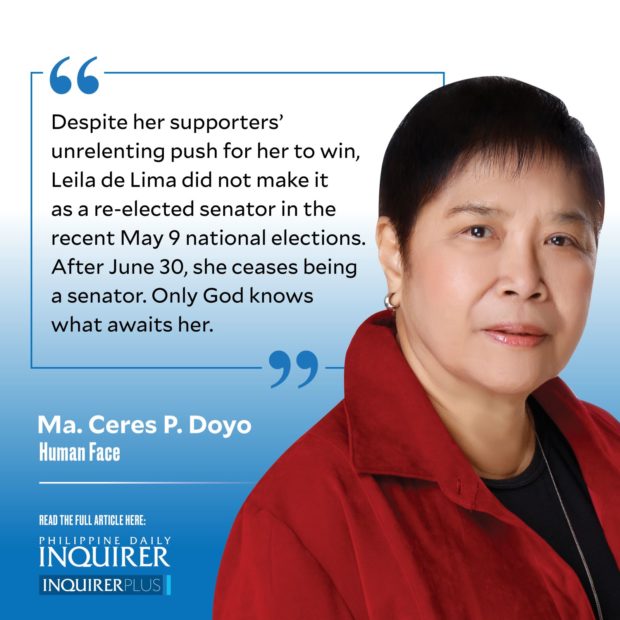 More than a year ago, when Sen. Leila de Lima was completing her fourth year in solitary confinement at the Camp Crame detention facility, I serialized in four parts my Q&A with her.

There seemed to be no break in the clouds then, as the powers that be that willed her incarceration on alleged trumped up charges (without bail) was a boulder that could not be moved.

Now, in her fifth year in detention, six prosecution witnesses have withdrawn/recanted/reversed their accusations in succession, like domino tiles falling one after another. Previous to these withdrawals, one of three charges against De Lima has been dropped by the court. But the senator, a fierce critic of President Duterte’s drug war, continues to languish in jail with the Department of Justice (DOJ) saying that all these recantations will have to pass through a judicial process.

Despite her supporters’ unrelenting push for her to win, De Lima did not make it as a re-elected senator in the recent May 9 national elections. After June 30, she ceases being a senator. Only God knows what awaits her.

I reviewed my Q&A with the senator, and these are what she said about the cases against her:

“I’m facing three cases of conspiracy to commit illegal drug trading before the Muntinlupa Regional Trial Court. Criminal Case Nos. 17-165 and 17-166 are being heard at Branch 205, with the Prosecution having concluded their presentation of evidence. Criminal Case No. 17-167, meanwhile, is being handled by Branch 256…”

According to De Lima at that time, the following case developments served to prove her innocence:

There is no corpus delicti or body of the crime, meaning, the kind or volume of alleged drugs that is a basic premise for any drug case was never identified;

There is no money or paper trail linking her to any illegal drug transactions;

There is no conspiracy because, in the first place, no one has admitted to being a co-conspirator who has personal knowledge of illegal drug transactions, let alone to dealing with her personally;

There is no drug case; instead, what became apparent was (a) a kidnap-for-ransom case involving crooked cops who extorted money from a Bilibid Prison convict whose niece they kidnapped, and (b) a bribery case involving Bureau of Corrections officials who took money from convicts in exchange for certain favors—neither of which had anything to do with illegal drugs;

There is no credible testimony from witnesses who are mostly Bilibid inmates—their accounts were mere hearsay, riddled with inconsistencies and without any proof.

Last June 5, the Inquirer had for its banner headline “DOJ to reassess evidence vs De Lima” with the accompanying blurb: “Justice Secretary Menardo Guevarra says it will take ‘a few days’ for prosecutors who will review the cases of detained Sen. Leila de Lima to determine the strength of the overall evidence against her. They will remain on course to try to convict her on the drug charges if the recent recantations of key witnesses will not affect the two remaining cases against her.”

It’s been “a few days” too many, if you ask me. But there is consolation in the thought that the woman wronged is on the threshold of freedom. Recent developments should bear that out.

First, there was Kerwin Espinosa who, in April, reversed his claim that he had given protection money to De Lima when she was justice secretary during the Aquino presidency. He said he was “misled by the police” into signing an affidavit in exchange for not facing drug charges himself. He has apologized to De Lima.

The Inquirer banner story by Marlon Ramos said that on May 24, Marcelo Adorco, presented by DOJ as Espinosa’s bodyguard, recanted his 2016 and 2017 allegations that De Lima was behind the drug trade in Bilibid Prison. In April, Ronnie Dayan, De Lima’s former aide and coaccused, denied that De Lima was involved in any drug dealing. Convicted murderer Joel Capones also withdrew his testimony against De Lima. Well, another convict-turned-prosecution-witness Noel Martinez also told the court that he had no knowledge or involvement in the drug-related charges against De Lima.

According to the Inquirer report, high-profile convict Vicente Sy denied his earlier claim that he contributed to De Lima’s senatorial campaign. Sy told the court that he never met nor gave money to De Lima. He died of a heart attack in July last year.