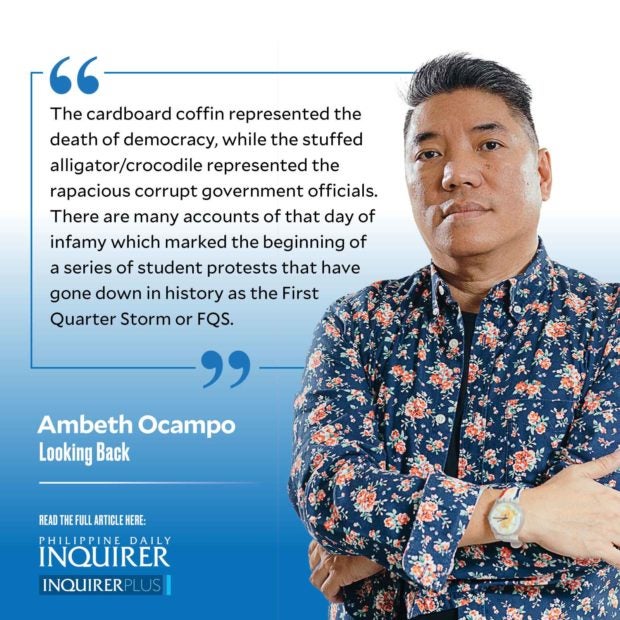 Rebuilt after World War II, the present National Museum building is more than a jewel box of Philippine art and culture. It is a repository of History and Memory, or should I say, the repository of Histories and Memories. When people refer to Congress these days, they often refer to the House of Representatives, not the Senate.

Congress as an institution covers both houses that in a previous time were in one building whose upper floors were occupied by the Senate, hence “upper house,” while the House of Representatives occupied the lower floors hence “lower house.”

On Jan. 26, 1970, the present National Museum building was the venue for the opening of the 7th Congress, when Ferdinand Marcos Sr. delivered his fifth State of the Nation Address, the first Sona of his second term. Contrary to popular belief, Marcos Sr. was not the only Philippine president to win re-election. His was second to Quezon, who was elected in 1935 and re-elected in 1941. Gathered outside the building on Jan. 26, 1970, was a huge student demonstration that ended up in violence that painted the city red.

The Official Gazette reported the President’s Day began with Marcos Sr. administering the oath to a group of ad interim colonels. What it did not report was that some were promoted against Marcos Sr.’s own policy that all candidates to full colonel had to be graduates of the Armed Forces of the Philippines Command and General Staff Course. It also omitted the surrender of Negrito Huk Commander Alfredo David aka “Commander Mini-skirt.” Then, shortly before 1 p.m., a delegation from Congress arrived in Malacañang to formally inform the President that the 7th Congress was convened. President and Mrs. Marcos then left for Congress:

“On arrival at the session hall of the House of Representatives the First Couple was given a standing ovation by all those gathered. The President took exactly 40 minutes to deliver his speech. Then, after the thunderous ovation died down, he shook hands with Congress leaders and prominent guests, including Vice President Fernando Lopez and Mrs. Lopez. Shortly after, he and the First Lady left for Malacañang, arriving there at about 7 p.m.” Details of the student demonstration outside, as well as its violent dispersal not in the gazette, made the news the following day. Marcos Sr. gives his version of events in his diary:

“Opening session of Congress. State of the Nation Address and Riots by the demonstrators in front of Congress.

“… After the State of the Nation Address, which was perhaps my best so far, and we were going down the front stairs, the bottles, placard handles, stones and other missiles started dropping all around us on the driveway to the tune of ‘Marcos, Puppet’ [Marcos Tuta!] chant.

“As the intelligence reports it, the demonstrators had brought a coffin which they carried from the street below to the site of the flag pole, where they pushed it into the faces of the policemen. The policemen then threw the coffin to the street below and may have hit two demonstrators. The latter then took out a stuffed alligator from inside the coffin and threw it at the policemen who threw it back. Then the wood, bottle and stone throwing which caught us at the front stairs.

“I could not go into the car as Imelda kept standing on the stairs. Col. [Fabian] Ver tried to push me inside, but I ordered the First Lady be fetched and put inside first. Since she could not be pulled by anyone, I had to do it myself. I am afraid I pushed her into the car floor much too hard. Anyway, I bumped my head, behind the right ear, against the car’s door side and twisted my weak right ankle again.

“We moved out under a hail of stones. But PSA agent covering me, Agent Suson was hit in the forehead and left eyelid and took four stitches. I thought it was Col. Ver as his barong was splashed with splotches of blood but Suson’s blood had spilled on him as he was on my right.

“We saw some of the action over television after we arrived at the palace.”

The cardboard coffin mentioned above represented the death of democracy, while the stuffed alligator/crocodile represented the rapacious corrupt government officials. There are many accounts of that day of infamy which marked the beginning of a series of student protests that have gone down in history as the First Quarter Storm or FQS.