Giving foundlings their due 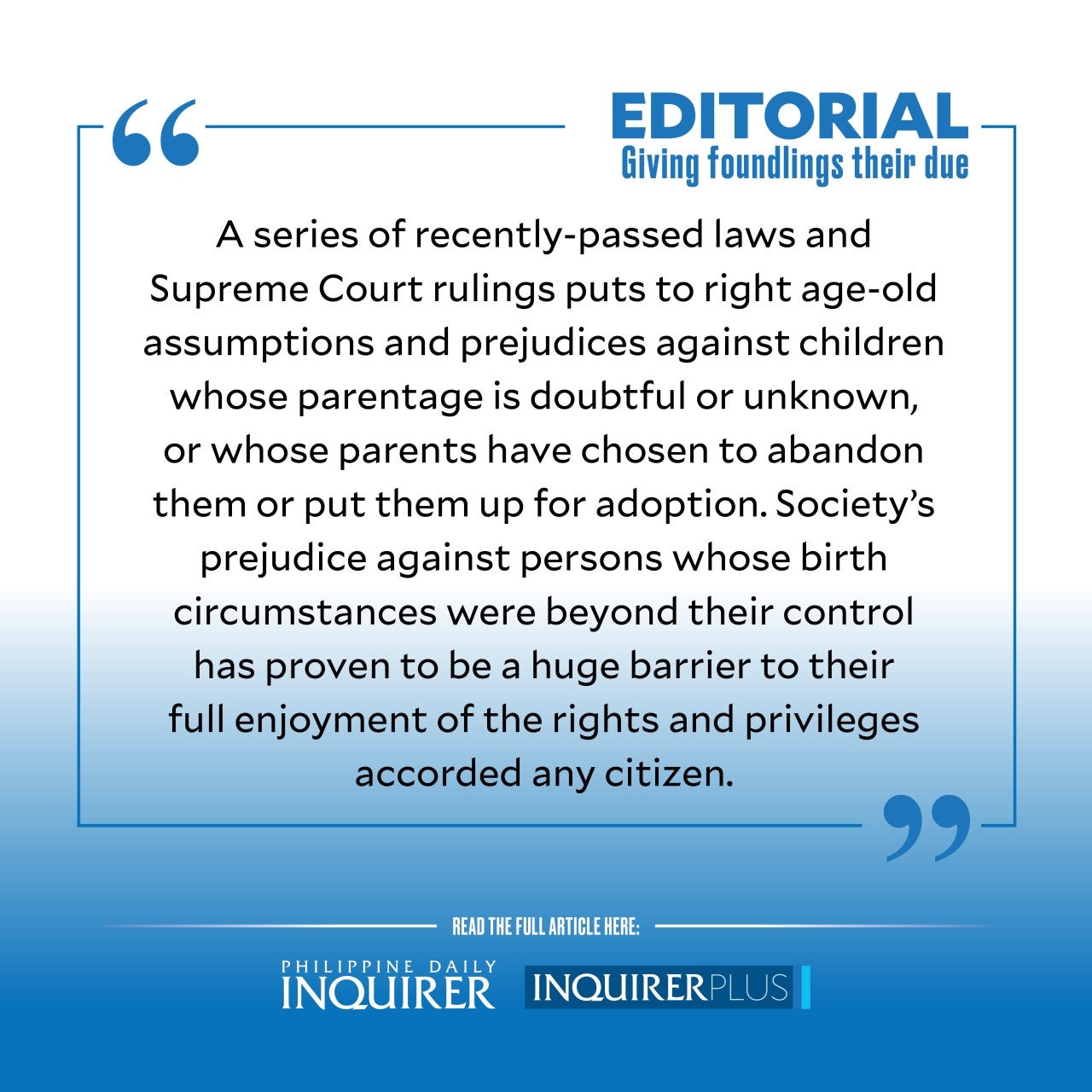 In the feverish obsession over this year’s campaign season and elections, most Filipinos are unaware that something radical has been happening under the radar. This is the series of recently-passed laws and Supreme Court rulings that puts to right age-old assumptions and prejudices against children whose parentage is doubtful or unknown, or whose parents have chosen to abandon them or put them up for adoption. Society’s prejudice against persons whose birth circumstances were beyond their control has proven to be a huge barrier to their full enjoyment of the rights and privileges accorded any citizen. Now, thanks to the legislature and the Supreme Court, that anomalous and unjust situation is being addressed.

The latest in this series of social reform measures is Republic Act No. 11767, or the Foundling Recognition and Protection Act, that was signed into law earlier this month by President Duterte. The law says that “regardless of the status or circumstances of birth,” a foundling or abandoned infant found in the country or in Philippine embassies, consulates, and territories abroad is presumed a natural-born Filipino citizen. This means the child “shall be accorded with rights and protections at the moment of birth equivalent to those belonging to such class of citizens whose citizenship does not need perfection or any further act.”

Perhaps the most famous foundling in recent memory is Sen. Grace Poe, who coauthored with Sen. Risa Hontiveros the Senate version of the bill that became the new law. Indeed, as she recalled to the media, the bill stems from a landmark Supreme Court case in 2016 when her qualification to run for president was questioned due to doubts about her parentage. She was found as an infant in a church in Iloilo and later adopted by show biz couple Fernando Poe Jr. and Susan Roces. Her citizenship was in doubt until the high tribunal ruled that she was a natural-born Filipino.

Her candidacy “became a crucial vehicle to help clarify the status of foundlings in the country,” Poe said, adding that because of her presidential run, “this issue on foundlings was discussed and as much as possible, there was clarity given to it with the Supreme Court decision, although it is important to clarify even more with a law.”

The law is important, said the senator, “not just to me but also to hundreds of foundlings who may still encounter some difficulties, not just (in) running for public office but even (when) serving as lawyers, doctors, teachers because they will have to be natural-born Filipino citizens.”

The Foundling Recognition Act would erase any doubt about the citizenship of any foundling. It also assigns to the National Authority for Child Care (NACC), an attached agency of the Department of Social Welfare and Development (DSWD), state services related to the protection and welfare of foundlings, among them laying down rules for the adoption and legitimization of foundlings, and alternative child care options such as foster care.

The Foundling Recognition Act is of a piece with the recently-enacted RA 11642 or the Domestic Administrative Adoption and Alternative Child Care Act that simplifies domestic adoption and makes it less expensive.

Also in line with addressing the precarious situation of abandoned children or those whose parents voluntarily put them up for adoption was the recent ruling of the Supreme Court recognizing the right of adopted children to inherit from a deceased direct ancestor. In the process, the Court rejected the terminology of “legitimate” or “illegitimate” children who were born before their parents could get married. Instead, it adopted the use of the terms “marital” and “nonmarital” to describe the circumstances of the children’s birth and the civil status of the parents.

Slowly, gradually, with the application of legislative and judicial social activism, legal barriers to the full enjoyment of rights by adopted or abandoned children are falling down. Would that society similarly overhauls ingrained prejudices, attitudes, and judgment!