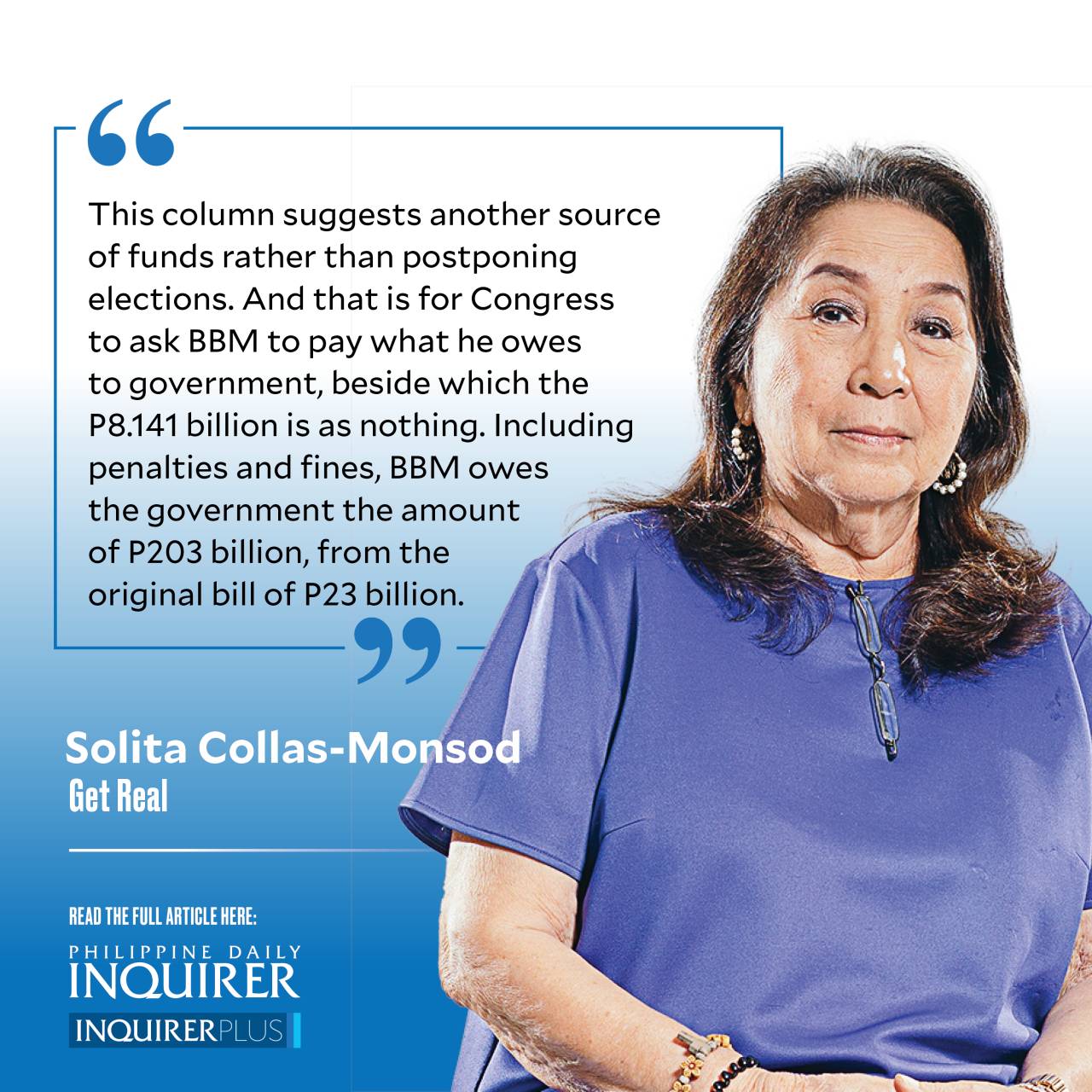 House Majority Leader and Leyte Rep. Martin Romualdez, first cousin of Ferdinand “Bongbong” Marcos Jr. (BBM), who is set to be Speaker, has indicated that the first moves of the next Congress will be the following:

To pass pandemic-related stimulus legislation. They know the title of this legislation, but have no inkling yet on its contents. The title? “BBM”—for “Bayan, Bangon Muli,” you understand. You can tell, Reader, this will be a brown-nosing Congress like the present one.

To postpone the barangay elections scheduled for this December. In an ambush interview, Romualdez gave two reasons for postponement. One, the postponement was requested by the barangay officials themselves (!) and secondly, there would be a savings of the P8.141 billion election costs which could be used for the “BBM” stimulus.

This column will address itself to the barangay election proposal.

That the request was made by some barangay officials (he does not say who) is obviously self-serving, so how could it be considered a valid request? Haven’t the barangay officials already served one year more than their three-year term? Is this a political pay-off? Not at the expense of the Filipino, please.

BTW, then Sen. Bongbong Marcos sponsored a bill lengthening the term of the barangay officials to five years, from its present three. The reason? To give the officials more time to execute their plans. Well, using that logic, shouldn’t the terms of municipal, city, and provincial officials also be given five years—and why five, for heaven’s sake? Think of how complicated election schedules are going to be. Unbelievable.

Let’s go the second reason. The P8.141 billion savings that could be used as “ayuda” for the poor Filipino. How thoughtful. Again, using the same logic, Congress should have postponed the national elections, which costs the government much more! Silly, right?

This column suggests another source of funds rather than postponing elections. And that is for Congress to ask BBM to pay what he owes to government, beside which the P8.141 billion is as nothing. Including penalties and fines, BBM owes the government the amount of P203 billion, from the original bill of P23 billion. I’ll go even one step further: that BBM should immediately pay the original assessed amount, and then negotiate the fines and penalties later. How about it? That way, the Filipinos win the barangay elections they deserve, and they also win the taxes owed to them, even if 25 years late.

A very good suggestion, don’t you think, Reader? Even if I say it myself.

Now, assuming that there will be no more moves to postpone the barangay elections, we Filipinos should prepare for it, as early as now. Did you google Manny Valdehuesa, Reader? He tells you why we should be involved with our barangays. And there’s more good news: We can use Ria Villanueva-Dam’s HOPE app for the barangay elections!

The HOPE app was launched last April 22. Ria was interviewed by Rico Hizon at CNN and Karen Davila at ANC, where she explained that it was developed to empower every citizen to watch and guard their vote, by providing a secure platform of communications where the citizen can upload pictures, complaints, and reports on the elections, and be assured of a response. It can also do a parallel election count. You can download it on both Apple and Android, so you can see for yourself what you can do with this app at your service.

Though the launch was too close to Election Day, the app still was able to record more than 17,000 incident reports, which it is still in the process of analyzing.

More to the point, using what was on the Commission on Elections (Comelec) website, they were able to finish tabulating 97 percent (that’s all the Comelec had) of the election returns (ERs) by the evening of May 12. It took them another five days to validate, using pictures of ERs its users had sent, plus ERs sent to the National Citizens’ Movement for Free Elections (Namfrel). They also used a third validation procedure which I am not familiar with.

Well, what does she say about the elections and its result? Her full statement is too long to quote, but she essentially says that they found no discrepancies between the ERs generated from the VCM (vote counting machine) and the ERs in the Comelec website. However, she cannot speak to whether the ERs reflect the actual votes tallied by the VCM. That is the role of the random manual audit being conducted by an independent group (Lente, Namfrel, PICPA, among others).

So we wait. Meanwhile, we can use HOPEWATCH22 for the barangay elections. Onward.