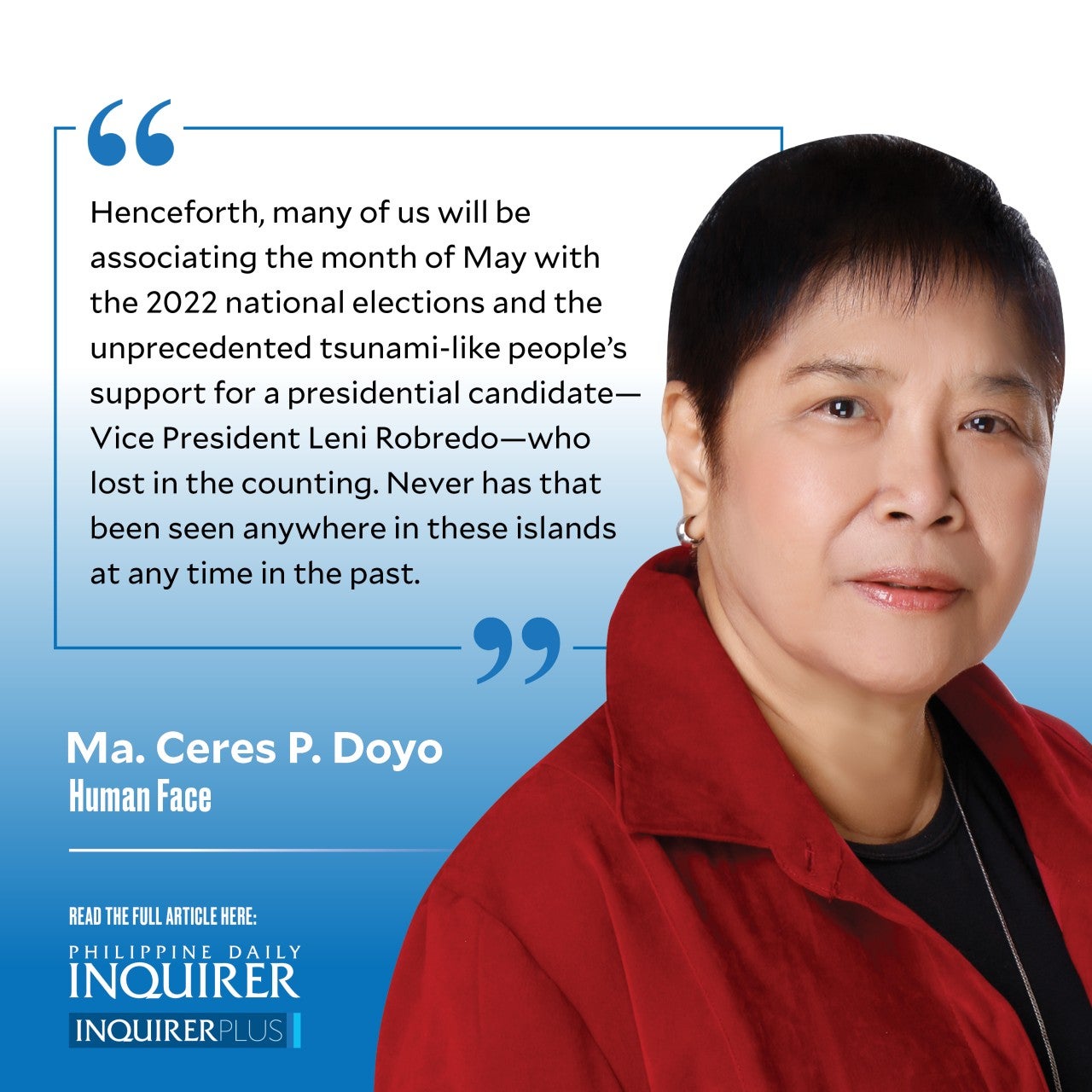 Before I proceed in a sober tone, may I shout out with scorn: Ang mga pinagpalista at pinangakuan ay nagtatanong: “Saan na ang GCash?” (Those who were made to enlist and were given promises are asking: “Where is the GCash?”) This is not hearsay. To those concerned, I say: You have spat on the poverty of the poor and made them beg for crumbs.

Now, soberly but with a victorious spirit undiminished by taunts, insults, bashing, and hateful language that could have been spawned in Hieronymus Bosch’s depictions of hell, I sing:

But what is May without the Flores de Mayo and the Santacruzan? What’s life without the childhood memories of May, of blazing summers and sudden downpours, of food and fiestas, of beaches and rivers, and flowers and songs?

I was on a Marian pilgrimage with friends two days ago, limping with a week-old excruciating pain on my right knee. Well, I can’t believe that 90 percent of the pain disappeared the day after. As poet Alfred Lord Tennyson said: “More things are wrought by prayer than this world dreams of.” And with the help of a special oil with the scent of roses.

Henceforth, many of us will be associating the month of May with the 2022 national elections and the unprecedented tsunami-like people’s support for a presidential candidate—Vice President Leni Robredo—who lost in the counting. Never has that been seen anywhere in these islands at any time in the past.

As of this writing, former senator Ferdinand Marcos Jr., son and namesake of a dictator ousted by people power in 1986, is the presumptive winner. He will reclaim the pinnacle of power that was his family’s for some 20 long years, years that many victims of human rights violations consider a dark and inglorious past. For balance, may I add that there are those who believe that those years were “golden.”

As of this writing, the presumptive winner Marcos Jr. and his family are in Melbourne to take a breather and whatever else. On the other side of the world, losing presidential contender VP Leni is attending her youngest daughter’s graduation in New York University. (On a scholarship, Jillian finished with two majors.) There was the VP, flying economy, pushing her luggage, riding subways without security. But Fil-Ams greeted her warmly. With her term ending on June 30, VP Leni should now be segueing into private life while a dynasty will ascend to the heights.

But unforgettable is the new force, the millions who showed up in VP Leni and Sen. Kiko Pangilinan’s campaign rallies, the enormous pink throng that dwarfed those of her opponents. The young, the strong, the aging, even the infirm, and, yes, the dying, showed up. Magnificat moments.

“Show up” are now bywords because of how, these past six years, VP Leni showed up in disaster areas, in the most remote and forgotten communities where many fear to tread. And in election debates, too, that her closest opponent shunned.

VP Leni lost in the counting and because of the heavily funded and enormous social media blitz for voters’ minds, a loss that is not only hers but also of many young people who hoped in her style of leadership that they thought they could emulate and, with their warm selves, support in the trenches where many dwell. But it is not to be.

But the loss might yet be an answer to unsaid prayers—so that those who believed may not have her to themselves only but to many more. When hope dimmed abruptly during the counting that was carried out with lightning speed, the image of steady Leni provided a ray of light. Having worked with those on the fringes of society, she rallied the “new force” and promised to be with them in the work ahead, away from the trappings of power, the stink in government, and the culture of corruption. A Magnificat moment.

The first part of her campaign cry, “Sa gobyernong tapat,” may not come to be, but the second part, “Angat buhay lahat,” is on its way. July 1, 2022, mark the date.

The tears are drying up for those who had bet on VP Leni for their children’s future. I think of Mary’s Magnificat, her cry of praise and gratitude to God who lifted her up. Many of us have had Magnificat moments in our lives. The Magnificat is Mary’s longest spiel in the Bible where she says, “You have thrown down the mighty from their thrones and exalted the lowly…” It is the story of VP Leni’s life.