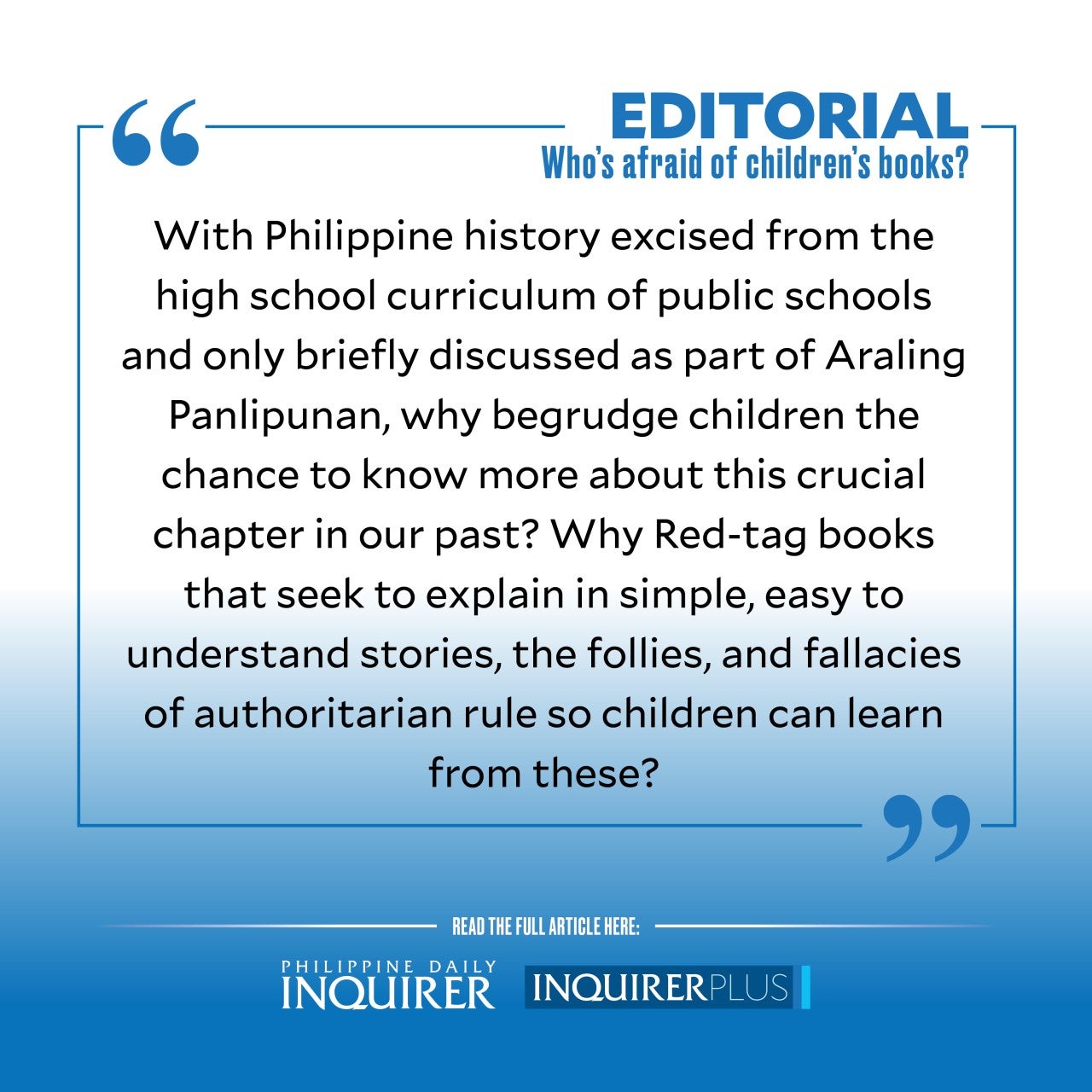 Why is the National Intelligence Coordinating Agency (Nica) so afraid of children’s books?

“[Y]ou are planting seeds of hatred and dissent in the minds of these children,” Monteagudo said of the family-run publishing house founded by National Artist Virgilio Almario in 1980.

In the same presser by the National Task Force to End Local Communist Armed Conflict (NTF-Elcac), its spokesperson, Undersecretary Lorraine Badoy, claimed that Adarna House was “infiltrated” by communists.

What is it about books that terrify these two grown-ups whose main preoccupation revolves around raising the Red bogey every chance they get? In March, the façade of Popular Bookstore in Quezon City was spray-painted with anti-communist graffiti, and so was that of Solidaridad, which was founded by the recently deceased National Artist F. Sionil José as a “literary salon” for prominent Filipino writers and political personalities.

While the NTF-Elcac denied being behind the vandalism, the task force last year instigated the pullout of progressive books from libraries, with the Cordillera regional office of the Commission on Higher Education calling on state universities and colleges to remove “subversive” reading materials from their libraries and online platforms.

Monteagudo in April last year linked—without proof—the workers’ union at the Senate to insurgents, describing it as “the eyes and ears” of the local communist movement. This time around, he has set his inflamed eyes on children’s books that talk about martial law, always a contentious issue.

Supporters of the late dictator Ferdinand Marcos Sr. have extolled martial law as a “golden era,” while critics point to Republic Act No. 10368, also known as the “Human Rights Victims Reparation and Recognition Act of 2013,” and its P10-billion reparations budget as a categorical acknowledgment of the rights violations during what is often considered one of the darkest periods in the country’s history. The court convictions of Marcos cronies and relatives for graft and plunder meanwhile attest to government corruption, while massive foreign debts from the period confirm the deteriorating economy at that time.

With Philippine history excised from the high school curriculum of public schools and only briefly discussed as part of Araling Panlipunan, why begrudge children the chance to know more about this crucial chapter in our past? Why Red-tag books that seek to explain in simple, easy to understand stories, the follies, and fallacies of authoritarian rule so children can learn from these? By suppressing the truth and critical thinking as part of their government mandate, aren’t Nica and the NTF-Elcac stoking hate and disrespect for the state—the very same accusations they’re now leveling against Adarna House?

Even acclaimed English fantasy writer Neil Gaiman was so affected by the Red-tagging of this homegrown publisher that he tweeted, “Not good.”

Fortunately, after provoking outrage, Monteagudo’s rash accusations have resulted in a buying spree of martial law-themed publications among Filipinos conscious of the need to preempt any attempt to ban or burn books that do not toe the government line. Already, netizens have been posting links to e-books and martial law titles that can be accessed for free, while others have pointed to libraries, bookstores, and online shops where copies can be had. There have been calls as well to preserve and protect original documents on martial law by detailing the list of archival materials and their locations, with librarians and archivists urged to be on the forefront of the fight against historical revisionism.

This call gained even more traction at news that malacanang.gov.ph, which stores the Presidential Museum and Library containing historical records of the martial law regime, was suddenly gone on Monday. After the general hue and cry that greeted this discovery, the Malacañang Museum said the website was “being updated” and would be back soon. But just to be sure that the records remain intact, netizens listed alternative links to the historical materials previously stored in the website and the public domain archive.org, where copies of such materials were uploaded.

As well, people have been posting and sharing the timely words of Czech writer Milan Kundera: “The first step in liquidating a people is to erase its memory,” he writes. “Destroy its books, its culture, its history. Then have somebody write new books, manufacture a new culture, invent a new history. Before long that nation will begin to forget what it is and what it was … The struggle of man against power is the struggle of memory against forgetting.”