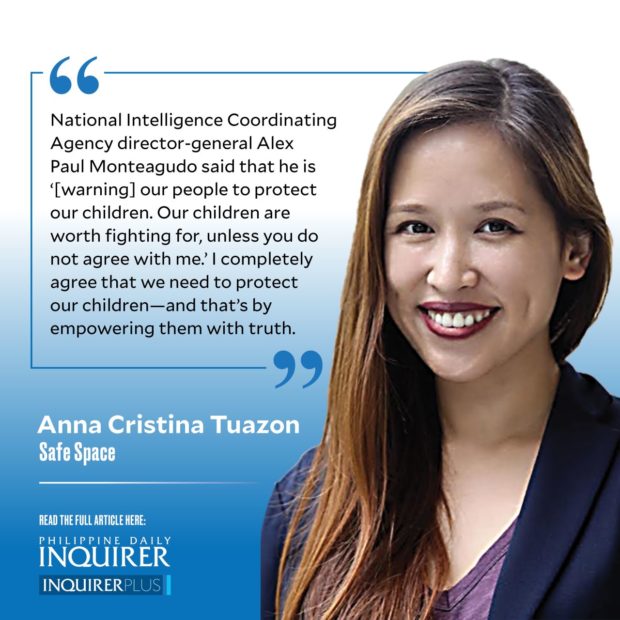 Last week, National Intelligence Coordinating Agency (Nica) director-general Alex Paul Monteagudo accused publisher Adarna House of “subtly radicalizing” Filipino children against the government for offering its “#NeverAgain” book bundle. All the books in the bundle tell stories about martial law and were published between 2001-2021 — way before the 2022 presidential elections where a Marcos was poised to win. Instead of telling children about martial law, Monteagudo says children should be “taught to recite the alphabet and pray to God.”

It is absurd to suggest that children should be limited to learning the alphabet — if they already have the ability to read children’s books, then obviously the time for teaching the alphabet has passed. There is a similar absurdity in telling children to instead pray to God, when the Bible is arguably a history book as well (one that depicts long-standing oppression and suffering of a group of people). The most dangerous absurdity of all, however, is the notion that any material that talks about martial law is inherently antigovernment. If someone else had won, would they have said the same thing? Or are they simply saying it because a Marcos is returning to power?

There is an important battle ahead — the battle for our children’s minds. It is not mere coincidence that Sara Duterte, someone with no educator experience, was designated as the incoming secretary for the Department of Education. Her statement highlighted the words “patriotic,” “peace,” and “discipline” — suggesting that she will prioritize conformity and compliance among our children. Never mind that our educational system suffers from a crisis of resources and infrastructure, with some teachers having to pay out of their own pockets to augment schools’ lack of resources. Never mind that our children are lagging behind their Asian counterparts in achieving basic comprehension and competency levels. Never mind that our public education system is still reeling from the consequences of two years of remote learning due to the pandemic, exposing the devastating impact of social inequality on access to learning. Never mind that they are not truly learning, as long as they keep quiet and follow orders.

As an ethical rule in child psychotherapy, I do not allow the goal of “I want my child to behave” without further exploration. The goals of any child-focused work should, first and foremost, benefit the child directly and not just benefit the parents solely. We can definitely teach children to appreciate rules and limits, not for its own sake but in how these rules and limits can benefit the child and others. I encourage the parents to provide good reasons for rules that they set at home, instead of using the traditional “because I said so” or “my house, my rules.” The more a child understands why a rule needs to be put in place, the more likely they will respect this rule and follow it. Mere compliance of rules—when parents use the fear of punishment—will instead risk encouraging escape or cheating behaviors.

I also encourage parents to allow their children the space to say “no” or to disagree. From an abuse risk standpoint, it is much safer that they learn to say “no” without hesitation or shame. Disagreements should also be allowed because then our children will feel safe enough to express their true thoughts and feelings. Productive disagreements also encourage openness to different perspectives and teach us that it is okay to change our minds in light of new or more compelling information, a very important skill that safeguards us from disinformation and polarization. It is much better to teach our children to elaborate on their dissenting opinions than to silence them.

When is it time to teach them about the facts of life? Developmental experts say as soon as possible. For kids who are adopted, for example, it is better to be honest with them as soon as possible about where they come from and guide them through the process of understanding their origin. For sex education, experts say we can provide age-appropriate education to kids as young as two years of age in order for them to differentiate “good touch” from “bad touch.” Preschool-aged kids already have the capacity to learn about racism, slavery, oppression, and other social injustices. The earlier they learn about it, the less likely they are to grow up to be perpetrators of oppression. Children certainly have the capacity to understand about the roles and structures of government and differentiate different forms of government (dictatorship vs. democracy). We have no problem with telling our children gruesome fairy tales of witches and wolves eating children, as in “Hansel and Gretel” and “Red Riding Hood,” but we have a problem with telling our children how democracy was restored in our country?