A marketplace of fake news 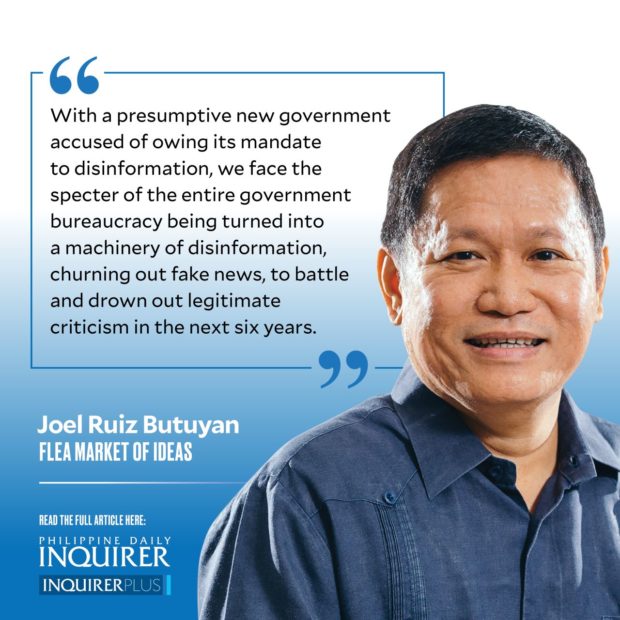 Detractors of Ferdinand Marcos Jr. hold the view that the people did not elect him as our country’s next president. Fake news did. This is actually the second time that disinformation has been credited with electing our country’s top leader. The first time was in 2016 when social media was allegedly flooded with disinformation that helped Rodrigo Duterte win the presidency.

Because of the perception that fake news or disinformation played pivotal roles in our past two presidential elections, it is not far-fetched to imagine that fake news will dislodge guns, goons, and gold as the weapon of choice of politicians who scheme to manipulate our elections.

If fake news was able to resurrect the Marcos family name, which has long been associated with one of the darkest periods of Philippine history, and transform it to a name that evokes the “golden age” of our country, then political dynasties with far lesser sins are surely taking note, and they will follow suit. Fake news will grow exponentially in the years to come, if things stay the same.

If our marketplace of ideas were a military battlefield, and the people with conflicting political beliefs were soldiers on opposite sides of the field, the trolls can be compared to robot soldiers who have entered the battle arena. The battlefield of ideas is no longer just between real people battling against each other, but real people versus real people augmented by tens or even hundreds of thousands of fake people. With this new reality, is there a need to modify the rules of war, so to speak, with the entry of these virtual robot soldiers? Is there a need to amend the rules that apply to the marketplace of ideas with the proliferation of trolls who spread fake news?

Can we still rely on the old saying that the antidote to bad speech (or false speech) is more speech, even with the possibility that speech, which speaks of truth, may be drowned out by speech that spreads fake news, say 10 is to one, because of trolls? Can we still rely on the old adage that truth will prevail in the end, even when our traditional sources of truth have their hands tied, so to speak, while the hands of the prophets of fake news are freed from any form of restraint?

The traditional media (newspapers, television, and radio stations) have to comply with so many regulatory requirements, like business registration, grant of franchise, payment of taxes, labor laws, and authorship liability. In contrast, the purveyors of false news, because they seek refuge in anonymity, are shorn of similar responsibilities? Shouldn’t there be a push to apply existing laws and regulations on persons who engage in the commercial distribution of information on social media, while debate is ongoing on the propriety of enacting new laws to address the pandemic of fake news?

On the other hand, there is also the issue that anonymity has always been a necessary refuge for our activists in times of repression. Our heroes during the Spanish colonial period and the Marcos dictatorship needed to retreat to the haven of anonymity to expose the abuses of the powers that be.

A few years ago, I went to five Southeast Asian (SEA) countries to share the Philippine experience on free expression. I sensed a deep aspiration among our neighbors to have the kind of free speech that we robustly enjoy in our country. But with fake news flooding our marketplace of ideas, does the Philippine experience serve as a cautionary tale to our SEA neighbors on the limits of free expression?

These are the questions that our country must ponder on as we reel from streams of fake news even after the elections. With a presumptive new government accused of owing its mandate to disinformation, we face the specter of the entire government bureaucracy being turned into a machinery of disinformation, churning out fake news, to battle and drown out legitimate criticism in the next six years.