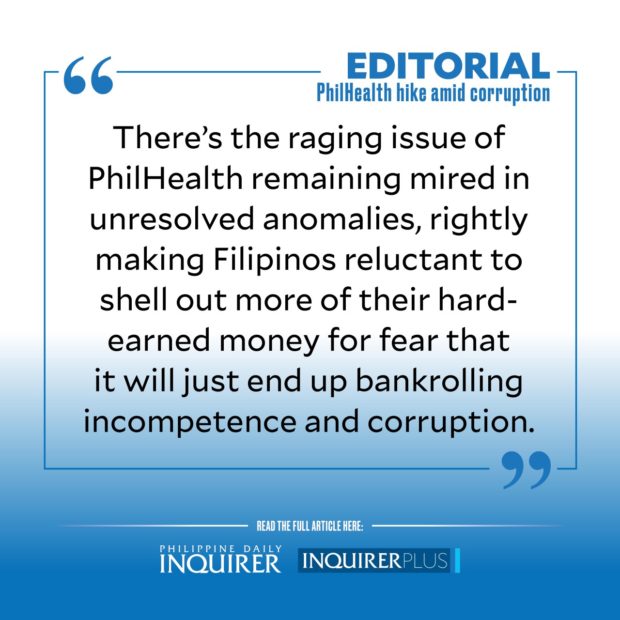 As Filipinos were transfixed by the results of the May 9 elections, the state-run Philippine Health Insurance Corp. (PhilHealth) announced last week that it was going ahead with the increase in its premium collections starting June to supposedly finance essential benefits and services to its beneficiaries here and abroad.

PhilHealth released the updated premium contribution schedule, which showed that the state health insurer will increase its premium collection rate to 4 percent of the basic monthly salary, from the current 3 percent, of its members.

For those earning P10,000 and below, the increase to 4 percent means a monthly premium of P400 to be deducted from their salary, all the way to the maximum of P3,200 for those earning a monthly basic salary of at least P80,000.

What’s more, the new collection rate covering all direct contributors—including employees, self-earning individuals, practicing professionals, kasambahays, and overseas Filipino workers—will be applied retroactively to January this year, which means that PhilHealth will collect within the year an extra premium of 1 percent of the monthly salary to cover for the difference from January to May.

PhilHealth defended the premium hike, saying that it is provided under the Universal Health Care Act of 2019, which mandates that the premium rate will increase by increments of 0.5 percent every year starting from 2.75 percent in 2019 to 5 percent in 2025.

The increase from 3 percent in 2020 to 3.5 percent was supposed to be implemented starting January 2021, but President Duterte made the populist move and asked PhilHealth to postpone it because of the higher expenses and uncertainties amid the raging COVID-19 public health and economic crises.

But now that the alert levels have gone down to their lowest with the decline in the daily COVID-19 case rate, PhilHealth wants to make up for lost revenue and decided to push through with the increase, an unpopular step that has been criticized from all quarters, believing that such a hike could not come at a worse time as Filipinos are still struggling with the pandemic and are now confronted with skyrocketing prices of food and fuel.

Then, there’s the raging issue of PhilHealth remaining mired in unresolved anomalies, rightly making Filipinos reluctant to shell out more of their hard-earned money for fear that it will just end up bankrolling incompetence and corruption.

To recall, the Senate began in August 2020 its inquiry into allegations of rampant corruption, incompetence, and inefficiency in PhilHealth, which was among the frontline government agencies tasked to confront and address the devastating COVID-19 pandemic, prompted by the call of several PhilHealth officials for the Senate’s help to “drain the swamp” or root out corruption in the blighted agency.

Among the issues raised were PhilHealth’s alleged overpriced ICT equipment; the manipulation of PhilHealth’s financial statements; and the questionable implementation of advanced payments to health care institutions through the misused and abused interim reimbursement mechanism (IRM) policy.

The inquiry concluded with the Senate committee of the whole recommending the filing of charges against Health Secretary Francisco Duque III and then PhilHealth chief Ricardo Morales, as well as several top-ranking officials, after finding basis for charges of misuse of PhilHealth funds, indeed a “conspiracy to bankrupt PhilHealth of its funds and resources,” according to Senate President Vicente Sotto III.

Morales and several PhilHealth employees and officers were also slapped with a separate graft charge by the National Bureau of Investigation for their alleged involvement in the questioned release of P33.8 million funds under the IRM that are intended for “fortuitous” events, such as the COVID-19 pandemic, but ended up with B. Braun Avitum Philippines Inc., a dialysis center that operates nationwide.

And while PhilHealth was being hounded by allegations of improper fund releases, it also came close to being cut off by private hospitals who had threatened to sever ties with the agency over mounting unpaid legitimate claims involving rendered medical services to PhilHealth members.

House Assistant Minority Leader and Gabriela Women’s party list Rep. Arlene D. Brosas stressed that the increase would “bite hard on already depressed wages amid steep prices of goods and services.” She said: “The new wage cut is P400 to P3,200, and it will only swallow the additional wage of P33 per day in the National Capital Region,” Brosas said. “It will bring more hardship to the people immediately after the elections. This is cruel.”

As Senate Minority Leader Franklin Drilon said during the Senate hearings, it was “absolutely outrageous and offensive” that amid the pandemic, PhilHealth continued to be haunted by controversies, making the contribution increase that PhilHealth seems bent on collecting an even more bitter pill to swallow.