First, they burn the books… 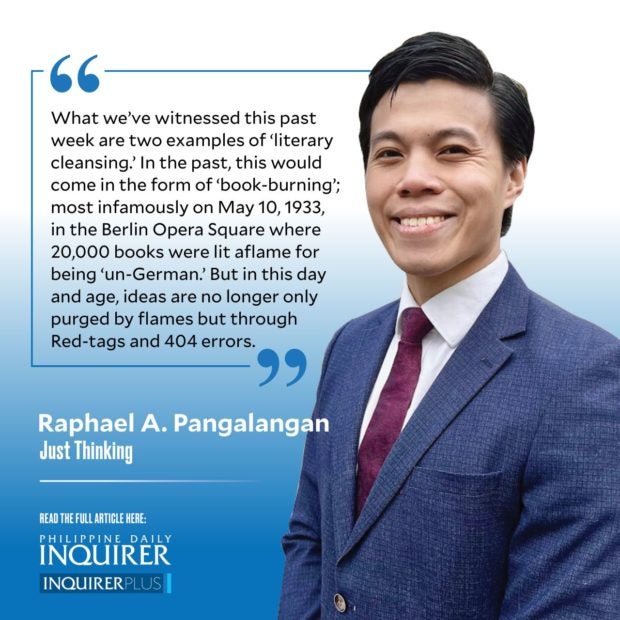 We may often overlook our own roles in history. Will we make it, or will we simply make it up?

Last week, the unfathomable was made possible: For the first time since 1986, the University of the Philippines took home the UAAP Men’s Basketball Championship. So queue the confetti and blaze the bonfire. The Fighting Maroons just made history!

And with that, it seems like Ferdinand Marcos Jr. might actually be onto something. Perhaps, we can revise the history books after all! History does not write itself. People do! We are its authors, pen in hand.

Now, before Marcos Jr. gets all too excited, we will need to burst his bubble: Though history can be made, it cannot be rewritten. What’s done is done, and life has no backspace.

But while we all know that a lie told a thousand times does not make it true, that is not to say the fabricators and fabulists won’t try to flog their fibs. And just a matter of days from the national elections, indeed they have. Already we hear the wheels of revisionism churning.

On May 11, the Adarna House was accused by the National Intelligence Coordinating Agency for “radicalizing” children against the government. Their offense? Offering a “#NeverAgain” book bundle on Marcosian atrocities at a 20-percent discount.

Five days later, the Presidential Museum and Library — an online repository of historical records on, among others, the martial law regime — went dark. Now, Malacañang claims that the page was simply suspended for updating, but with the presumptive election of Marcos Jr. to the presidency, there’s no ignoring the elephant in the room: “Updating” is easily doublespeak for “revising.”

To borrow from authorial hero Neil Gaiman: “Not good.” These simply will not do.

What we’ve witnessed this past week are two examples of “literary cleansing.” In the past, this would come in the form of “book-burning”; most infamously on May 10, 1933, in the Berlin Opera Square where 20,000 books were lit aflame for being “un-German.” But in this day and age, ideas are no longer only purged by flames but through Red-tags and 404 errors.

If we continue down this path, then we know what may soon follow. We cannot sit idly by. To borrow from the words of Heinrich Heine now etched into a plaque at the Empty Library — the memorial to the 1933 Nazi book-burning: “This was but a prelude. Where they burned books, they will eventually burn people.”

It’s been said that they who control the present control the past. And unfortunately, at times, they will succeed. But only for a time. Books may be burnt and webpages may go dark, but memories live on. No amount of Marcosian mythmaking will convince the fact-finders and truth-seekers among us to forgive or forget the Marcosian past. By standing for truth, we stand with each other.

Through collective memory, historical truth will never burn, tear, or crease like the parchment on which it was written. So, let us not now let history backslide into the past. Neither should it be left to the whims of tomorrow. We must codify it. We must protect it. We must commit it to minds and to hearts; today, tomorrow, always. Indeed, the few must remember, so the world will not forget.