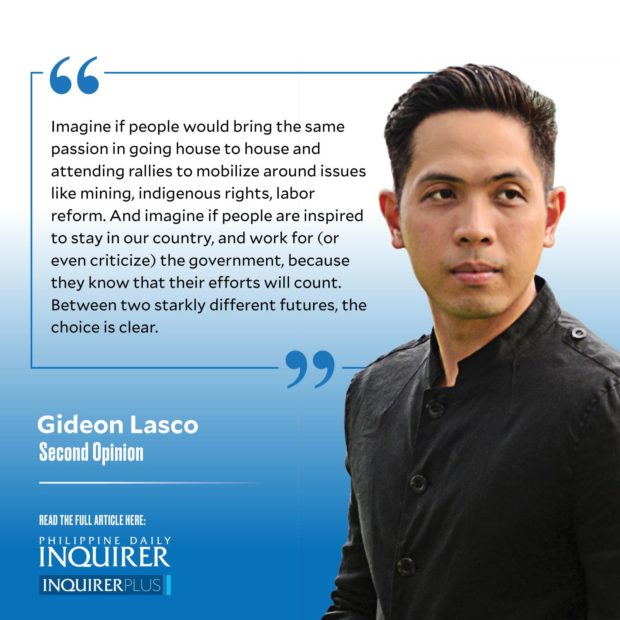 Los Baños, Laguna—We are living witnesses today to how elections can spell the difference between democracy and authoritarianism. Like the last presidential election that brought President Duterte to power, May 9 will be a decisive turning point for our country; one that will determine our future direction, as well as the individual choices of many Filipinos in the years to come.

On one hand, we have Marcos Jr., who is aspiring for the same office that his father, the late dictator, once held.

In the first place, he has refused to join debates or face the independent media, indicating that he would not view his office as a position of accountability and public trust. Like Mr. Duterte before him, he views himself as above the law, and such an outlook is likely to set the tone for an out-of-reach, out-of-touch government

Second, he has surrounded himself with some of the country’s most power-hungry politicians, indicating that he would preside over a continuity of the patronage politics that has seen convicted plunderers shamelessly running for office anew. Can our government handle another six years of people being appointed to various agencies on the basis of loyalty, not competence? And can we countenance more of the same obscene corruption?

Thirdly, instead of acknowledging (and apologizing for) the atrocities of his parents’ conjugal dictatorship—from mass torture to massive theft—Marcos Jr. has painted a fake and self-serving version of our country’s history, alongside lying about his own past without compunction. This suggests that he would institutionalize the whitewashing of the brutality of martial law and intensify the trolling and disinformation against truth-tellers and critics. It can also augur a further erosion of human rights and more attacks on our institutions.

Finally, like the most cynical of politicians, he has run a campaign that views voters as passive and disempowered; he did not even feel the need to present a platform, save for those empty calls for unity. Again, this is very similar to how the people were constructed under the Marcos dictatorship and the Duterte regime: as a docile citizenry that must be disciplined (“Sumunod na lang kayo!”). Alas, these toxic values will hold us back the way Ferdinand Marcos Sr. held our country back for decades.

On the other hand, we have Robredo, who is aspiring to be the first true outsider (that is, with respect to the political elites) to become president; the first to have actually seen many of the predicaments Filipinos have faced, either through her personal experience or through her extensive outreach to various communities.

Because she has spoken extensively about her platform—even allowing herself to be interviewed by her strident critics—we know, first and foremost, that a government under her will be oriented toward the poor and the marginalized, and that it will be responsive to the various crises we face—climate, education, public health.

Second, she has built an unprecedented coalition that represents not just different political factions, but of various regions, sectors, and demographics—representing a real effort toward achieving “unity.” On that basis, we can expect her to work for a more inclusive, representative government, one that would defend our sovereignty, not sell us out.

Third, she has not shied away from the truths of our past, indicating that she is committed to historical justice notwithstanding its political costs. As she declared last year: “We should constantly remind ourselves, in every chance we get, of the truth: That under the Marcos regime, the Filipinos suffered, stolen from, tortured, and killed; buried in debt, and made to pay for it until the next generations to come.”

Finally, her volunteer-driven campaign represents a new kind of politics that can lead to a more engaged and critical citizenry. Imagine if people would bring the same passion in going house to house and attending rallies to mobilize around issues like mining, indigenous rights, labor reform. Imagine if people are inspired to say what they feel is right because they know that they will be heard. And imagine if people are inspired to stay in our country, and work for (or even criticize) the government, because they know that their efforts will count.Between these two starkly different futures, the choice is clear.

And if we exercise our right to vote, this choice is ours.