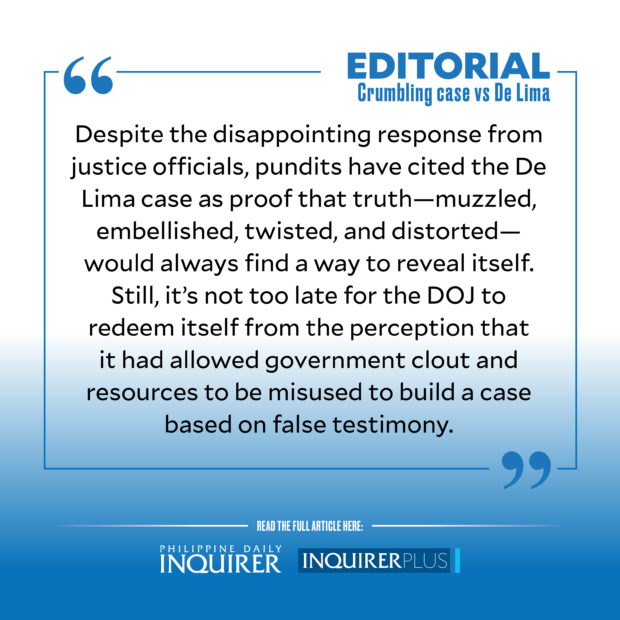 When the International Criminal Court (ICC) resumes its investigation into this administration’s drug war killings and President Duterte’s possible crimes against humanity—currently paused at the request of the Philippine government—it could easily point to the De Lima case as illustrative of the country’s flawed justice system.

Detained for five years now, Sen. Leila de Lima is facing multiple drug cases that her supporters, including international rights groups, insist were fabricated. The charges, based mainly on the testimonies of drug convicts and felons, have been widely seen as political vendetta against the former chair of the Commission on Human Rights who spearheaded the 2009 investigation of the infamous Davao Death Squad that implicated then Davao City Mayor Rodrigo Duterte.

Several witnesses against the senator have since recanted their testimonies, citing threats and coercion from government officials. Among them were De Lima’s former aide and coaccused Ronnie Dayan, as well as convicts Hans Anton Tan, Jerry Valeroso, and Peter Co— who changed their statements at the congressional hearings when they testified in court—and high-profile drug convict Vicente Sy who later died in prison.

Espinosa last week filed a counteraffidavit before the Department of Justice (DOJ), saying he had “no other option but to invent stories” linking the senator to the illegal drug trade because of “pressure, coercion, intimidation and serious threats to his life and (that of) family members from the police.” Espinosa denied having had any dealings with the senator as he had originally told a November 2016 Senate hearing, just 18 days after his father was killed in jail allegedly while being served a warrant by the police.

Over the weekend, Ragos told several reporters that former justice secretary Vitaliano Aguirre had “interrogated and coerced” him to testify against De Lima. “I couldn’t do anything back then,” Ragos said. “If the secretary of justice himself is coercing you, what can you do?”

Although Aguirre has denied coercing Ragos and Espinosa and questioned the timing of their recantations, these were greeted with demands for De Lima’s immediate release, and a quicker resolution of her much-delayed and oft-postponed trial. In a statement last week, Amnesty International said, “the government must immediately and unconditionally release (De Lima) and hold accountable those responsible for her unjust detention and the various human rights violations she has had to endure.”

You’d think such heavy revelations would at least merit investigation from the justice department, especially since its former chief was implicated in what appears to be obstruction of justice. Instead, the government remains unmoved, with acting presidential spokesperson Martin Andanar dismissing as “pure hogwash” claims that the government had fabricated testimonies against De Lima.

Prosecutor General Benedicto A. Malcontento also downplayed Ragos’ statement, saying it won’t affect the drug charges against De Lima since the DOJ was not “solely relying on Ragos’ testimony, as he is not the star witness in the cases.”

Despite the disappointing response from justice officials, pundits have cited the De Lima case as proof that truth—muzzled, embellished, twisted, and distorted—would always find a way to reveal itself.

Still, it’s not too late for the DOJ to redeem itself from the perception that it had allowed government clout and resources to be misused to build a case based on false testimony. Instead of preparing perjury charges against Ragos and Espinosa, shouldn’t the DOJ put the prosecutors handling the De Lima case on temporary leave as it investigates the witnesses’ claims of coercion from the agency’s top officials? As for Malcontento’s absurd contention that Ragos, in the future, might claim “coercion,” this time from the defendant, to again change his testimony, the DOJ official might want to check how De Lima could manage that feat, given that she is detained and has no access even to a cellphone, laptop, or media interview.

With the next administration set to take over in a few months and Mr. Duterte about to lose his immunity from suit as president, now would be the best time to show the world—and the ICC in particular—that the country’s justice system has the capacity to repair itself and function within the realm of law. A just, even-handed, and thorough investigation into Ragos’ and Espinosa’s revelations would be a good start.