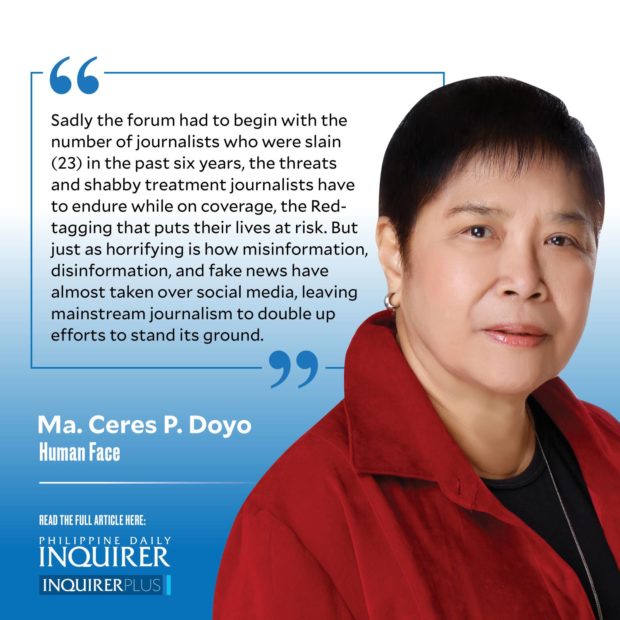 On May 3, World Press Freedom Day, journalists gathered via Zoom to discuss, reflect, and exchange views on the topic “The State of Media Freedom in the Philippines: Journalism Under Siege.” Sadly the forum had to begin with the number of journalists who were slain (23) in the past six years, the threats and shabby treatment journalists have to endure while on coverage, the Red-tagging that puts their lives at risk. But just as horrifying is how misinformation, disinformation, and fake news have almost taken over social media, leaving mainstream journalism to double up efforts to stand its ground (I almost wrote “to reclaim its place”) in legitimate news gathering and reporting.

The forum was held six days before the May 9 national elections when campaigns were at fever pitch, but journalists found time. Thanks to the Freedom for Media, Freedom for All (FMFA) Network, and the Wag Kukurap Coalition Eleksyon 2022. FMFA members include the Philippine Center for Investigative Journalism, Center for Media Freedom and Responsibility, National Union of Journalists of the Philippines, and several media groups. Thanks, too, to the younger crop of journalists who gave fresh insights and discoveries, (yes, discoveries!), which were the result of heightened vigilance and tireless spadework that revealed evil machinations on social media to subvert the truth. I was aghast!

Here is the pledge that hundreds of journalists have signed and which was read and affirmed at the forum. Those who are not journalists toiling in the trenches can draw from this pledge a picture of a minefield that the harbingers of the word must tread.

Election integrity is not just about credible counting of votes, but about clean, level, legal, transparent, and accountable campaigning;

Citizens need issues and debates to be clarified, not simply amplified.

– Put voters and the integrity of the electoral process at the center of our reporting.

– Focus on issues not just on personalities.

– Examine the track record and qualifications of candidates and political parties vying for public office and hold them accountable for the veracity and honesty of their every statement and promise.

– Cover as responsible and accountable the institutions mandated to ensure an even, orderly, and credible electoral playing field.

– Stand in solidarity with each other when any journalist or news organization is harassed by state agents, political parties, candidates, or private groups for their evidence-based journalism.

– Be accountable to the public. We will hold each other to higher standards of impartiality, credibility, and integrity.

In line with these principles, we commit to:

– Challenge and correct statements and claims that have no basis in fact.

– Report on the partisan activities of government officials, including those working for national and local agencies, the courts, law enforcement, and the armed services.

– Monitor the independence of the Commission on Elections, the courts, the military, the police, teachers, and all other individuals, and entities involved in the conduct of the election.

– Highlight the efforts of the public and private sectors to uphold the honesty and integrity of elections.

– Monitor vote-buying, campaign spending, and the use of public funds to win elections.

– Contextualize reporting on surveys and the winnability of candidates. We will not report on surveys without verifying the source of the polling data, the track record of the companies conducting the polls, the methodologies used, and the questions asked.

– Organize and report on town halls and debates, and encourage candidates and citizens to take part in them.

– Uphold codes of ethics and professional conduct and disclose potential conflicts of interest.

– Make a clear distinction between reportage and opinion.

– Promote safety, public health, and security protocols for and among journalists, and be mindful of the impact of our work on the safety and well-being of the people and communities we interact with in the course of our reporting.

– Share best practices, knowledge, and experience, and raise our individual and collective capacities and competencies in covering elections—as well as the politics, issues, policies, leaders, and people beyond the elections.I add, so help us God. May the universe conspire with us and our efforts to make the truth emerge and blaze during our darkest moments.