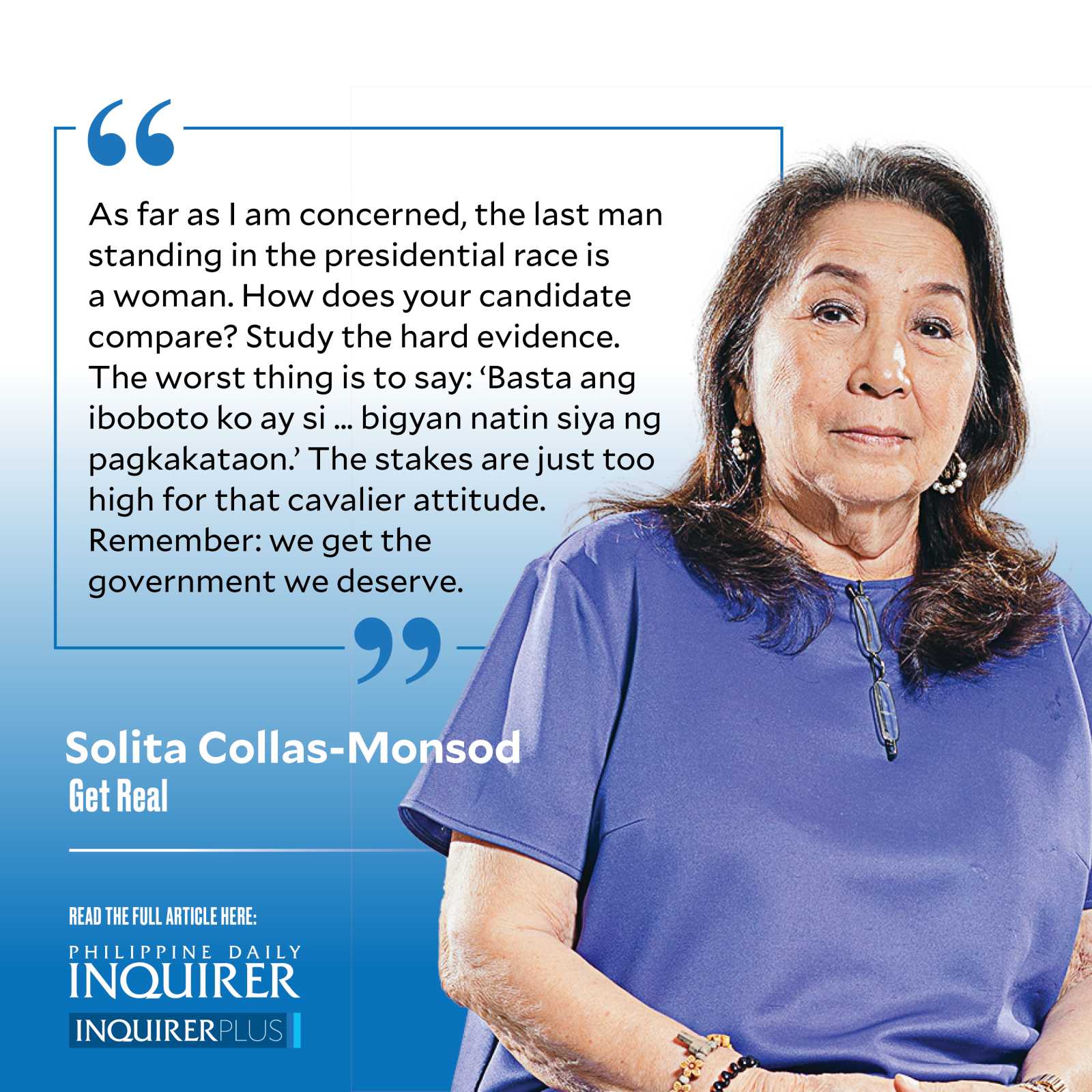 Nine days to go, Reader, before we cast our vote for the leaders of our country. The choice is in our hands. In last week’s column, I assessed my candidate, Vice President Leni Robredo, on her integrity and honesty, which is the bedrock competency of any leader—not on the basis of what she says, because words are cheap, but on what she has done. Because as the human resource (HR) experts say, past performance predicts future performance. Have you assessed your candidate/s in the same way?

There are other competencies that our chosen leaders must show—I have seen various lists and you can Google them for yourself. But in a crisis situation, three others stand out: learning agility, inspires and motivates others, and communicates powerfully. So let’s measure Leni against these:

2. Learning agility. We know that Leni has degrees in economics and law, which, given our situation, gives her the advantage over all candidates. But let’s look at her actual performance: remember when President Duterte appointed her as drug czar, only to fire her 19 days later? Her terminal report to him (she submitted weekly reports, which he never acknowledged) exemplifies her cognitive ability—her capacity to “reason, plan, solve problems, think abstractly, comprehend complex ideas, learn quickly, and learn from experience”—which according to the experts is a strong predictor of job performance in virtually all jobs. Read the report, Reader.

The fact that she sent weekly reports and submitted a terminal report despite her being fired indicates conscientiousness—defined as “a tendency to be organized and dependable, show self-discipline, act dutifully, aim for achievement, and prefer planned rather than spontaneous behavior.” HR experts agree that among personality factors, conscientiousness is the strongest predictor of future job performance.

3. Inspires and motivates. There are doctors for Leni, lawyers for Leni, workers for Leni, farmers, fisherfolk, artists, actors, students, musicians, engineers, economists, professors, market vendors, teachers, housewives, religious, even mountain climbers for Leni—all inspired and motivated by her. Giving freely of their time, talents, and treasure to help in her campaign. And from all indications, their help will not stop with her election, because she has managed to engage their attention and commitment. I joined her April 23 rally, together with mostly senior citizens. Although we couldn’t get anywhere near the main stage (we couldn’t even get near the farthest stage), the energy and the connectivity among the people was palpable. They were offering food to one another, parting miraculously like the Red Sea when someone fainted and needed air and medics. Frankly, I have never seen anything like it. I was inspired. And motivated.

4. Communicates powerfully. Anyone who has watched Leni in the presidential and vice presidential debates she participated in must agree that this is one of her fortes. Her “The last man standing is a woman” statement during the VP debates in 2016 is a classic. One hopes it will resound today as it did six years ago. The latest evidence of her communication skills is her answer to Sen. Juan Ponce Enrile’s Facebook post (which I assume is authentic since there has been no denial): “VP Leni Robredo is billed as a lawyer and economist. May we know what kind of law practice did she perform. Was she a trial lawyer? A corporate lawyer? A tax lawyer? A patent or copyright lawyer?…”

Her reply: “I was a developmental lawyer engaged in public interest cases like defending the land rights of Sumilao farmers… developmental lawyering is ‘the practice of law fundamentally for individuals, communities and sectors that have been historically, culturally, and economically marginalized and disenfranchised’ …but you probably don’t know that because as evident from your post and examples, you only know the big-ticket and money-making law practices… You defend the rich. I defend the poor. We are not the same.” Powerful.

Reader, this is why, as far as I am concerned, the last man standing in the presidential race is a woman. How does your candidate compare? Study the hard evidence. The worst thing is to say: “Basta ang iboboto ko ay si … bigyan natin siya ng pagkakataon.”

The stakes are just too high for that cavalier attitude. Remember: we get the government we deserve.