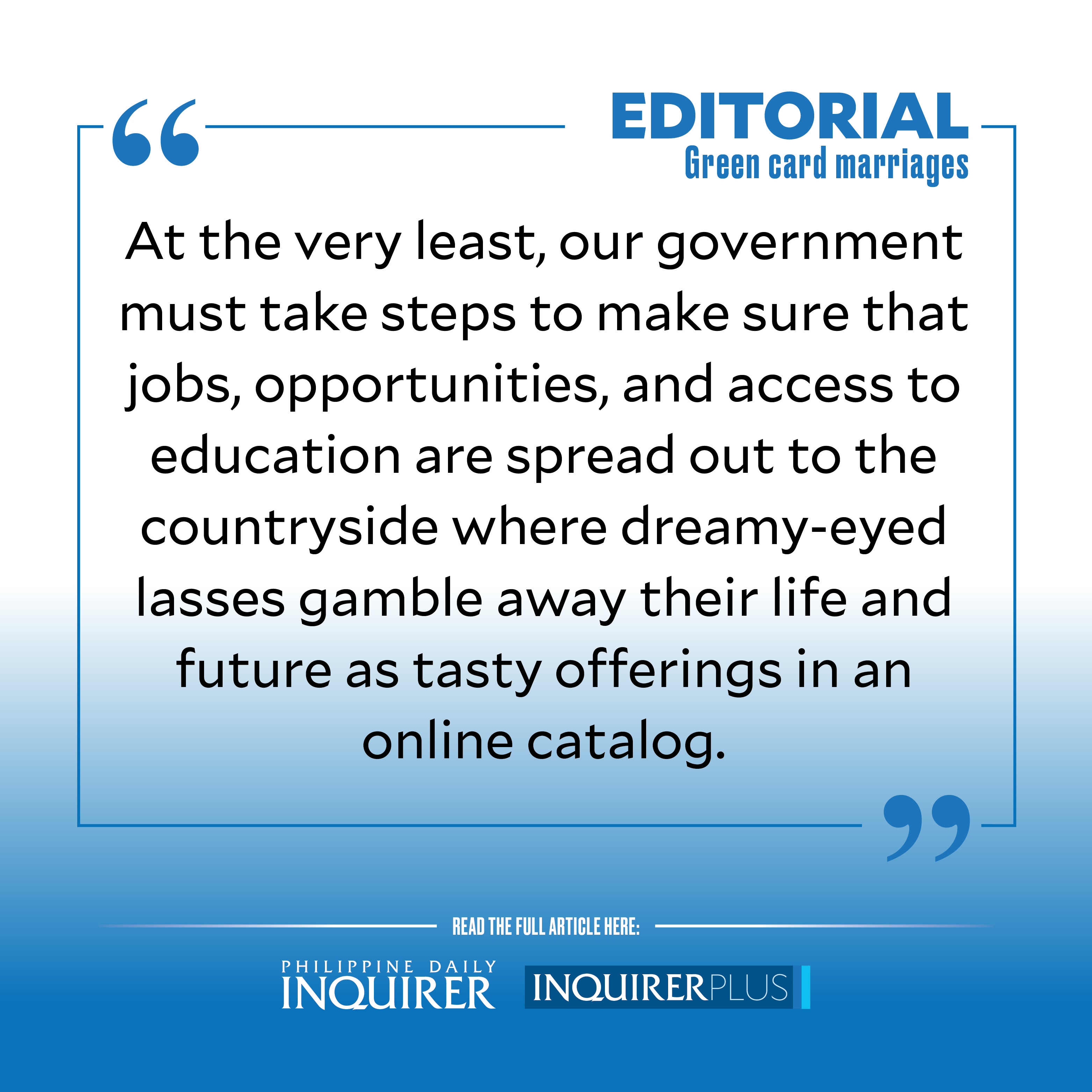 There has always been something unsavory about the term “mail-order bride.” Referring to women who marry foreign men, primarily from the United States or any developed country, the “mail-order” tag stems from the use of third-party arrangements that link the women to the men, often in exchange for a fee and a so-called “green card” or legal immigration document that allows them to stay and work in the US.

In times past, the arranged marriages were undertaken through “brokers” or matchmakers. But these days, the marriages are more commonly arranged through websites where prospective grooms could pick-and-choose among a lineup of aspiring brides, not unlike ordering an appliance online. The women are even described in exotic detail, with emphasis on their “long straight hair, slim and petite body, and supple brown skin.”

Earlier this month “mail-order brides” re-emerged in popular awareness, years after Republic Act No. 6955 or the Mail-Order Bride Law of 1990 declared “unlawful the practice of matching Filipino women for marriage to foreign nationals on a mail-order basis’’ in response to reports about many Filipino women ending up abused by their American husbands.

A report earlier this month said six Filipinos had been indicted in the United States for arranging 400 fake marriages between Filipinos and American citizens. Federal authorities said the six Filipinos and their accomplices have made millions of dollars from arranging the marriages to secure green cards illegally for their clients.

Identified as the ringleader of the group was Marcialito Biol Benitez, 48, who is Filipino and who operated an employment agency in Los Angeles as an alleged front for “arranged sham marriages that charged $20,000 to $30,000 per client.”

Benitez allegedly fielded a team of “brokers” who recruited American citizens willing to marry foreigners in search of the proverbial “green card.” Should the recruited spouse, who is paid an “upfront fee” and monthly payments, prove to be uncooperative in helping secure a green card for the client, it was reported that Benitez’s agency would then accuse the fake spouse of domestic violence. If the court takes the side of the client, she (or he) could apply for legal permanent resident status without their spouses’ involvement.

“These weddings were not love stories,” Massachusetts US Attorney Rachael Rollins commented. “These individuals committed multiple frauds on the United States government with the explicit goal of circumventing immigration laws.”

The scandal ruins the reputation of Filipinos, some of whom have become victims of the anti-Asian hate crimes resulting from the COVID-19 crisis. It also reflects the continuing oppression of women from countries with struggling economies, who are sold like commodities in online catalogs that describe them as ideal wives to men from more affluent countries.

Although operators of the mail-order-bride business contend that their clients and the women in their catalog are consenting adults, critics describe the scheme as a form of human trafficking, with the marriage brokers profiting from the desperation of poor women and the loneliness of divorced, elderly, or socially isolated men. While encouraging women’s fantasies of a better life abroad with a foreign mate, the sites downplay the risks that unrealistic expectations could bring, and the restrictive immigration laws in many countries that trap them in loveless, sometimes violent, marriages. Going to authorities could lead to the women being deported for their complicity.

Worse, they could end up like Susana Remerata who was pregnant when she and her two Filipino companions were shot dead in 1995 by her estranged husband at a courthouse while their annulment was being heard. As the women were packaged as “faithful, submissive, charming, culturally adaptable, family oriented, religious, and willing to do their husbands’ bidding,” Remerata’s husband claimed he was duped and snapped, according to his lawyer.

In the wake of this horrible murder case, proposals were made in the US to regulate this marriage broker business by asking operators to vet prospective grooms for possible past misdemeanor or criminal record, psychological profile, and so on.

Locally, what is government’s response to protect the women from our end? A cursory search of the web would reveal scores of mail-order bride sites, leading one to wonder if RA 6955 has been taken seriously at all. Aren’t these sites unlawful? Why do they continue to exist and flagrantly advertise their trade?

At the very least, our government must take steps to make sure that jobs, opportunities, and access to education are spread out to the countryside where dreamy-eyed lasses gamble away their life and future as tasty offerings in an online catalog.