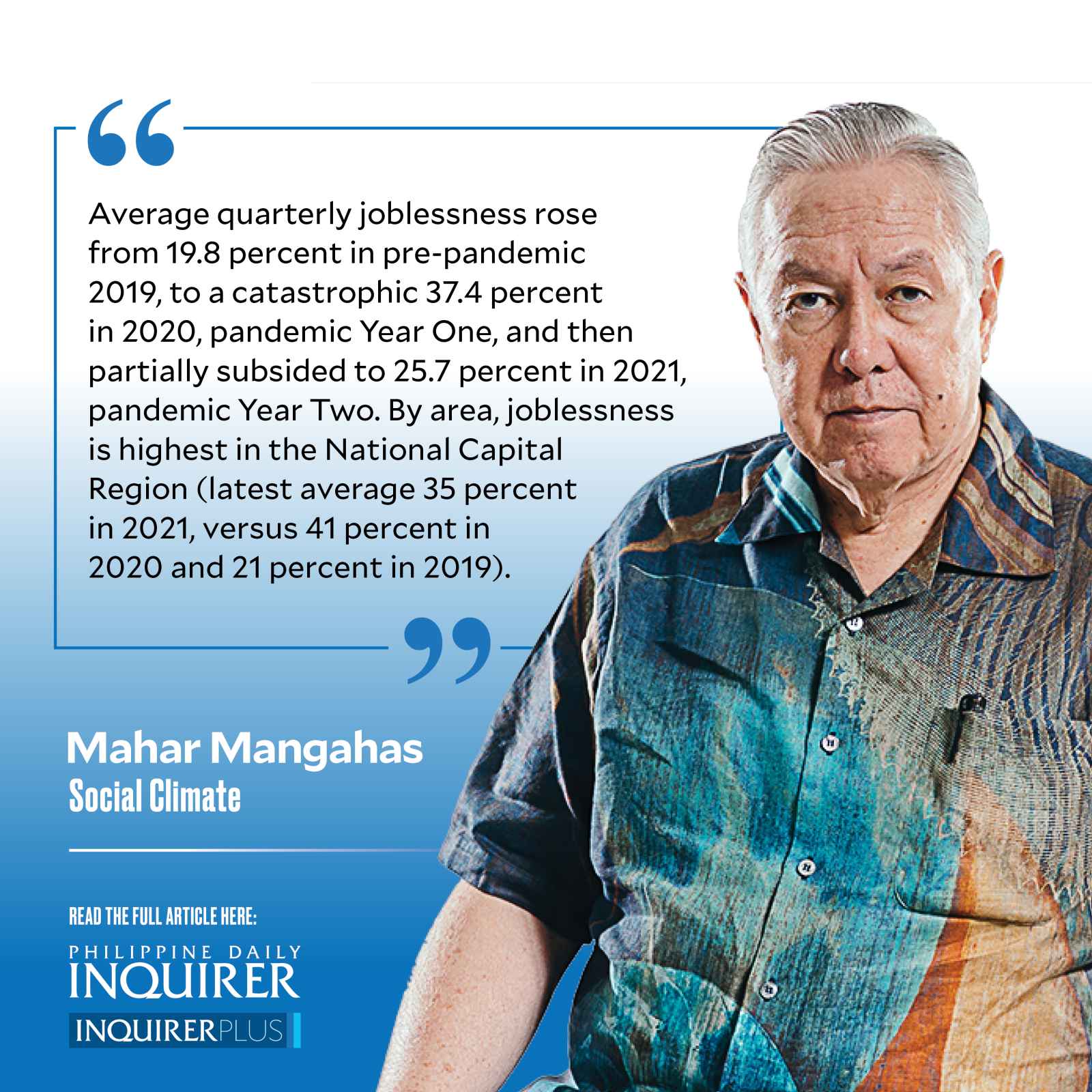 This week’s SWS release—“Fourth Quarter 2021 Social Weather Survey: Adult joblessness at 24.7%,” www.sws.org.ph, 4/28/22—is its 115th joblessness report since 1993, when it became a regular by-product of its quarterly national survey of adults.

The SWS data-series on joblessness started after that on poverty, and before that on hunger (see my Inquirer columns, “132 poverty surveys in 40 years,” 3/26/22, and “95 hunger surveys since 1998,” 4/2/22). At each point in time, these three indicators of economic suffering are based on the same survey respondents. They are correlated with each other, as would be expected. As an economist, I hope SWS will be able to continue measuring them together.

A Social Weather Survey has many topics, corresponding to various dimensions of human well-being, such as perceptions of public safety, victimization by crime, satisfaction with governance, and so forth (see “History by the numbers,” 1/8/22). It is concerned with much more than the popularity of politicians. The multiplicity of topics allows over 50 media releases per year, given SWS’ limited staff.

The SWS archive is now a treasure trove of 711 datasets, 331 of which are national in scope, from 1,084,623 interviews using 128,896 questionnaire items. These are the raw materials from which I hope social scientists will construct statistical models of the dynamics of human well-being, and then test the models’ forecasting capability, just like models of the meteorological weather.

There is nothing sinister about the timing of the SWS media releases. SWS is not a news agency. It is an institute to generate original meaningful data that are alternative and/or supplementary to orthodox government statistics, for the information of the public in general, and the social science community in particular.

SWS appreciates the media companies for helping to disseminate its findings. Its prime role, however, is in continuously gathering fresh data and then preserving them for social scientists in general (and not only for its internal use). Analysis of fresh data is not pro forma or amenable to Artificial Intelligence.

There was a time, in its first decade, when SWS would hold a symposium to present a comprehensive report of the “social weather.” The report took much time after the fieldwork to write, and some hours to present, after which the media participants would just select a few items considered “newsworthy.” Experience taught us that writing up and releasing one topic at a time is more effective.

What comes next? The SWS agenda since 1986 is on record; it has been fairly comprehensive. Its future is up to its current people, who have not changed, except that I have been kicked upstairs.