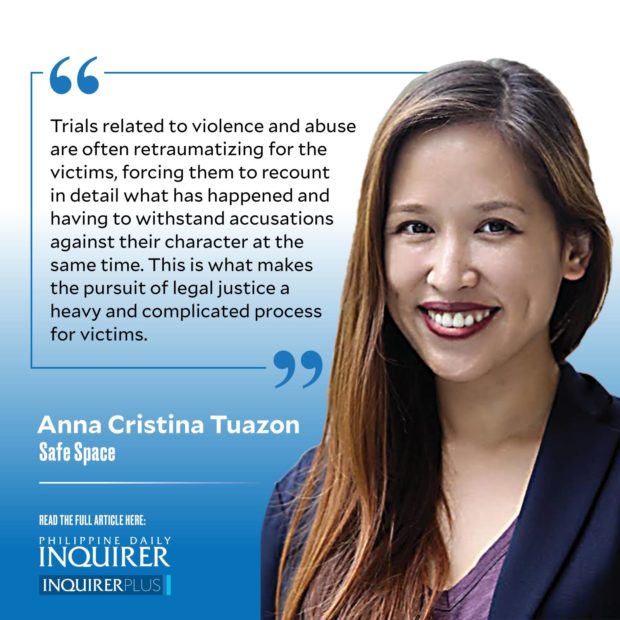 Over the past week, Johnny Depp’s defamation lawsuit against ex-wife Amber Heard has allowed the public to get a glimpse of what it is like trying to prove (or disprove) intimate partner violence (IPV) in court. In a recorded conversation presented as evidence, Amber was heard taunting him, “Tell the world, Johnny, tell them, Johnny Depp — I, Johnny Depp, a man, I’m a victim too of domestic violence” and challenging him to “see how many people believe or side with you.”

I’ve written a few times about intimate partner violence in this column based on cases where the victims were women. Johnny’s case illustrates how IPV also happens toward men and how our gender expectations can make it much harder for men to come out as IPV survivors. Moreover, his cross-examination reveals the nasty side of pursuing justice — the victims are, by default, subjected to shame and humiliation in the opposing lawyers’ attempts to discredit their testimony. His drug and alcohol history was repeatedly brought up throughout the trial. At one point, Johnny was even forced to listen to an audio recording of his attempt to hurt himself. Trials related to violence and abuse are often retraumatizing for the victims, forcing them to recount in detail what has happened and having to withstand accusations against their character at the same time. This is what makes the pursuit of legal justice a heavy and complicated process for victims.

While observing the defense lawyers’ cross-examination of Johnny, I noticed some disturbing misassumptions about mental health. First, one of their main arguments was that he was likely to have been violent toward others due to his drug and alcohol use, thereby proving Amber’s accusation that Johnny was abusive toward her. This is not only a myth, but a harmful one as well. Individuals who suffer from drug and alcohol dependency face a significant amount of stigma in our society. Instead of seeing this as a health issue, we instead treat it as an indictment against their character. We judge people with substance dependence as people with little worth (as our own president casually admits to having them killed, seemingly without impunity). In Johnny’s case, the opposing lawyers argue that since he has a longstanding history of drug and alcohol dependence, surely he must’ve been violent toward others as well. I don’t know much about legal arguments, but as a clinical or diagnostic argument, this would have been an unethical statement for any psychologist or psychiatrist to make. Violence and abuse are proven through behaviors, not through diagnosis or character.

The other concerning argument that the opposing lawyers made was that Johnny’s history of self-harm meant that he was likely to harm others. There is no correlation between the tendency for self-harm and the tendency to harm others. Self-harm is usually seen as a cry for help or, at the very least, that the current emotional experience is so unbearable that they would rather distract with physical pain. Some also engage in self-harm as a manifestation of self-hatred and low self-worth. People who engage in self-harming behaviors need safe and supportive environments, not accusations of violence. This argument also reminded me of a US case that went viral recently about a man who successfully sued his company for firing him due to panic attacks, which were triggered by a surprise office birthday party that the man specifically asked them not to hold. The company’s defense was that they viewed his panic attack as a sign that he was a safety risk for other people in the building. They had wrongly assumed that since he was having mental health problems, he was automatically at risk for violence toward others. Instead of agreeing to reasonable accommodations for their employee (all he wanted was for them not to give him a birthday party!), they instead fired him for making others uncomfortable with his panic attacks. Going back to Johnny’s case, the opposing lawyers exposed his mental health issues as a way of attacking his character and credibility. As a psychologist, I instead saw a man who was suffering so greatly that he would choose to hurt himself (and saw a wife who would rather record him than help him).

What Johnny has chosen to do, in trying to show the world his narrative, is nothing else but brave. For years, he had been accused of perpetrating physical violence against his wife that led to irreparable damage to his career and, in his own words, “wrecked” his family. It is not easy to fight for your truth when the world has already judged you. It is also incredibly hard for men in our society to come out as victims of intimate partner violence. I hope that his case deepens our understanding of what victims have to go through to prove their truth.