Votes and vaccines: Our values on the line | Inquirer Opinion
Close
menu
search

Votes and vaccines: Our values on the line 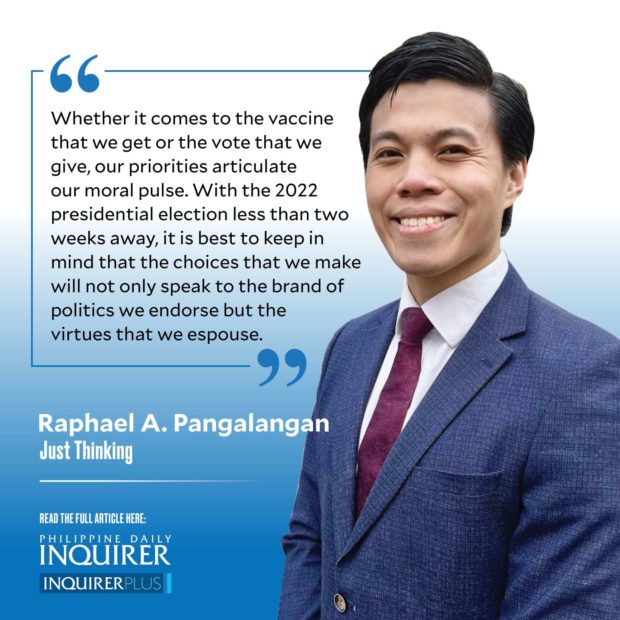 The election of President Duterte birthed terms like “Duterte’s Diehard Supporters” (DDS), “Dutertard,” and “Bobotante” from his critics. Not even a thousand acronymizations, portmanteaux, and euphemisms could mask the intellectual elitism that continues to reek the anti-Dutertian stance.

In the defense of the so-called “Dutertard,” electing Mr. Duterte was no dumb-witted decision. After all, there is no answer key against which to compare our political preferences. No one gets an A+ or a D- for casting their vote. The rightness or wrongness of our electoral exercise—in an epistemological sense—may be questioned and only rarely concluded.

Yet in labeling Mr. Duterte supporters as “stupid” and “unintellectual,” the so-called “Yellowtard” adopted the yardstick of intelligence to disparage their political opposers. In so doing, they missed the opportunity to highlight that the most troubling aspect of Mr. Duterte’s election was not empirical but ethical. In 2016, the Filipino people bolted to the ballots and, with eyes wide open, elected a self-professed murderer to the highest seat of the land.

It may often escape us how our politics and our ethics are tightly entwined. While Mr. Duterte may not have been a measurably wrong choice, that is not to say he was the morally right one. After all, the man ran on a law-and-order campaign promise to fatten the fish of Manila Bay with the corpses of criminals! If that says a lot about him, then casting our vote in his favor must have said a lot more about us.

When a plurality of the votes were made in his favor, the Filipino people sent a message loud and clear: That the majority interest outweighed the individual right, that results mattered more than rules, and that the end justified the means. To the philosophically minded, it was clear that the Filipino voter endorsed an age-old philosophy that, for all its flaws, has withstood the test of time.

Otherwise known as the “principle of utility” or the “felicity principle,” utilitarianism is a moral philosophy that is best summed up by the Benthamian phrase: “the greatest happiness of the greatest number.” Like Mr. Duterte, Jeremy Bentham would not bother with the constitutionally protected right to life. In fact, why care about human rights at all? In his words, they are but “nonsense on stilts!”

To the Dutertian and the utilitarian alike, the rights to life, liberty, and property of one are ultimately outweighed by the interest of the many. And to 16,601,997 voters in the 2016 elections, that philosophy rang true.

Support for Mr. Duterte’s “drug war” is, thus, a quintessential example of utilitarian philosophy made manifest in law. But the interplay of law and morality neither begins nor ends there. The past two years of pandemic life have also been a matter of both public health and public morals.

Early into COVID-19, the world was encouraged to wear face masks to protect oneself. Yet, over time, the language evolved from individualist to communitarian. In August 2021, Pope Francis himself appealed for people to get vaccinated out of love for oneself and one’s neighbor. Love, he says, “is also social and political.” Getting vaccinated, therefore, is a matter of “moral obligation.”

Even vaccine priorities are defined by ethical lines. The departments of health from around the globe prioritize health care workers because “[t]heir health helps preserve the health of others”—again, an archetypal utilitarian (and true!) justification.

Interestingly, the Philippine Department of Health further reasoned that health care workers should be prioritized, not solely in order for them to contribute to society, but in light of their sacrifices for the health and well-being of the community. Echoing a theory of Aristotelian virtue ethics and “just desserts,” vaccine resources are, therefore, allocated to health care workers in the Philippines not simply because it is desired, but because it is deserved.

Whether it comes to the vaccine that we get or the vote that we give, our priorities articulate our moral pulse. With the 2022 presidential election less than two weeks away, it is best to keep in mind that the choices that we make will not only speak to the brand of politics we endorse but the virtues that we espouse.