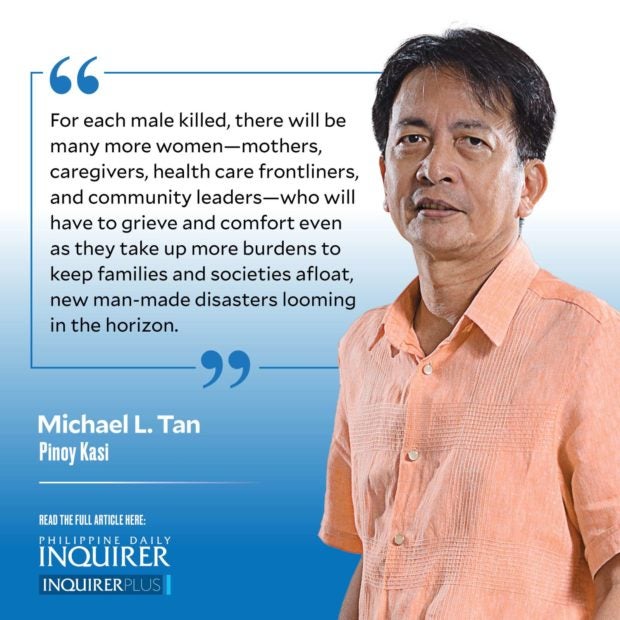 Last semester, at a human science college I’m now running, I instituted a course called “Climate Justice and Gender Equity,” looking at how the climate emergency has more adverse effects on women than on men.

Formulating the course and listening to my fellow faculty in the teaching team has made me alert to getting information about the inequities. Just yesterday, I got some data that was so disturbing: An article in The Economist’s climate newsletter (3/21/22) said there were 40 percent more females who died than males in Tacloban City due to Supertyphoon “Yolanda” (international name: Haiyan) in 2013. Another report, from the Asia Pacific Forum on Women, Law and Development, said that of the 6,300 total deaths in Samar and Leyte, 64 percent were female.

Across all human societies, females live longer than males. It seems nature “favors” females, ensuring greater chances of survival through physical (e.g., more fat reserves in the body), as well as physiological advantages, with the “female” hormone estrogen playing an important role. (The quotation marks are there because men do produce estrogen, too, but at far lower levels than women.) Besides regulating reproduction, estrogen has a protective antioxidant role, ensuring healthy cell function.

But why this favoritism?

In a Time article in 2019, neuropsychiatrist Dr. Perminder Sachdev of the University of New South Wales in Australia, brutally comments: “Once children are born, men are disposable. But the robust body of the mother is important for the survival of the offspring” (read humanity).

Among humans, higher male mortality comes from social behavior as well, men tending to have unhealthier lifestyles—eating too much, drinking too much, not adhering to medical advice, and engaging more in risky activities from smoking to getting into fights … and wars.

We know of the terrible toll of war, more men sent off to kill and be killed, but the women left behind face risks too as they defend home and hearth, caring for the elderly, the children, the disabled.

We see how the natural advantage women have over men can be so easily upset by “man-made” factors in disasters, whether “natural” or “human.”

Let’s return to The Economist article, which notes that in many Asian cultures, women are not taught to swim and are therefore less likely to survive a flood or storm surge.

I agree with that observation, having seen students, including those who live in coastal areas or by riverbanks, who have never been taught how to swim. The rural poor seem less likely to get swimming lessons. That includes males, but females are even less likely to be taught for several reasons, including male chauvinist norms, from beliefs that women shouldn’t even go out to the sea because they bring misfortune to fishing vessels, to our puritan standards about women in bathing suits, notwithstanding all those beauty pageants.

Other reports on gender inequity and disasters note that women will sacrifice themselves, in favor of husbands and sons, for scarce food supplies. Another aspect of gender inequity is the relief centers being perceived as unfriendly for women, where they are more prone to sexual harassment and even rape. The deterrent measures are simple: provide separate facilities for women and girls only, the entire residential spaces if possible and, if not, at least some of the toilets.

The climate emergency (the preferred term now, rather than just climate change or climate warming, with other media outlets now even using “climate catastrophe”) will mean many more “natural” disasters. This makes it more urgent to find ways to mitigate the disasters’ impact, including being aware of the disadvantages faced by women and girls, even for something that seems to be as trivial as swimming lessons.

As for the truly man-made disasters like war, let’s think again about which men create the disasters. All too often, the men sent out to the frontlines as cannon fodder do so unwillingly deployed by their largely male war freak leaders, far away from harm’s way.

For each male killed, there will be many more women — mothers, caregivers, health care frontliners, and community leaders — who will have to grieve and comfort even as they take up more burdens to keep families and societies afloat, new man-made disasters looming in the horizon.