How to engage in dialogue and discernment | Inquirer Opinion

How to engage in dialogue and discernment 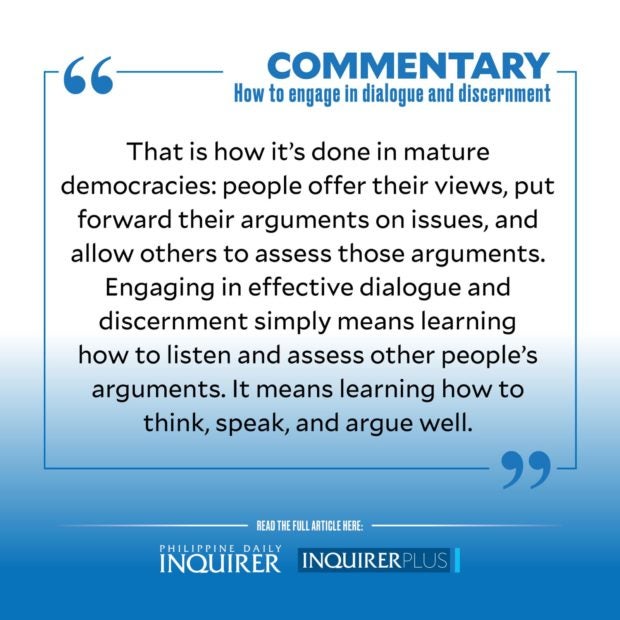 One of the things that the Catholic Bishops’ Conference of the Philippines highlighted in their pastoral letter, “The Truth Will Set You Free,” is the importance of common dialogue and discernment in the search for truth. It’s a much-needed reminder for us today. Our political discussions on social media have become antagonistic and polarizing in recent years, especially now that another presidential election is right around the corner. In addition to the problem of fake news, there seems to be a lot of toxicity in our discourses online, as evidenced by trolls, meme wars, and ad hominem attacks on candidates and their supporters. In short, a lot of heat generated but not a lot of light shed on issues.

As Christians, we should aim to shed light instead of igniting fights. As the pastoral letter suggested, we should search for truth and respect one another and not give in to hate.

So how do we effectively engage in common dialogue and discernment with others?

We must begin with prayer. Before we engage in political discussion with anyone we disagree with, we must keep in mind that we are speaking with a person. Every person deserves respect. Prayer will help us focus on what’s important, and that is treating others with charity and respect.

We must then listen. Our goal is not to antagonize, but to understand. Of course, we’d also like to persuade, but we must first genuinely listen to what people are saying, instead of automatically contradicting them.

Then, we must understand what they’re trying to say. Are they putting forward an argument or simply expressing a personal preference? If it’s the latter, then no one can argue with that because it’s something subjective to them. When a person says, “I like Candidate X just because,” that’s subjectively and relatively true for that person. It’s not a claim about something objective.

But if they’re putting forth an argument, then that’s a different matter. An argument is simply a claim backed by reason. In logic, an argument is a technical term for a set of statements, one of which is the conclusion, and the rest the premises given in support of that conclusion. If the person you’re chatting with provides reasons for his claim, then he is offering you an argument. He is trying to persuade you that something is objectively true. When someone says “Candidate X is competent, has a good character, and has a great platform for governance. Therefore, he is the best choice for president,” he is giving you an argument. Of course, we should assess those premises and see whether they are true, but it’s important first and foremost to figure out whether the person is making an argument or not, so we’d know how best to respond.

Once we know that they’re making an argument, the next step is to evaluate the premises and see if they’re true or not. Are the premises supported by facts? And does the conclusion follow logically from those premises? If the premises are false, or if the conclusion does not follow logically from them, then the argument is not good. If we don’t have good arguments for believing something, then clearly we shouldn’t believe it. Or if we don’t have good arguments for doing something, like voting for a particular candidate, then clearly we shouldn’t do it. It doesn’t make sense to believe something we have no good reason to believe, or to do something we have no good reason for doing. In our dialogue, we must charitably point out if there are errors in the person’s argument.

After assessing their argument, we may then offer our own. For example, we may argue, “Candidate Y is competent, has a good character, and has a great platform for governance. Therefore, she is the best choice for president.” We may then show why we think that argument is good.

That is how it’s done in mature democracies: people offer their views, put forward their arguments on issues, and allow others to assess those arguments. Engaging in effective dialogue and discernment simply means learning how to listen and assess other people’s arguments. It means learning how to think, speak, and argue well. When founded on prayer and charity, our political discourses can bring us closer to the truth.

Dante Cuales Jr. is a writer and works for a San Francisco-based startup. He lives in Cebu with his wife, Bel, and kids, Luke and Lizzy.