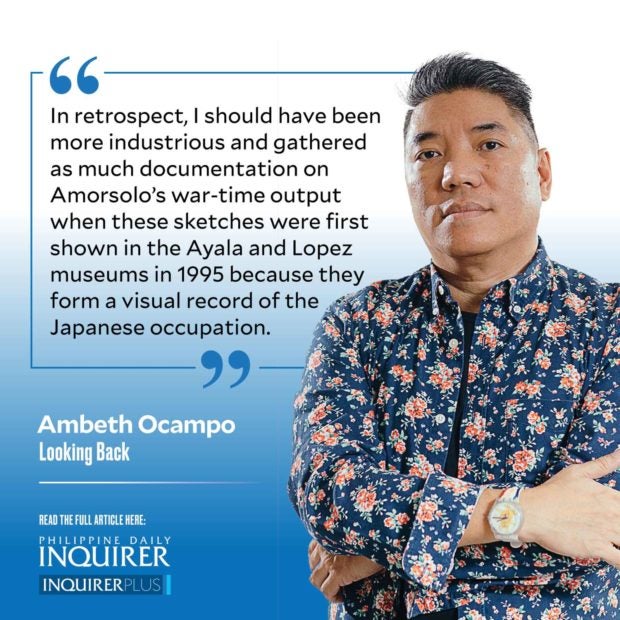 Fernando Amorsolo is associated with cheerful sun-lit canvasses of sensuous maidens set in bountiful rice fields or under blooming mango trees. Amorsolo pastoral paintings command seven to eight figures at auction, not because they are rare (there are at least half a dozen in every auction) or exceptionally executed (some are postwar potboilers from his twilight); these cost a fortune because of nostalgia. They remind us of a world that is no more. An Amorsolo painting, even a reproduction, transports us back to the innocence of the prewar Philippines, a time our grandparents knew as “pistaym” (peace time).

It was a revelation to encounter Amorsolo’s dark side in the National Library four decades ago. The Filipiniana section had a canvas with a woman, carrying a child, fleeing from a burning city. The director’s office had a depiction of the Legislative Building in ruins after the 1945 Battle for Manila. The restored building today houses the National Museum of Fine Arts. I wouldn’t use these to cheer up my living room. A friend has walls ornamented with small oils by Amorsolo, one comes with a brass plate that gives its title as: “Manila destruido por los salvajes japoneses.” (Manila destroyed by the savage Japanese.) Amorsolo’s works from this period are justifiably anti-Japanese.

Sometime in December 1941, Amorsolo sketched a Filipino being frisked at a Japanese checkpoint. The title makes clear this was “holdap” not a random check: “MANDURUKUT GREATER EAST ASIA.” Elsewhere, he scribbled a description of the Japanese soldier best left in the original languages: “El hijo de puta, canalla, kupal, etc…!” In another sketch depicting prisoners passing through Quezon Boulevard led by a Japanese officer on horseback, he noted “Mas guapo el caballo que el caballero.” (The horse is more handsome than the rider.) In retrospect, I should have been more industrious and gathered as much documentation on Amorsolo’s war-time output when these sketches were first shown in the Ayala and Lopez museums in 1995 because they form a visual record of the Japanese occupation. His random notes on the end of the war in Manila, translated from the original Spanish, reads:

“February 3, 1945 p.m. … I positioned furniture over furniture like a barricade on the window and I write and make this rough sketch from here. [He lived alone in a studio along Azcarraga, now Recto avenue, his family kept in safety elsewhere.] A fresh breeze blows in the scene of combat with this infernal noise … the bullets pass before me … I am alone in my house and my family is in the other [house along Maria Carpena street near Raon]. I make signs from the window so that they can see me. Still, I wonder?

“The hoorays and shouts of joy with applause can be heard very clearly from [the University of] Santo Tomas [internment camp]. One manly voice stands out shouting: ‘Take it easy … take it easy.’ I saw a clear reflection of fire coming from the back of the house. I ran out of the house and saw the house of Ocampo encircled by flames [he drew the smoke on the Ocampo Pagoda in Quiapo] after half an hour of fire in front of my house, there is a terrible explosion and spread of fire. Four Japanese soldiers crawled, on all fours, until the site of the fire in the direction of Far Eastern [University] but they turned and proceed until here after crossing Azcarraga they ran toward the boulevard, I see two after a while turning until the blazing fire.

“February 5, 1945. I am alone in the house without sleep. Que puñeta, how can one sleep with this infernal noise? … Maring [the painter’s wife] desires to see the American invaders of Manila. Everything is late. I do not know. I will wait to see another passing tank. Meanwhile some looting occurred in the neighboring house … [the family] returned to the other house against my wishes and some minutes later a parade of tanks and motorcycles appeared with hundreds of soldiers marching with their arms, on both sides of Azcarraga up to Lepanto. The crowd that gathered cheered deliriously, receiving the smiles of the victors and they had passed … to Quezon Boulevard. All my children came. They were happy at their presence except Maring who remained in the other house because she [had] to accompany Sylvia who was down with fever. Until 5.30 the shooting, until Far Eastern. The fright is quite phenomenal.”

Surely there is more material to revisit Amorsolo: the painter as historian.