Life is not binary 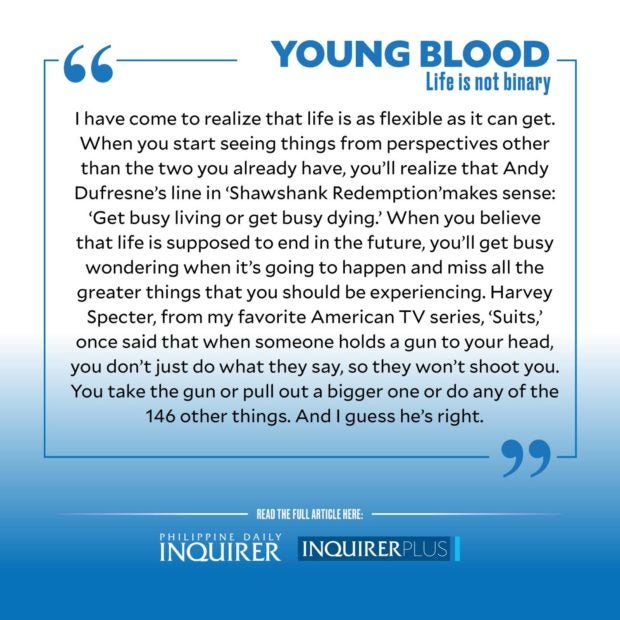 When someone puts a gun to my head, I would just do what they say and not get shot rather than fight back and let them pull the trigger. That’s because I believed that life is binary. We always have only two options in every situation. There’s no taking the gun away. There’s no pulling out a bigger one. Not until I realized that in life, there is.

Growing up, I was made to believe that life only gets better if you study hard. It’s either you get good grades or you fail. And if you want to be on the better side of the grading system, you’ll study hard. If you don’t, well then you don’t. At home, there was no playing games or watching cartoons. It’s either you read your book in peace or you read it with a belt buckle mark on your palms. I was always at the top of my class; never the second, always the first. If I didn’t, I might as well not be in the top 10. There was no room for me to be like the kids my age because, even if failing was not completely out of the equation, it was made clear to me that I was not supposed to choose that option.

And so my life became simple, black and white. Either you follow the rules and are rewarded, or break them and are punished. Either you do things on time and do not miss the deadline, or you slack off and run out of time to accomplish anything. For years, I have made it clear to myself that there are only two options for me: succeed or fail. Everything that I did, I made sure that I would only end up on the better side of things because there was no other superior option for me but to succeed. I lived in a fantasy that life is defined in certain ways that are gauged through metrics and boundaries that are easy to grasp and maneuver.

As I grew older, the binary system that had been instilled in me jeopardized many things in my life, especially the relationships that I was able to build over the years. I was brainwashed into believing that people can only be friends or foes. The importance of the people I have been with has been diminished to just having someone that I can get along with or someone whose existence I should forget. It was not an option for me to value any memory that I have made with people because, in my head, it’s either they stay and are forever remembered, or they leave and perpetually perish from my reminiscences. Every person that I encountered was just a story that turned out in two particular ways.

But I got tired of it.

It felt like a dead-end to me. I felt like a fish put in a bowl where I could only grow a certain number of centimeters. Life became a pattern of ending and beginning, staying and leaving, remembering and forgetting, being good and being bad, being strong and being weak, being right and being wrong. I realized that in between the series of binary choices that I have, there are a whole lot of other options for me. It was a whole other dimension where other colors existed, not just the black and white that I got used to.

I have got to embrace the new revelation that life isn’t supposed to be certain. I felt free from my own understanding of what life is presumed to be. Life has become more interesting knowing that it isn’t just about getting good grades or getting failing grades. It’s also about knowing your seatmate and telling each other silly stories about your pet fish or lovebirds, eating your lunch together, playing games, and watching cartoons after class. It’s not just about making friends with people to have companionship, but also about making memories with them so that you’ll have something to remember, someone to remember, and become someone to be remembered. Life is not just about accepting that people come and go, but also knowing that no matter how long or short their stay is in our lives, they have made a difference.

I have come to realize that life is as flexible as it can get. When you start seeing things from perspectives other than the two you already have, you’ll realize that Andy Dufresne’s line in “Shawshank Redemption” makes sense: “Get busy living or get busy dying.” When you believe that life is supposed to end in the future, you’ll get busy wondering when it’s going to happen and miss all the greater things that you should be experiencing.

Harvey Specter, from my favorite American TV series, “Suits,” once said that when someone holds a gun to your head, you don’t just do what they say, so they won’t shoot you. You take the gun or pull out a bigger one or do any of the 146 other things. And I guess he’s right.

Jade Nool, 23, is a film enthusiast who’s currently busy living. Aside from her corporate job, she spends most of her time reading and watching films and television series.