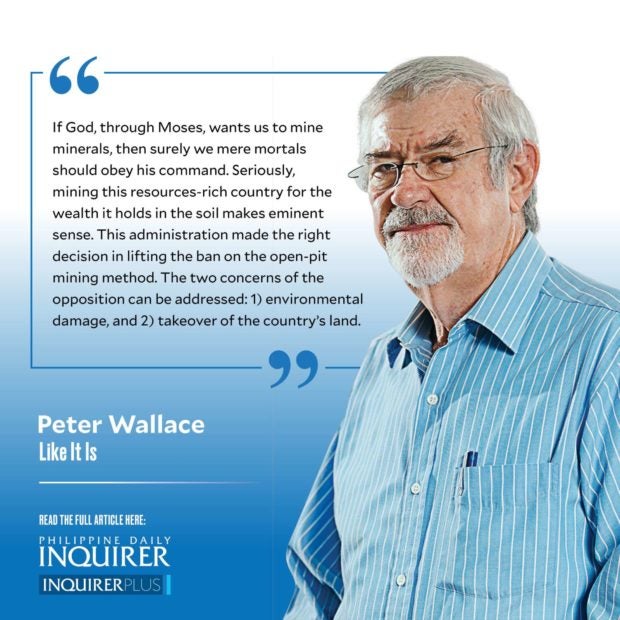 For the LORD your God is bringing you into a good land, a land of brooks of water, of fountains and springs, flowing out in the valleys and hills, a land of wheat and barley, of vines and fig trees and pomegranates, a land of olive trees and honey, a land in which you will eat bread without scarcity, in which you will lack nothing, a land whose stones are iron, and out of whose hills you can dig copper.” (Deuteronomy 8:7-9)

If God, through Moses, wants us to mine minerals, then surely we mere mortals should obey his command. Seriously, mining this resources-rich country for the wealth it holds in the soil makes eminent sense. This administration made the right decision in lifting the ban on the open-pit mining method. The two concerns of the opposition can be addressed: 1) environmental damage, and 2) takeover of the country’s land.

On the first, it just needs firm, strict control by both the national and local governments. But as we know that won’t happen without pressure. We, the public, must exert that pressure. If the government only licenses reputable companies (I suggest with an international partner who has an international reputation to protect), the risk is much reduced. If the opposition takes an active stance, any misdemeanors can be brought to attention early on.

I will not argue with anyone who opposes mining carte blanche, yet uses mined products. They are not credible, they can’t be against something they use themselves. And they can’t say: “Do it somewhere else.” That’s about as unchristian as you can get.

Today’s modern world cannot exist without metals (or cement and other quarried products) and the people who oppose mining live in this modern world. If they are to be true to themselves and their ideals — of stopping mining — then they must stop using mined products. Join the Luddites, throw away their cellphone.

The modern world is totally dependent on mined products. So we can’t stop it. What we can do and should do is see to it that the least possible damage to the environment is done. And that the land is restored once the mine is finished.

This is called “responsible mining.” And part of that responsibility includes sustainable development. The Church, which currently wishes to ban mining, could instead be a most effective force in ensuring that mining is done responsibly rather than being a negative force trying to stop something they use themselves. Responsible mining means not only minimal damage to the environment but also the development of the local community—creating jobs and building schools and hospitals, roads, and bridges. And developing alternative income sources for when the mine finishes. That’s sustainable development, introducing into the local community business activities that can go on beyond the life of the mine.

A mine has a limited life. At the end of the contract, our current mining law and regulations require both progressive and final mine rehabilitation, where mined out areas need to be brought back to environmentally desirable condition: Grow a forest, create a lake, etc.

As to grabbing the country’s land, the Mines and Geosciences Bureau (MGB) said 30 percent of the country’s total land area (9 million hectares out of 30 million) has been identified as having high mineral potential. From these areas that are prime farmlands, or residential can be excluded, as can forests and other protected areas. There’ll still be enough land left to mine.

The fast-growing demand information technology is putting on some of the more abundant minerals we have such as nickel, gold, and copper make the success of any venture almost a given. That will redound to the benefit of us all in jobs created and families looked after and in construction of local infrastructure.

According to the MGB, the lifting of the ban on open-pit mining will result in additional revenues to the government through the taxes and royalties generated that are estimated to reach as much as P80 billion. It can help reduce the humongous debt government has incurred from the COVID-19 relief. The government, which redounds to us, needs the money.

It would make it even more attractive if the government sits down with the industry and works out what is needed to refine ore into metal here. Greatly increasing its export value. Not by mandate, something that never works, but by attraction. Making it financially attractive to do it, with incentives. With the looming high demand, local processing should be commercially viable.

Mining benefits us all.