The Pope, parenting, and pets 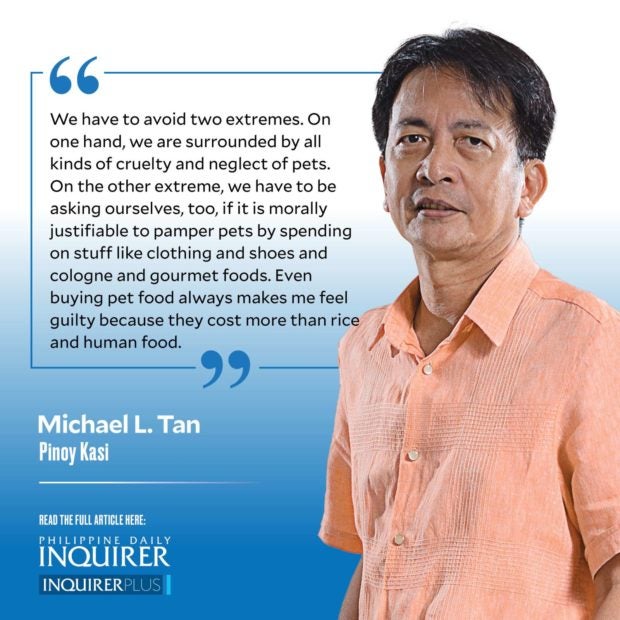 A few of my friends, including devout Catholics, were not too happy reading news articles quoting Pope Francis as saying that people who choose pets over children are being selfish.

The way media quoted the Pope it seemed almost as if he had devoted an entire speech to pets and selfishness when in fact it was one passing paragraph in a speech meant to encourage adoption of children and where he worries about people choosing to be childless, or having just one child, even as they have two dogs and two cats.

The speech was made on Jan. 5, during his weekly Wednesday public audience in Rome and interested readers can look it up in americamagazine.org, the title being “Pope Francis: Adoption is among the highest forms of love.” With a new law in the Philippines which simplifies the adoption process, the Pope’s promotion of adoption would have been timely. Instead we read all kinds of criticism associating pets with selfishness.

A less emotional reaction appeared in the National Catholic Reporter entitled “6 Questions for Pope Francis, who may benefit from adopting a pet,” written by Lisa Fullam, who is a theologian and a veterinarian, and which inspired me to work on today’s column, as a veterinarian but not a theologian.

Let me summarize the rhetorical questions posed by Fullam, which she herself answers.

Ecological issues are important for Fullam as she asks, what’s wrong about having just one child, in this era of a climate catastrophe and dwindling resources?

The climate emergency has made biodiversity all the more important and Fullam quotes the 2015 encyclical Laudato Si, “Each organism as a creature of God is good and admirable in itself” and that should definitely include animals. I thought of Tom Holland, the latest Spider-Man star who is endearing himself to fans with his candor. The latest? He talked about his solution to a shortage of eggs in London’s supermarket, which was to take home three live laying chickens!

Fullam argues against having to make people choose between children and pets: “Loving and caring for animals can inspire people to love and care for humans, and vice versa.”

Fullam targets a particular statement from the Pope that not raising children “diminishes us, takes away our humanity.” If that is the case, Fullam argues, then why does the Pope tolerate opposition to adopt by LGBT people? And if parenthood provides “something fundamental, something important” in people’s lives, then “celibacy should not be required for those who serve the church.”

Finally, the warnings about a demographic winter and of the childless spending old age in solitude. Fullam rightly points out this risk is not just for childless seniors but those who outlive their partners, their friends, even their own children. Especially relevant for the Philippines, Fullam notes how seniors’ loneliness comes about as well with families scattered across a continent. I thought, for Filipinos, it’s families scattered across the world. Fullam’s point is that in such circumstances, nonhuman companions help in allaying loneliness.

If I might play the devil’s advocate here, or rather a Pope’s advocate, I did want to remind readers that after a 2015 trip to Asia, including the Philippines, he pushed for “responsible parenthood” and observing, “Some think that … in order to be good Catholics we have to be like rabbits. No.”

Taking off from responsible parenthood, I would push, too, for another moral issue and this is responsible pet companionship (I don’t like the term ownership).

We have to avoid two extremes. On one hand, we are surrounded by all kinds of cruelty and neglect of pets. On the other extreme, we have to be asking ourselves, too, if it is morally justifiable to pamper pets by spending on stuff like clothing and shoes and cologne and gourmet foods. Even buying pet food always makes me feel guilty because they cost more than rice and human food.

Dogs and cats are happiest stark naked, allowed to roam the house rather than being chained to a post. They need to be provided decent but not luxurious food and water, veterinary care (yes, vaccines and family planning, too!), and lots of love.