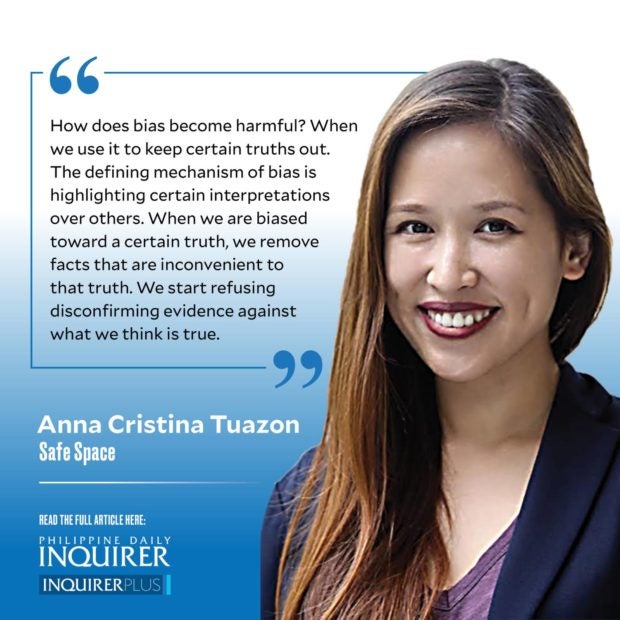 Presidential candidate Ferdinand Marcos Jr. claimed that he refused to participate in the Jessica Soho Presidential Interviews due to the journalist being biased because she is “anti-Marcos.” But what about “pro-Marcos” personalities and bloggers that interviewed him? Weren’t they biased, too, but in his favor?

Bias is a tricky notion and something that is often misused. A bias, defined by the American Psychological Association, is an inclination or predisposition for or against something or someone. This bias may be due to prior experience or knowledge; often it is due to stereotype and prejudice. A bias is ultimately simplified thinking and relying on it too much will lead to mistakes in judgment.

Strictly speaking, every person has biases. Our experiences shape what we view as harmful or helpful. When we have an unpleasant experience with someone, we are less likely to want to give that person another chance. Conversely, when we feel that we (or our community) have benefited from that person, we are more likely to look at them favorably. More than just our personal experience, the social and cultural structures and systems we live in also influence our biases. The candidates’ stance on divorce and same-sex marriage, for example, belies their religious upbringing (and the religious bias of our country in general). The tendency to see leaders as “fathers” or “mothers” of our country comes from our family-orientedness. This can be both helpful and harmful: invoking a sense of family should ideally invoke a sense of “malasakit” and community and at the same time lead to infantilizing constituents, hence statements like “Filipinos need discipline” and “Filipinos need to be educated.” No one is exempt from having biases. It is what they do with it that matters.

In psychotherapy, we train therapists to be aware of their biases and how to keep them from unduly influencing their understanding and treatment of their clients. This is basic professional ethics. Someone who doesn’t recognize their biases is doomed to be dictated by them in the same way that someone who doesn’t recognize their own privilege is fated to use it against others.

How does bias become harmful? When we use it to keep certain truths out. The defining mechanism of bias is highlighting certain interpretations over others. When we are biased toward a certain truth, we remove facts that are inconvenient to that truth. We start refusing disconfirming evidence against what we think is true. When an interviewer is careful to avoid topics that will make the candidate look good or bad, that is bias. When a researcher discards facts that don’t fit into their hoped-for results, that is bias. When we insist that certain sectors of society are “pasaway” and need to be disciplined, that is bias (and faulty generalization). When you ascribe malice to media organizations simply for reporting facts that you don’t like or asking questions that expose a truth you would rather hide, that is bias.

It was honestly in his best interest (and self-preservation) to sit out an interview full of tough questions. This was the strategy of Trump and Duterte—to keep non-favorable press out—and look where it got them. What may be for the best interest of one individual, however, may not be for the best interest of the nation. He saved his narrative from scrutiny but lost the opportunity to show himself to all Filipinos—even those who are “biased” against him. When someone is applying for the highest position in the land, we expect to be able to ask our questions and get some answers. Otherwise, voters are left with only their biases to base their votes on (which may be what he wants). The winning candidate does not only become the president of their supporters but the president of all Filipinos. A president cannot pick and choose the issues and problems they will tackle. They cannot choose to only listen to flattery and praise. Especially as the next president will be dealing with a nation fatigued from a years-long pandemic, can we really afford someone who refuses to be open to scrutiny?

By refusing to answer questions and thus withholding information, we are actually increasing the power of bias to determine the outcome of the election—and the fate of our country. By limiting media platforms, such as only releasing certain information to supposedly “favorable” outlets, we are promoting further bias and polarization. Let’s develop an appetite for tough questions and tough conversations with people who have dissimilar biases from us. This is how we grow as a nation.