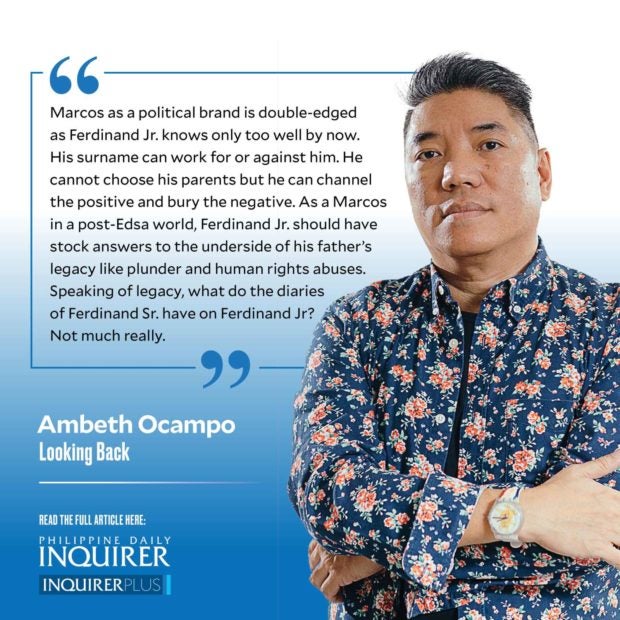 By declining to be interviewed by a “biased” Jessica Soho of GMA News and opting for the showbiz Boy Abunda of ABS-CBN, it is obvious that Ferdinand Marcos Jr. did not inherit his parents’ chutzpah, that extreme self-confidence and audacity that made Ferdinand Sr. face a hostile Ted Koppel of ABC News in 1986. All these are available on YouTube including Imelda Marcos squaring off with Winnie Monsod, disarming the “biased” host by declaring herself the original “pasaway” of the talk show title. Abunda over Soho was a spin on network rivalry that also exploits the divide in viewer preference based on education and socioeconomic class, thus pitting “masa” against “elitista.”

Marcos as a political brand is double-edged as Ferdinand Jr. knows only too well by now. His surname can work for or against him. He cannot choose his parents but he can channel the positive and bury the negative. As a Marcos in a post-Edsa world, Ferdinand Jr. should have stock answers to the underside of his father’s legacy like plunder and human rights abuses. Speaking of legacy, what do the diaries of Ferdinand Sr. have on Ferdinand Jr? Not much really. Stray references to the teenage Marcos Jr.: his dating preferences, his weights training (barbels in Malacañang), plots to kidnap him, girls in crowds swooning over his good looks, even defense program that named missiles Bongbong just as firecrackers are given names in Bocaue. One entry stands out, June 12, 1972:

“Imelda and I have been reminiscing in bed—the long tortuous road from Congress to the Presidency; the sacrifices, her tears, pain and hard work that went into our struggle for power. She put purpose into my life—the life of a spoiled bachelor congressman who was also a successful trial lawyer and a hero of the last war who tended to be too carefree and frivolous.

In eleven years I jumped from congressman to president.”

Then the reference to Marcos, Jr:

“Bongbong is our principal worry. He is too carefree and lazy. So I wrote him the fatal secret of the Marcos men—’they are brilliant but lazy.’ And they tend to be so unless they buckle down to a dogged unrelenting resolve to fight off sloth or a traumatic experience turns them into bitterness that congeals into a determined resolve to achieve and be victorious.

“I wrote him about me—how the political and financial reverses of father [Mariano Marcos] had made me bitter. It had come to a point where I had to get a scholarship to continue my studies. So I became a scholar—a senior scholar in law. I discovered that I had a brain and a photographic memory. And I made the best of it.

“I must tell him of his ancestors, his great grandfather of the revolution, the direct line of brilliant and brave men whose saving grace was the character of their women—how many failed like Antonio Marcos who had exceeded the record of excellence in scholarship of Rizal—but had not done much of his life because of wine, woman and song. The boy must realize his weakness—the carefree wayward ways that may have been bred in him.”

Two months later Marcos Sr. was at a crossroads, on Aug. 11, 1972, he wrote: “I told Bongbong and Irene the situation in which we are—the fact that we are now fighting for survival; that whether I retire or not our family is in danger of liquidation from either the communists or our political enemies; that if I retire I would be forced to fight for our lives … I would rather fight now by taking over the government by a proclamation of Martial Law; but that such a proclamation would succeed if the people are with us and the people will be with us if the new government is a reform government and we are all exemplars of the new society; so they, the children, must so conduct themselves that they will not antagonize the people.”

How Marcos Jr. turned out, whether he lived up to his father’s high expectations, is both a blessing and a curse.