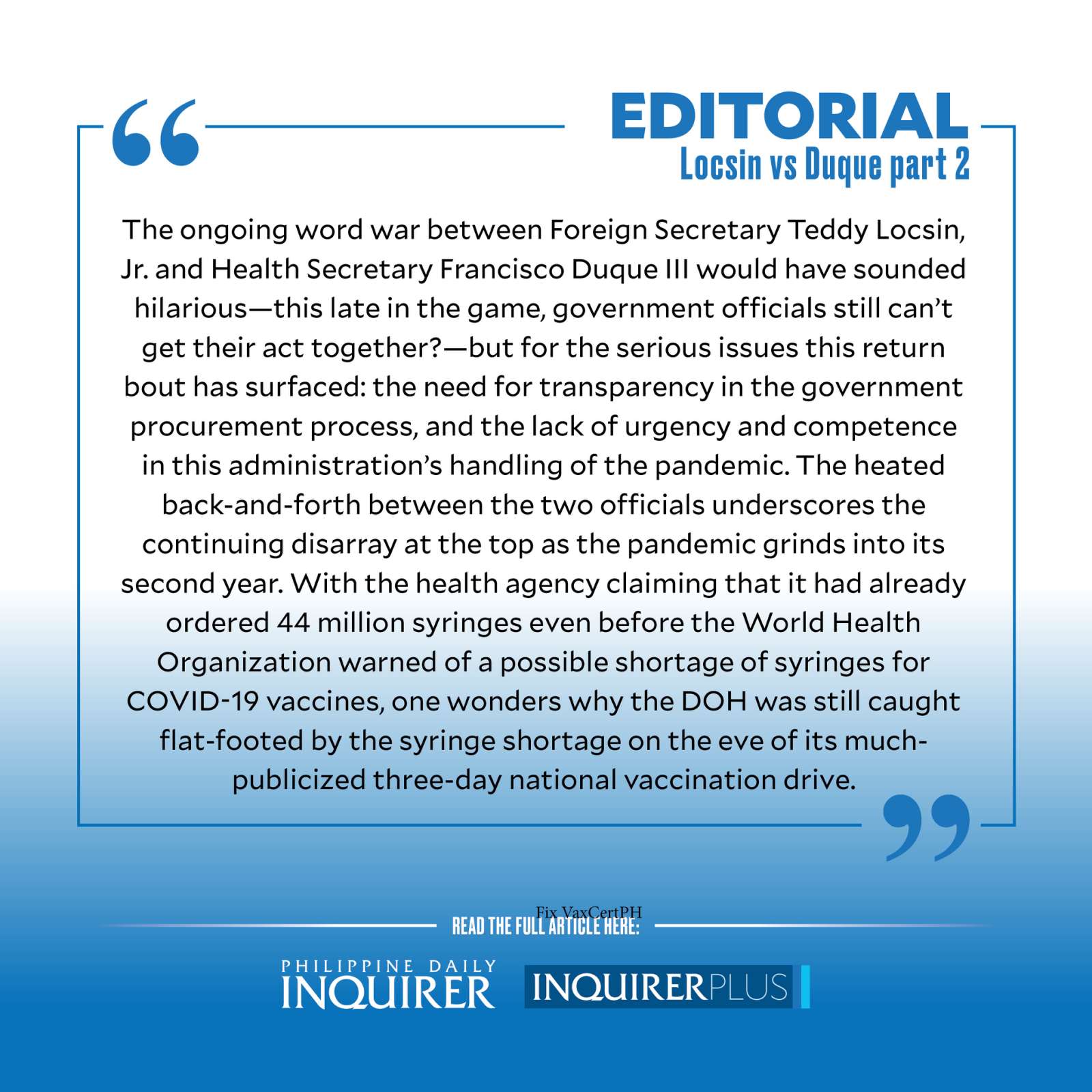 The ongoing word war between Foreign Secretary Teddy Locsin, Jr. and Health Secretary Francisco Duque III would have sounded hilarious—this late in the game, government officials still can’t get their act together?—but for the serious issues this return bout has surfaced: the need for transparency in the government procurement process, and the lack of urgency and competence in this administration’s handling of the pandemic.

Locsin fired the first salvo when he tweeted last Saturday that the health department had missed a possible deal for 50 million syringes, forcing the government to scale down its vaccination target from 15 million to nine million during its national vaccination drive early December, and to reset another vaccine campaign later this month. “We dropped the ball again,” Locsin said of the syringe offer in Washington, DC, that he claimed “PH agencies … refused to discuss.”

Hours later, the Department of Foreign Affairs (DFA) official described the health department’s offer to purchase syringes at 4.7 centavos each as “hallucinatory,” saying that “7 cents is the absolute lowest (cost of a syringe),” and that “UNICEF pays double.”

Calling out Locsin’s tweets as “baseless accusations,” Duque said that going beyond the approved budget for the syringes would violate Republic Act No. 9184 or the Government Procurement Reform Act, and open the health agency to graft charges. The supplier had questioned the Department of Health’s (DOH) maximum contract price for the syringes for being too low, he said, adding that Locsin had wanted to increase the budget to meet the supplier’s price offer.

The DFA secretary responded to that claim with a grim warning: “Don’t ever, Duque, ever, question my motives,” he tweeted Monday.

Both camps have also challenged each other to present documents to back up their claims. None have been presented so far.

The heated back-and-forth between the two officials underscores the continuing disarray at the top as the pandemic grinds into its second year. With the health agency claiming that it had already ordered 44 million syringes even before the World Health Organization (WHO) warned of a possible shortage of syringes for COVID-19 vaccines, one wonders why the DOH was still caught flat-footed by the syringe shortage on the eve of its much-publicized three-day national vaccination drive.

The furious and very public exchange between Locsin and Duque also highlights the lack of transparency in the government’s procurement process, the same convoluted and opaque procedure that had made possible the Pharmally case of billions of pesos splurged on overpriced pandemic supplies, and the mystifying lack of accountability among officials on top of the health and budget bureaucracies. Locsin’s recent tweet for Duque to “Make all purchases public” certainly applies retroactively to this unconscionable swindle of government funds amid a national health emergency.

And while Duque has loftily dissociated himself from that plunderous mess, his previous lapses cannot be so easily overlooked. Locsin’s initial tweet alluded to an earlier instance of Duque’s department “dropping the ball … First [with] Pfizer, then Moderna. Ok, I see the pattern.”

That was the first duel between the two, when in December last year, the DFA chief bared that the government had missed out on a chance to secure 10 million doses of Pfizer’s COVID-19 vaccine because “someone dropped the ball.” Sen. Panfilo Lacson expounded on this by saying that the country could have secured the delivery of 10 million vaccine doses as early as January this year, except that Duque had “failed to work on the necessary documentary requirements” needed for the Confidentiality Disclosure Agreement (CDA) with Pfizer. The delay resulted in the country lagging behind its regional peers in terms of acquiring the brand’s vaccines, Lacson charged.

Duque dodged the blame and cited protocols in signing the CDA. “There was no dropping the ball. Ang ginawa natin dito (What we did here was) due diligence. We cannot be reckless. We cannot be signing documents without legal clearance,” he said.

Could Duque have moved faster? Lacson asked the paramount question: “How many lives would (have been) saved” had the vaccines come in earlier and “been made available to Filipinos?”

The same question may be asked when recalling Duque’s many other egregious shortcomings, from refusing to close the country’s borders to China in early 2020 out of fear of offending this neighbor, to the maddening policy on face shields, the inability to whip PhilHealth into paying hospitals promptly, the delays in giving health workers their benefits and allowances, etc. Now, if Locsin vs. Duque part 2 is to be believed, the health chief remains unchanged in another aspect, two years into this calamity: his dawdling, lackadaisical attitude when deciding on such critical matters as vaccines and syringes.