Peru in the time of pandemic 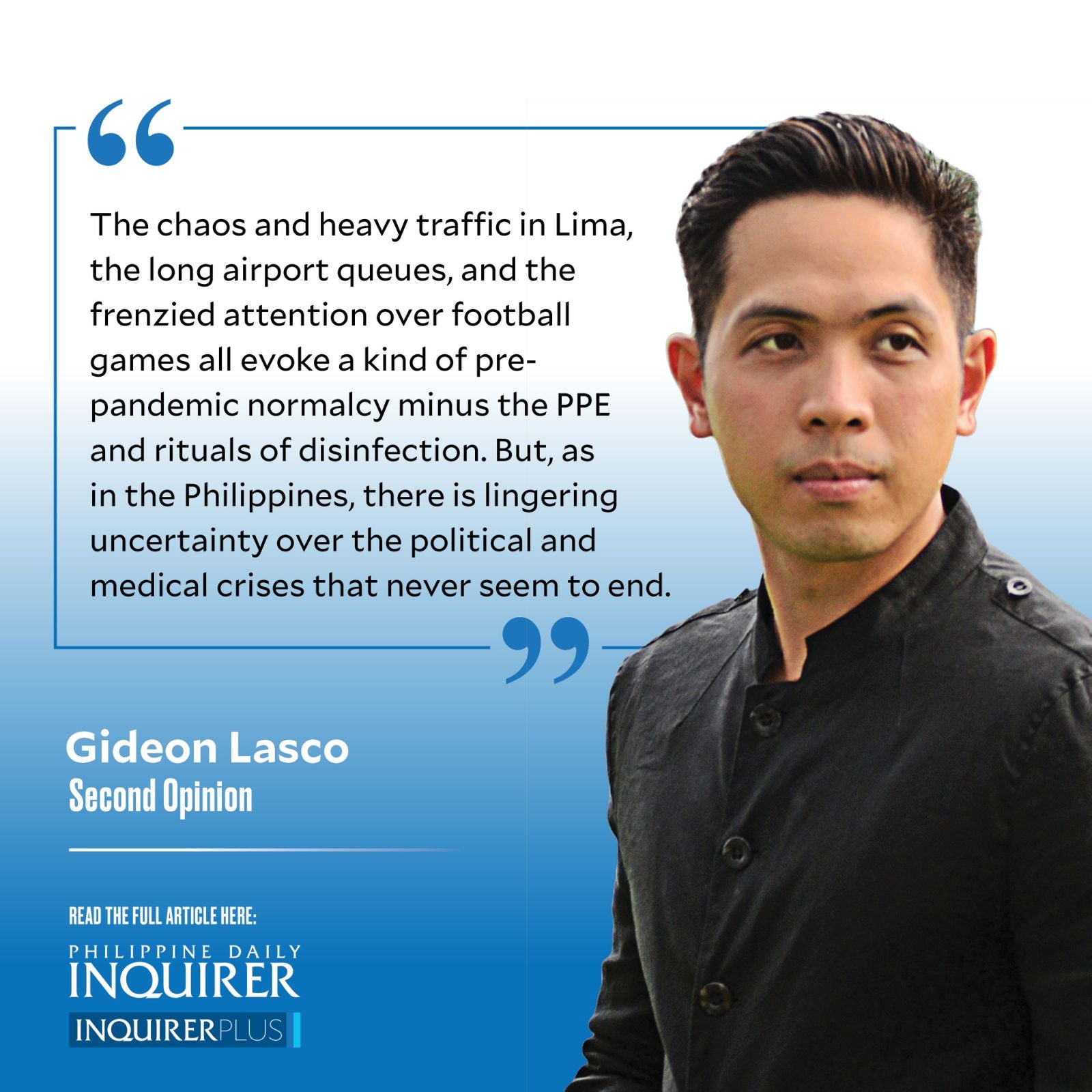 Lima, Peru—When people think of Peru, the Inca ruins come to mind, foremost of them Machu Picchu. Among the gastronomes, Peru would also evoke the culinary magic of chefs like Gastón Acurio; the ceviche; the cuy chactado and alpaca steaks; the coca tea and the Pisco sour. Personally, I come for the mountains, and over the past five years I’ve had a number of memorable ascents up Andean peaks, most recently the volcanoes of Arequipa: Chachani, El Misti, Ubinas, and Nevado Mismi.

But, of course, there is more to Peru than its food, culture, or mountains. Like many parts of Latin America, it is a country in transition, drawing striking parallels with our own experiences, including the ongoing pandemic.

The first parallel is Spanish colonization: If we had Miguel López de Legazpi, they had Francisco Pizarro, the conquistador who held the last Inca emperor, Atahualpa, captive, demanding a roomful of gold as ransom, only to kill the emperor anyway once the ransom was paid. Indigenous peoples in both countries were forced to work in haciendas, and, specifically in the Viceroyalty of Peru, in silver mines that generated so much wealth for the Spanish Crown as well as for the local elites (whose role in colonialism, I must add, is downplayed or ignored in history textbooks, just like in the Philippines).

Today, the imprint of Spanish colonialism is indelible, from the buildings and cathedrals of the Plazas de Armas to the language and the people themselves, a majority of whom identify as mestizo. Indigenous peoples, decimated by disease during the colonial encounter, comprise a minority, and even today continue to fight for their land and rights.

Unlike the Philippines which had to contend with another colonial power (the US)—and a devastating world war—Peru had a more straightforward path to independence, joining the wave of Bolivarian freedom movements in the 1820s. However, Peru’s postcolonial trajectory was anything but smooth, with territorial disputes and political strife. While Marcos was declaring martial law, Peru was ruled by its own dictator, Juan Velasco Alvarado.

Decades later, Alberto Fujimori would come to power, his corruption approaching Marcosian proportions. Despite Fujimori having been convicted of human rights violations and jailed since 2007, Peruvians remain divided about his legacy. His daughter Keiko came close to winning the presidency thrice, most recently this year in a highly polarized duel with the eventual victor, 51-year-old school teacher and union leader Pedro Castillo. Some see Castillo as a “Communist” and an existential threat; others see him as a historic campesino president. Such is the ongoing divisiveness that Castillo just survived an impeachment attempt, amid protests for and against him in Lima’s streets.

Despite its political upheavals, however, Peru has managed to be one of the fastest-growing economies in South America since the 2000s. Moreover, its post-COVID-19 economic recovery is projected to be one of the best in the region—even as it remains to be seen if this resurgence will arrest the long-running inequities exacerbated by the pandemic. While its famed restaurants like Maido and Central are now open, hunger and poverty are on the rise.

Thankfully, notwithstanding the slow pace of vaccination and allegations of corruption in the government’s pandemic response, COVID-19 cases have dramatically declined in recent months, perhaps because too many people have already had COVID-19 (at over 600 deaths/100,000 population, it is the country with the highest number of COVID-19 deaths per capita). Half-jokingly, young people tell me that they actually welcome getting infected, seeing it as their only way to get immunity.

Perhaps, too, a factor is the people’s high adherence to public health protocols even in regional cities like Huaraz: In indoor settings, double masking is the rule, and it is not an uncommon sight for people to wear those ridiculous face shields (known here as protector facial) on top of those double masks, even outdoors. Theater hygiene can reach absurd proportions, as when some restaurants and businesses insist on spraying the entering customers with some kind of disinfectant.

The chaos and heavy traffic in Lima, the long airport queues, and the frenzied attention over football games all evoke a kind of pre-pandemic normalcy minus the PPE and rituals of disinfection. But, as in the Philippines, there is lingering uncertainty over the political and medical crises that never seem to end.