Cleanliness as form rather than substance 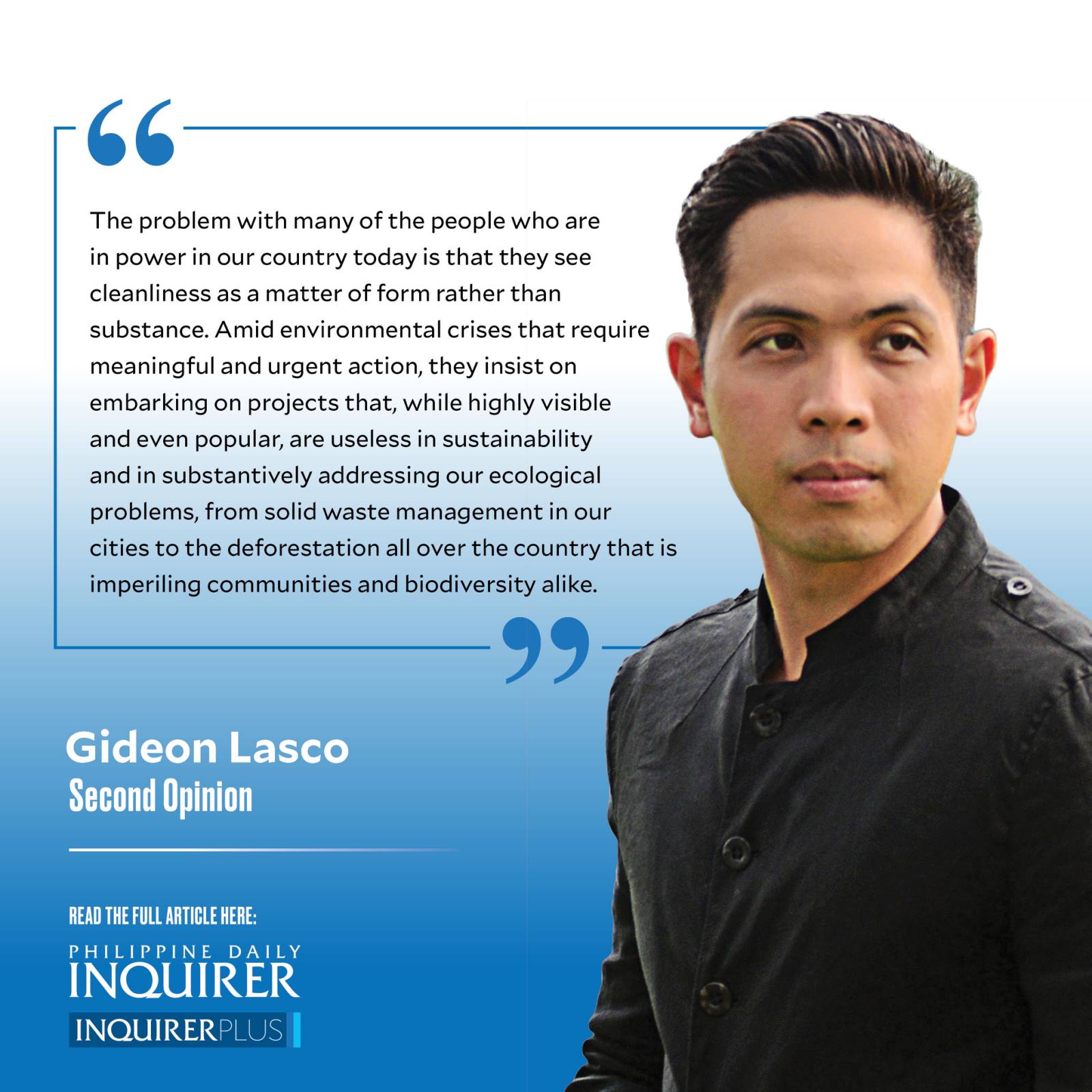 The problem with many of the people who are in power in our country today is that they see cleanliness as a matter of form rather than substance. Amid environmental crises that require meaningful and urgent action, they insist on embarking on projects that, while highly visible and even popular, are useless in sustainability and in substantively addressing our ecological problems, from solid waste management in our cities to the deforestation all over the country that is imperiling communities and biodiversity alike.

Consider, for instance, the dolomite beach in Manila Bay. When I first heard about it last year, I honestly thought it was a joke; an idea that, once floated, would be vetoed, just like many of the crazy proposals that have thankfully come and gone (e.g. Lito Atienza’s move to ban K-dramas in 2014). I mean, who in his right mind would dump dolomite in Manila Bay in the middle of a pandemic? And who will spend millions for such a wasteful endeavor?

The “beach nourishment project”—which came at the expense of quarrying a mountain in Cebu to extract an initial 7,000 metric tons, and millions of pesos in taxpayer money—was ruinous from the beginning, with its transportation damaging corals in Alcoy, Cebu, and its opening in the middle of a pandemic causing a gathering of people that violated the government’s own quarantine rules.

“It’s for mental health!” cried Harry Roque at the time, dismissing people’s mental health issues as simply a matter of scenery—never mind that it is the pandemic and the government’s failure to control it that have caused inordinate amounts of stress on the population. He is right about the value of beauty—but of course such argument is never raised by the government in its bid to build Kaliwa Dam or its acquiescence to mining projects that destroy the view all around the country.

“It passed the environmental impact assessment!” DENR officials thundered, notwithstanding concerns from the scientific community that, as the Institute of Environmental Science and Meteorology put it, the dolomite beach “is not cost effective and in the long run, environmentally damaging.” Other scientists warned that such “cosmetic beautification” will only temporarily hide—not solve—the problem of urban pollution, instead recommending that the government invest in rehabilitating mangroves.

Unfortunately, the likes of Undersecretary Benny Antiporda dismissed such science-based criticisms and even called our scientists “bayaran” in October last year, which is all the more galling in light of the chronic underfunding that has undermined research in the country. And in the following months, faced with the inevitability of the sand washing away, the government only doubled down on the dolomite beach, allotting millions more for its “replenishment.”

The dolomite beach is not the only example of politicians (and entrepreneurs) promoting a cosmetic view of cleanliness; as Imelda Marcos’ act of painting the grass green back in the 1970s show, this really is nothing new in our politics. But it is arguably more relevant today amid the climate crises and ever-increasing threats to our environment: Of the PAREx proposal, Ramon Ang claims that “It will not just ‘beautify’ the surroundings—it will rehabilitate the Pasig River and inspire urban renewal in Metro Manila.” Isko Moreno has made “beautification efforts” central to his political persona, but if the “redevelopment” of Arroceros Forest Park is any indication, this, too, is informed by a superficial environmentalism.

Unfortunately, while ecologically useless and even harmful, “beautification” has political efficacy. As the geographer Kristian Karlo Saguin pointed out in a recent Political Geography piece, also referencing the work of the anthropologist Noah Theriault, “Duterte’s interventions in Manila Bay and other places such as Boracay and Laguna Lake display a visual, affective, and aesthetic brand of green authoritarian/populist rhetoric.” That is, his acts—no matter how damaging and costly—tap into popular demands for order, discipline, and cleanliness. This seems to be validated (as he himself has been quick to tout) by the popularity of the dolomite beach.

Fortunately, President Duterte is on his way out. But as Moreno and the Marcoses remind us, he is not alone in embracing such “populist ecologies.” Who will provide us with badly-needed environmental leadership that sees cleanliness not as a matter of form, but of substance?